Anibal Sanchez drove in as many runs as he allowed, which wasn't many. The D-backs winning streak ended but their lead in the West remained the same. The Diamondbacks have made the phrase "save some runs for the next game" a credible concern this season. Here's how the team has fared on their next outing following a 10+ run game:

The team averages 2.8 runs the following game after scoring 10 or more. Head on over past the jump to educate yourself...

Sitting amongst the fans at Chase Field tonight I can honestly say that Diamondbacks fans found themselves cheering more for free t-shirts and a ketchup hot dog rather than the actual game. Despite an early Justin Upton home run in the first inning, many of us were sulking back in our chairs as we watched Ian Kennedy struggle to find the strike zone and a D-backs offense that couldn't figure out Anibal Sanchez.

As the offense was left off-balance throughout the game, Kennedy had problems of his own on the mound. He found himself pitching from the stretch in every inning except the first as the Marlins had a runner in scoring position in four of the five innings that Ian pitched. In the end, Kennedy allowed three runs, struck out four and walked three. He threw two wild pitches and hit a batter. We had the pleasure of seeing more groundballs than flyballs, but that's really the only silver lining of his performance.

After Kennedy, Esmerling Vasquez and Aaron Heilman took turns allowing more blows to the chances at a comeback. In the 6th inning, Esmerling allowed a single to Emilio Bonifacio with one out. With Anibal Sanchez likely ready to bunt at the plate, Vasquez threw a couple of pickoffs to keep the speedy Bonifacio in line. Unfortunately, Juan Miranda wasn't on the same page and the pickoff throw sailed into foul territory and the runner moved to third base. Anibal Sanchez reverted back to his RBI form and grounded out to Ryan Roberts to score the 4th run of the game. Then Aaron Heilman came on in the 7th inning and allowed a two-out home run to the equally evil Sanchez, Gaby.

The D-backs made a run in the bottom of the 7th inning and had runners on first and second base but Xavier Nady's at-bat was a pinch hit fail, bringing his PH total for the year to an unimpressive 2-11. Arizona tacked on their second and final run thanks to a solo shot from Kelly Johnson in the 8th inning; both Upton and Johnson have homered in consecutive games now. It prompted the Marlins to warm-up Leo Nunez who would eventually pick up his 19th save of the season with an easy 1-2-3 to end the game. The Marlins victory snaps a two-game losing streak where they were outscored 23-4 and outhit 36-6.

Fangraphs tells the whole tale better than a recap sometimes. 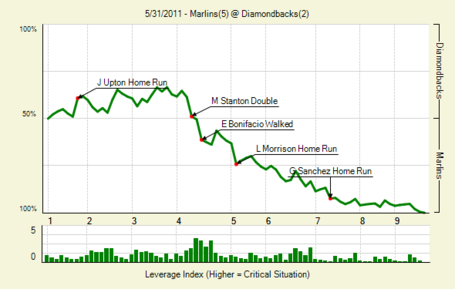 A decent GDT with over 700 comments among a team of 30 players:

Comment of the night goes to IHSB because it fits the theme of the game and recap very well:

THIS IS NOT TORTURE. WE ARE IN FIRST PLACE. WE ARE NOT GIANTS FANS.

Tune in tomorrow at 4:40 PM MST (yeah, don't ask why) as Dan Hudson (6-5, 4.13 ERA), faces off against the very hittable Javier Vazquez (3-4, 6.02 ERA). Hudson labored through his last outing, allowing five runs on eight hits but he's had some good numbers at Chase this year with a 3.29 ERA. Meanwhile, Vazquez has been pitching extremely well recently as he's only allowed two runs in his last 13 innings with 10 strikeouts and 3 walks.