After a marathon (kind of) last night, the Diamondbacks took a red eye to San Diego. Awaiting them were not the cool and magnificent things that people tell me that San Diego has, but I have yet to see. No, awaiting them are the San Diego Padres, who after Adrian Gonzalez's Diaspora, are a shell of the team that made the unexpected run last year.

Tonight, Armando "Don't call me Andres" Galarraga went up against Tim "Animal Crackers" Stauffer. One of these things was better than the other, and not in a good way. But sometimes, you get a glitter of hope that lets you know that things are good in the world. Then like a half hour later that hope is stomped on by a tag-team of Pablo Sandoval and Prince Fielder.

Other than our old friend Wil Vegetable robbing CY on the first at bat of the game, nothing much happened for the first two and a half innings. After walking Eric Patterson and allowing Rob Johnson to single, the following happened:

The less said about that, the better. Wil then hit a sac fly to make it 2-0. No further damage was done that inning.

Galarraga walked the first man in the second, third, and fourth innings. He had more trouble finding the plate than a blind man at a dinner party. It got so bad that he walked Brad Hawpe. Between Hawpe now and CarGo and Ian Stewart last series, we seem to like to walk guys who don't usually walk. I'm all for opening people up to new and different experiences, but COME ON!

After some tension which included the bases being loaded (none of which came on hits), Armando, somehow, got out of it. I suspect one of those Blood Oaths that Mark Grace pretends not to like.

The top of the fifth provided some comedy in the form of Cameron Maybin trying to track down a ball hit by Miranda which lead to a double. As you might guess, that run didn't come to score.

Galarraga did not last through the fifth. After a double, a ground out and a walk, Chase Headley got a single to make it 3-0, and Armando was gone. His final line: 4.1 Innings, 3 hits, 2 earned runs, 6 walks and 2 strikeouts. To translate: Crap, Alright, Could Be Worse, Bollocks, and WTF IT'S THE PADRES? Josh Collmenter came in and struck out Hawpe and Maybin (See Armando? It's not that hard).

Montero got a double in the top of the seventh, but on the next ball in play he saw something shiny at third base and ran into an easy out. Ryan Roberts got to second on a wild pitch and Juan Miranda was walked and that was the end of Animal Crackers. His final line was I don't care look it up yourself. Cory Luebke came in and proceeded to walk Parra to load the bases.

That was all for him as Luke Gregerson came in to face a pitch-hitting Xavier Nady, which makes as much sense as having Xavier Nady as a pinch-hitter against a righty. Oh look, he grounded out after hacking at the first pitch. What an unexpected outcome!

Our trend of making things kind of interesting but never following through continued in the eight. Kelly Johnson got a much needed hit off of Mike Adams. After an out, Stephen Drew walked and the tying run was up... and it summarily grounded out. Thanks Miggy.

The top of the ninth inning brought more intrigue. Heath Bell came in and walked Roberts and Miranda back to back. Parra then for the second straight night ended a shutout against a rival's closer with a double, scoring Roberts. Russell Branyan struck out swinging, as is his right. Chris Young also exercised this freedom, leaving Kelly Johnson with all our hopes and dreams in his hands to either crush or help them come true. He then hit a grounder to third AND HOLY CRAP WHAT JUST HAPPENED BUT TWO RUNS SCORED. (breathe) Okay, Chase Headley Lamarr threw low and it got away from the first basemen and both Miranda and Parra scored. Justin Upton then hit one hard, but right at the second baseman.

Esmerling Vasquez got through the bottom of the inning cleanly and WE GOT EXTRA BASEBALL FOLKS!

Top of the Tenth included our old friend Chad Qualls. In some cruel irony he got a 1-2-3 inning. WHERE THE (many many bad words )WAS THAT LAST YEAR? Anyway, Vasquez went out for the bottom of the inning, which seemed like an odd decision. It became more odd when he hit Jason Bartlett. After getting Ryan Ludwick to fly out, he walked Chase Headley Brad Hawpe grounded into a fielders choice and a the result of a very tense at bat with Maybin was another walk. Bases loaded, and Gibby put Sam Demel into the game. Demel got Alberto Gonzalez to fly out. On to the eleventh! Qualls got another fairly easy inning.

I'm not going to write anything more until something happens.

That didn't take long. Bottom of the eleventh, Demel in for another inning. Two singles, a groundout and a questionable catcher interference loaded the bases for Chase whateverhisnameis. He worked the count to 3-2, and in a situation where a strike was needed more than anything else.... he walked him. The rare walk off walk. 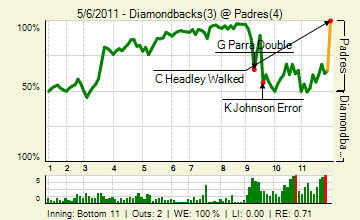 This game was physically and emotionally draining, so I award COTN to kishi, for something only vaguely related to it (plus, he was spouting TRUTH!)

Wearing the Yoda back pack is not punishment, those things are awesome.

Tomorrow, Daniel Hudson will face off against Dustin Moseley. First pitch at 5:35 PM Arizona time. Have a good night. I'm going to go sit in my geodesic dome and read some Hermann Hesse.