Share All sharing options for: Diamondbacks 4, Rockies 3: He who laughs last, laughs longest

The D-backs trotted out a lineup this evening that has been referred to as the "B-Team" as well as the likes of the not-so-fan-favorite Joe Saunders. As the Colorado Rockies stormed into town on a mission, bringing some of the sexiest looking pitching numbers we could only wish for, a lot of fans set they're expectations low for this game and the series. Not so fast...

It was a back-and-forth type of game with both teams seemingly on the bases for the entire duel. The Rockies struck first in the second inning thanks to some handy fun-duh-men-tells. After a leadoff walk to the increasingly unlikeable Carlos Gonzalez, he promptly stole second base on the very next pitch and became even more evil. Jose Lopez then found some serviceability inside of him and quickly moved Gonzalez over to third base without a hitch. In comes Mr. Spilborghs with only one out and boom goes the sacrifice fly and in comes the first run of the game.

Fast-forward to the bottom of the third inning as Henry Blanco gets the opportunity to leadoff. He's been riding an 0-10 hitting streak and now has to face Jorge De La... wait, can it be? YES!!!!! There is so much joy running through my body! His first hit! His first home run! Tie game!

But the D-backs weren't finished. Joe Saunders kept the momentum going, floating a hit into left field for his first hit of the year. Smiles were suddenly appearing on D-backs fans, players, and coaches. It was a magical thing. Eventually, we found ourselves knee high in a bases loaded extravaganza with Xavier Nady at the plate. In similar, but not nearly as exciting, fashion to Blanco, Nady lined a hit straight up the middle to plate two more runs to give the D-backs a cosy 3-1 cushion. It would be a short lived lead that would slowly dwindle away.

Colorado responded to the "B-Team" beatdown they were getting by knocking in two more runs in the 4th and 5th innings respectively. Carlos Gonzalez tooted his own horn with a leadoff home run and Jonathan Herrera hammered a RBI triple to knot the game at 3-3.

The rest of the game would stay fairly quiet as both starters exited with similar numbers:

The fate of the game was left in the hands of our "work in progress" bullpen. Esmerling Vasquez and David Hernandez kept the score tied with two very important outings. Esmerling looked extremely comfortable and was quite the serviceable 7th inning guy given the nature of the situation. He had a clean frame, striking out two, and stranded the single Joe Saunders had given up. Hernandez allowed a screaming Todd Helton single and walked a pair of a batters (one IBB to CarGo) to load the bases. It was a scary moment but eventually he showed us why the Mark Reynolds trade wasn't a train wreck and snuck out of the jam without any harm done to the score.

The bottom of the 8th inning started with a 3-0 count to Justin Upton. He had been 3-7 with a home run prior to the at-bat when swinging on 3-0 counts so Gibson did not hesitate to give him the green light. It payed off as the third leadoff home run of the game, and the game winner, was drilled right field. J.J. Putz cleaned up the ninth with only minor scraping from the Rockies to record his seventh (still perfect) save of the year. 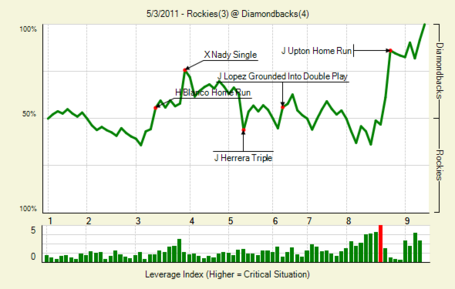 A hefty bulk of a GDT with nearly 1K comments. Here's the cast:

COTN was a tough call as there were a few gems but this was easily the most widely regarded:

Man this year is crazy

-Earthquake in Japan
-Osama bites it
-Henry Blanco gets 2 hits

So check back again tomorrow at the same place, same time, for a matchup that sees Barry Enright (1-2, 5.76 ERA) pitted against Jhoulys Chacin (3-2, 2.91 ERA). Enright looks to carryover some of his success from last week and keep up the fast-paced tempo that he brought in his last outing. Meanwhile, Chacin struck out a season-high eight batters in his last outing and walked none.