Diamondbacks 7, Astros 6 - Juan for the Money, Two for the Show

Share All sharing options for: Diamondbacks 7, Astros 6 - Juan for the Money, Two for the Show

The Diamondbacks are on a roll lately - winners of 11 of their last 13, they've won all six of their last one-run games, and they just took three of four from the Colorado Rockies to take a hold on second place in the NL West. But they've shown in the past that they can beat the big teams and struggle against the sub-.500 teams, so this series will be a test.

Early on, the game certainly looked like a laugher for the Houston Astros. Dan Hudson struggled and gave up six runs, but Juan Miranda led the charge and brought the team back from the brink of defeat. Some key plays in the 7th and a solid outing by the bullpen led the Diamondbacks to their largest comeback victory in nearly four years. Read on for details.

Daniel Hudson's 1st inning woes returned. Despite him flying to Houston yesterday and not getting in at 3am with the rest of the team, he struggled early and often, and so did his defense. In Houston's half of the 1st inning, Michael Bourn led off with a single and scored on a double by Hunter Pence. Carlos Lee then singled but Kelly Johnson's error allowed Pence to score and give the Astros a 2-0 lead. They added on three more in the 2nd inning. With runners on second and third, Bourn doubled them in and then Jeff Keppinger singled on a ball that Chris Young should've caught and Bourn scored again. The Diamondbacks found themselves down 5-0 after two innings, and it was 6-0 after four innings because "there's that man again" Bourn singled in Clint Barmes (again).

As Hudson struggled, Astros starter Brett Myers had Arizona's number for the first four innings. But the momentum started to shift in the 5th inning. Miguel Montero led off with a walk, and Juan Miranda launched a high fastball to the bleacher seats in right field to put the Diamondbacks on the board, and down 6-2 we're in grand slam territory. In the 6th inning, after Stephen Drew led off with a walk, Juan Miranda again homered to right field on a high fastball. Not only was the pitch nearly identical, but the home run landed exactly four rows behind the first one! It was Miranda's first career multi-home run game and what a time for it to happen. Suddenly Houston was up only by a score of 6-4.

Dan Hudson made it through the 6th inning, allowing six runs (five earned) but battling it out, getting through and getting to the A-level bullpen. Arizona's offense put him in line for the win when they scored three more runs in the 7th inning in interesting fashion. First, pinch hitter Willie Bloomquist singled to right, Ryan Roberts followed suit, and Kelly Johnson laced a single of his own to score Bloomquist and make the score 6-5. Bloomquist and Roberts showed smart baserunning by advancing from 1st to 3rd when they could. Stephen Drew walked on a couple of close pitches to load the bases with one out. Then with Chris Young at the plate, he hit a very slow roller to the third base side that reliever Wilton Lopez shovel-passed to catcher Humberto Quintero. Unfortunately, Quintero had slipped and found himself in an awkward position blocking the plate and giving Roberts no other choice but to knock into him to get to home, and Quintero fell backwards in a manner eerily similar to the way Buster Posey was injured Wednesday night. Roberts scored and right behind him was Johnson to put the Dbacks up 7-6 at the expense of Quintero. He was helped off in the same manner Posey was - putting no weight on his right leg - but luckily so far, it has only been announced as a sprained ankle.

Suddenly, the "Arizona Comebacks" had a lead! Gibson went to Kam Mickolio for the 7th inning, and Mickolio owes Gerardo Parra a steak dinner for catching three line drive outs hit in his direction. David Hernandez pitched the 8th inning and gave up a hit and a walk but escaped his own jam, and turned it over to "The Easy Button" J.J. Putz. After two easy outs, he walked Hunter Pence, who then stole second base, but Carlos Lee popped out to Johnson and Arizona's largest comeback win of the year was in the bag! 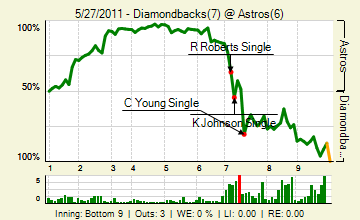 The Diamondbacks' comeback tonight was the largest comeback victory in nearly four years, since June 19, 2007 against Tampa Bay. (The game against the Brewers, in 2008, was only a 5-run deficit.) Interestingly, the Diamondbacks have never come back from greater than a 6-run deficit in their team history. There were many factors tonight that contributed to this victory. There's a resilience of this team that we haven't seen the past two years, and Kirk Gibson walked up and down the dugout in the 3rd inning to pump his team up. He also kept Hudson in the game when he could've pinch hit for him in the 4th inning, giving his bullpen two more innings of rest to line up the proper guys. The bullpen did their job and so did all the small ball - solid hits the other way, taking the extra base - in the 7th inning. There's little doubt that we don't win this game a year ago. This is a much different ball club, and it's certainly fun to watch.

UAwildcats ran away with COTD with 8 recs for this gem:

Takeaways from this game so far

1. Juan Miranda may actually be a beast

2. Being a baseball catcher is a really crappy job.

Well, this certainly started my weekend on a high note! Zach Duke returns tomorrow, but there's no word yet on who will go where to make this move. Tomorrow's game starts during the FOX national blackout window, so it's radio only. We've now won 12 of our last 14 games. Back at it tomorrow!