Diamondbacks 6, Rockies 3: The Return of Pwnings

Share All sharing options for: Diamondbacks 6, Rockies 3: The Return of Pwnings

Micah Owings pitched 5 solid innings against the team that once drafted him, the Diamondbacks scored enough runs for tacos, and the bullpen held on enough to win. And then, just for good measure, when the bullpen faltered, the offense scored a few runs more.

After trading zeros for the first 3 innings, Miguel Montero got the Diamondbacks on the board in the top of the 4th inning, with a 3 run homer, driving in Stephen Drew and Chris Young, who had both taken walks. He had just drawn my ire in the Gameday Thread for swinging at a 3-1 fastball high and out of the zone (directly after 2 walks) but a home run is a good way to atone for such things.

The Rockies struck back in the bottom of the 4th, Carlos Gonzalez singling by Kelly Johnson into RF, followed by a Troy Tulowitzki RBI whack and a Todd Helton bloop that was muffed by Upton in RF. At that point, the Dbacks' win expectancy was back to 55% after having been at 79.4% immediately after Miggy's home run. However, Ty Wigginton grounded into a double play, and Chris Iannetta flied out to end the threat. That was the last time the Rockies threatened until the 7th.

In the top of the 6th, Chris Young singled to lead off the inning. After stealing second, Iannetta's throw (which easily beat CY) went to Dexter Fowler in CF, and Chris advanced to third. Sorry, Iannetta; even the Coors Field scorekeeper couldn't help but rule that an error. With two outs, Melvin Mora...did something right! He singled on a BABIPy ground ball into left field. He, however, immediately followed that up by doing something wrong, getting thrown out handily trying to stretch the single into a double. But CY had scored the 4th run, which would end up being all we needed.

Aaron Heilman gave us a 1-2-3 bottom of the 6th, with a little help from Miggy, who made a fantastic play to rob Tulo of a bunt single for the 3rd out. Sean Burroughs had a pinch single to lead off the 7th -- his first Major League hit since June of 2006, but nothing came of it. Esmerling Vasquez came in to pitch the bottom of the 7th and went wild, walking Todd Helton and Dexter Fowler around a Wigginton single and Iannetta strikeout. With the bases juiced, Vasquez got Jason Giambi to sac fly to Chris Young for the second out, then Number Nineteeeeen himself, Ryan Spilborghs drove in another run on a single, but Jonathan Herrera grounded out to end it. Joe Paterson made Carlos Gonzalez look silly in the bottom of the 8th, but David Hernandez got Tulo and Helton out.

Against Huston Street in the top of the 9th, the Dbacks tacked on two runs. Xavier Nady, who'd come on in relief of Juan Miranda, squirted a grounder single to right field with one out, and then with two, Kelly Johnson deposited a fastball beyond the center field wall. Putz having worked quite hard lately, Hernandez stayed in to get the 5 out save, his first with the Dbacks and the 3rd of his career.

Micah Owings' final line was 5 IP and a single earned run on 4 hits and a walk, matched against 3 strikeouts. Micah's W was his first in over a year, since May 5th of last season in relief. In fact, it was his first win as a starter since July 4th of 2009. Miggy and CY had 2 hits each, and CY also had a walk. 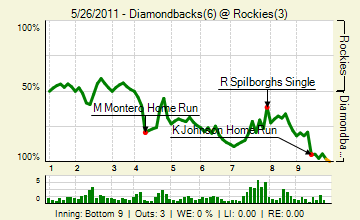 Comment of the day, with 6 recs, went to Jim:

Well, we take 3 of 4 from reeling Colorado, and have now won 11 of 13 for the first time since that glorious April of 2008. Next up, the Diamondbacks take on the Houston Astros, with the worst record in the NL and the second worst record in the majors (to theTwins). Let's hope that we can keep on rolling and not overlook this series, starting with Daniel Hudson and Brett Myerstomorrow. Go Dbacks!