Diamondbacks 4, Rockies 12: A Load Of Balls

Share All sharing options for: Diamondbacks 4, Rockies 12: A Load Of Balls

It's funny how a game can turn. This one looked to be leaning heaving toward the Diamondbacks, as the curse of the opposing pitcher continued, with Jorge De La Rosa forced out of the game one out into the third inning. Before the end of that frame, Arizona were 3-0 up, and looking forward to taxing the Colorado bullpen. However, things didn't quite work out that way. Josh Collmenter couldn't throw strikes, the Diamondbacks bullpen proved to be the one which was taxed, Juan Gutierrez got injured, the Rockies scored the next twelve runs, and the six-game winning streak evaporated like Charlie Sheen's marketability.

Yuck. Wish the rain had kept coming down.

Both starters traded zeros for the opening couple of frames, but the Diamondbacks struck first. Ryan Roberts got a one-out double, and after a Justin Upton walk, a double steal put men on second and third. De La Rosa appeared to have an issue with his elbow, and was lifted while facing Chris Young. The reliever walked Young to load the bases for Nady, who grounded out, but did at least get the run in. Melvin Mora received a gift-wrapped present from the ever-generous Coors Field scorers, when his grounder was botched by Troy LOLowitzki, but inexplicably scored as a two-RBI single, and Arizona were three runs up.

Josh Collmenter got through three without major trouble but his scoreless streak as a starter came to an end in the fourth with a pitch up, which Carlos Gonzalez deposited off the facade of the second deck in RF. Another home-run made it a one-run game, and Collmenter didn't make it through the fifth. He retired the lead-off batter, then an error by Xavier 'supposedly better at 1B than Miranda' Nady, a squib off the hands and a walk ended Collmenter's day. He worked 4.1 innings, allowed five hits and two walks, leading to five runs, two earned; the key number is he threw only 51 of 87 pitches for strike - that 58.6% rate, is far below the 71.3% he managed previously.

There was absolutely no relief out of the bullpen either, as Kam Mickolio, fresh off the bus from Reno, came in with a one-run lead but the bases loaded. Now, you might think it was a bit of a questionable decision to use someone sent down for ineffectiveness and wildness, in such a high-leverage situation for his first outing back. And you'd be dead right. Mickolio allowed all three inherited runners to score. The first came home on a bases-loaded walk - Arizona's ninth of the year, the most in the majors with Cincinnati the sole franchise to have more than five. Then he allowed a sacrifice fly and an RBI single, to give Colorado a two-run lead.

Who would you want to see next out of our 'pen to keep the game close? If you said, "Juan Gutierrez," a) you were right, and b) I'd like to thank Mrs. Gutierrez for stopping by the SnakePit. He faced two batters, failed to retire either of them, then clutched at his shoulder and was taken from the game, as it was our turn to lose a pitcher to injury. No word at this point of his prognosis - it didn't look good. Next up, coming in to the unenviable situation of second and third, no outs, was Joe Paterson. He allowed both inherited runners to score, and also surrendered the first hit of the year to Tul-0-fortheseason Tul-1-fortheseason. Aaron Heilman? Five runs in his inning.

Meanwhile, the Diamondbacks were singularly failing to do anything of significance against the Rockies 'pen. They faced one batter over the minimum from the fourth through the seventh, thanks in part to Melvin Mora getting thrown out at third after a wild pitch caromed straight back to the Colorado catcher. The only other hit over that time was a single by Collmenter. Justin Upton doubled to lead of the eighth, and subsequently scored Arizona's fourth run. He had two hits and a walk, with Ryan Roberts and Mora also getting two knocks apiece [more so in the former's case than the latter]. 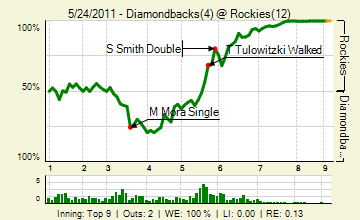 YOU OVERRATED HACK WITH THE MUSIC TASTE OF A 13 YEAR OLD GIRL… ACTUALLY THAT’S AN INSULT TO 13 YEAR OLD GIRLS BECAUSE THEY ACTUALLY HAVE DIGNITY AND SELF RESPECT AND ARE GENERALLY LESS WHINY AND DON’T ALWAYS GET WHAT THEY WANT. "WAAAH MOMMY I DON’T WANT A ERROR"

5:40pm is the scheduled start for the next game, so I'll be back with the GDT for that, around 5pm - will the weather hold up? Will our bullpen?