The Diamondbacks and Saves: A Blast From the Past

Share All sharing options for: The Diamondbacks and Saves: A Blast From the Past

So I got bored again and started to think about how awesome J.J. Putz is. He's already a perfect 9/9 in save opportunities and, barring an injury, will probably be our first full-time closer in over three years. Thinking about that, I decided to investigate into just how well our "closers" have fared up to the leagues best throughout our franchise's history. Needless to say, we're very lucky to have J.J. Putz right now... 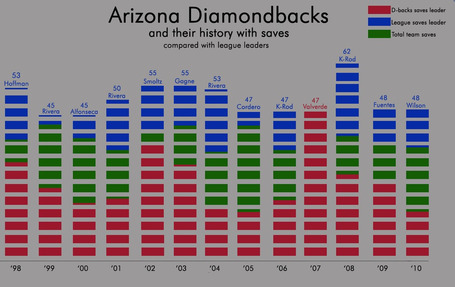 So, please, pardon the cheesy Craig Robinson ripoff and follow me after the jump for more analysis...

Nearly every season in our brief franchise's history has seen a closer-by-committee. It even got to a point in 2005 where three of our relievers were getting saves as a group. Jose Valverde, Brandon Lyon, and Brian Bruney had 15, 14, and 12 saves respectively that season. Matt Mantei made some strong runs in 2000 and 2003 but injuries plagued him during his entire tenure with the team. Gregg Olson was a solid closer in 1998 but, well, no one remembers a thing about him. For the most part, there's only two major seasons for us to take a look at, 2002 and 2005:

In 2002 Byung-Hyun Kim, fresh off of an insane World Series, was tabbed with closing games for another season as Matt Mantei had undergone Tommy John surgery. Kim responded by setting a franchise record 36 saves and posted a 2.04 ERA for the season. Additionally, Kim had 92 strike outs in just 84 innings for a scary good 9.9 SO/9 rate. Also, on May 11th, 2002, against the Phillies, he became the 32nd Major League pitcher to pitch an immaculate inning. He was even an All-Star. He did it all. The organization responded by converting Kim into a starter to begin the 2003 season and then traded him for Shea Hillenbrand early in the season.

In 2007, Jose Valverde was officially handed the closer's role over Jorge Julio. Julio had taken the spot the season before when Valverde was considered to be "too wild and inconsistent" but he too struggled with command and was chased out of the spot by the end of 2006. After grasping the spot once again, Valverde proved his worth and not only passed Matt Mantei for the franchise record in saves (78) but lead the entire league with 47at the end of the season. The organization responded by trading Valverde in the offseason for Chad Qualls, Chris Burke, and Juan Gutierrez.

Aside from that, one other thing pops out at me when I see the graph. If your last name doesn't end in Rivera or Rodriguez, you're probably not going to lead the league more than once. The save is such a trivial stat at times and can be relatively misleading. For example, Mariano Rivera already has two "one-out saves" this season. A lot of people argue that a save isn't even meaningful unless the threat is truly there. Whatever the case is, I wanted to find out how often teams are represented with single season save leaders. Here's the top 97:

Not surprising to see the Padres (Hoffman) and the Yankees (Rivera) well represented. I was a bit surprised, however, that the Blue Jays and Orioles only has one and that Tampa Bay has three.