Share All sharing options for: Diamondbacks 1, Dodgers 0: One Hit Won-ders

For those that were previously unaware, the Diamondbacks' tomahawking Josh Collmenter made his first Major League start today. What better place to do it than on Fox Saturday Baseball, in front of the fervent Dodgers fans in the West with their eyes glued to Fox Saturday Baseball? Saying that Josh earned himself another start is probably in the running for understatement of the year, as he absolutely shut down Los Angeles during the six innings he was permitted to go tonight. Hit the jump for s'more details; if you'd like a tl;dr version, Collmenter kicked some serious Dodger tail, the offense sucked, and we won (in our sixth consecutive one-run game, by the way).

It's almost as if the offense was as eager as all of us were to see what Collmenter could do in his first start (albeit, not his first appearance), quickly going down in order in the top of the first. The Fox cameras cut to a shot of Collmenter getting off of the bench and making his way to the hill, and he looked surprisingly cool and collected, taking a quick swig of Gatorade before trotting out to the mound. He wasted no time in shutting down the Dodgers, either, retiring the top of the order 1-2-3 as well. A leadoff double in the following inning by Stephen Drew led to a small bit of awesome (or sadness, depending on your team allegiance): with Droo on second, the Dodgers' starter Chad Billingsley quickly whipped the ball to second in a pickoff attempt. Believe it or not, pickoffs are remarkably more successful, on average, when there's someone on the base you're throwing to. The ball sailed through the gap between Jamey Carroll and Aaron Miles, advancing Stephen to third. Miguel Montero walked, and Melvin Mora scored Drew on a sacrifice fly to right. Oh, and both Russell Branyan and Gerardo Parra struck out consecutively to end the inning.

The game was deathly quiet for a long while after that. Not, like "yeah, a homer here, another run there, but still quiet"-quiet, but absolutely silent. From the bottom of the second until the seventh, the two teams combined for just two hits, both from Los Angeles (including a double from Chad Billingsley). There're really two different ways to look at this: more of the same for Arizona, with solid pitching and no offense, or the optimist's view, Josh Collmenter was dominating when all we really hoped for was averageness. At this point, however, the Diamondbacks had the 1-0 lead, so it's difficult to side with any sort of pessimism in a case like this. As sad as it was to see Captain Enright get relegated to Triple AAA Reno, if this is the sort of performance (ok, maybe not this exactly, but anything similar)  that we'll be seeing in lieu of Barry... well, it certainly softens the blow. Collmenter shook Gibby's hand in between the sixth and seventh, signaling the end of his first start. Six innings, no runs, two hits, no walks, and three strikeouts, throwing just 71 tomahawks pitches? Can't say I saw that coming. According to Jim, it's the third best "first start" in franchise history, behind only Geraldo Guzman (eight innings, one run) and Brandon Webb (seven innings, no runs).

In the top half of the seventh, the Diamondbacks had their first baserunner since the second, with Stephen Drew walking with one down. More of the same, though, as a Montero strikeout and Mora groundout ended yet another Arizona frame with a goose egg to show. Aaron Heilman (who was one of the possible rotation replacements after Enright's demotion) came into the game as Collmenter's replacement. He, much like Josh before him, kept LA off of the basepaths, continuing the new Diamondbacks modus operandi of "solid pitching, solid bullpen, sucky hitting". Unfortunately, Billingsley remained in the game, continuing his MO of "own Arizona". Arizona failed once again to get anyone on in the eighth, as Branyan (now hitless in his last twenty at-bats), Parra, and Juan Miranda went down in order. David Hernandez came in to pitch the bottom half of the eighth, immediately surrendering a ground-rule double to James Loney. Tony Gwynn, Jr., pinch-ran for Loney and was subsequently advanced to third on a bunt from former-Diamondback Rod Barajas, bringing pinch-hitter Dioner Navarro to the plate. Hernandez struck Navarro out on three pitches, then got Jay Gibbons (who pinch-hit for Billingsley) to fly out to right. Disaster averted!

In the ninth, once again, Arizona's bats were quiet, going down 1-2-3 (with two strikeouts, too - grrrrr). JJ Putz was called in to shut the door on the game and end this losing skid that the Snakes have been on as of late. It looked like it wouldn't be too fun at first, with a leadoff single from Jamey Carroll. Aaron Miles failed to bunt him over at first (striking out later in the at bat), bringing hot-hitting Andre Ethier to the plate. Putz put a few pitches right down the pope, yet Ethier managed nothing more off of them than foul balls. The entire at-bat was a battle, unfortunately one ultimately one by the batter, as Ethier was issued a free pass, putting runners on first and second with one down. Matt Kemp, looking to make magic happen on the first pitch, promptly grounded into the 6-4-3 double play, ending the game. Wait, we won? A one-run game? With only one hit (first time LA's lost when throwing a one-hitter in nearly 97 years)? 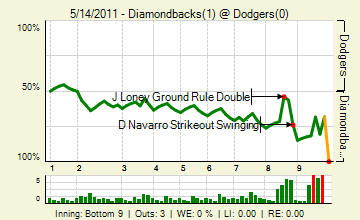 Comment of the Day/Night (Twilight?) goes to hotclaws, who posted the following after the third dinner roll call:

We're out of the cellar once more, and tomorrow's rubber match features IPK facing off against Ted Lilly (I assume the .gif will be posted shortly). Let's take a series from the Dodgers. That'd be sorta cool.