The Diamondbacks and the Draft: A Blast From the Past

Share All sharing options for: The Diamondbacks and the Draft: A Blast From the Past

I was really bored tonight so I started doing what any sane baseball fan does in the wake of restlessness, I made a baseball chart. What? You've never done that? Whatever, man. Anyway, with the upcoming draft rapidly nearing I figured I'd look into some of the successes and failures our brief franchise has encountered in the draft. Needless to say, the draft has been a huge crap shoot for the Diamondbacks. Not only has there been a meager four players surpass 10+ WAR in our 14-year draft history, none of them are with the team anymore and two of them never even appeared in a D-back uniform. More details after jump... 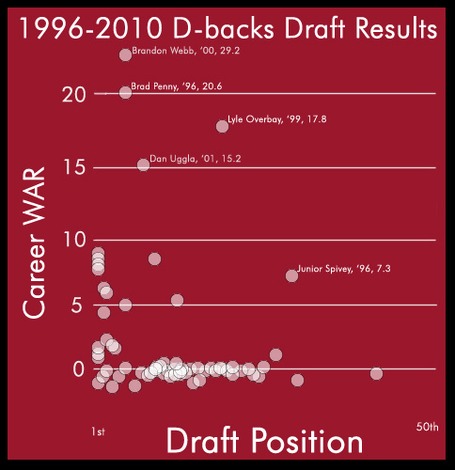 Since 1996, when the Diamondbacks selected Nick Bierbrodt as their first overall pick in the franchise's brief history, they have drafted 779 players. To date, only 67 of them signed and made it to the MLB with at least one appearance. All of those 67 players are plotted on the graph above. Additionally, the D-backs have had the privilege of a first-round pick 24 times, drafting gems such as Nick Bierbrodt, Corey Myers, Jason Bulger, Brooks Brown and others. Without a doubt, the D-backs simply haven't had the kind of success with the draft that fans would expect. Given the amount of hype that prospects are usually tagged with, be it fairly or not, only adds more fuel to the fire that is the difficulty of drafting potential superstars.

So let's start with 1996. For the normal fan there's only two true names that will stand out: Brad Penny and Junior Spivey. Penny was a budding young boy, 18-years-old, coming out of high school with a string of awards. The Diamondbacks pounced on him in the 5th round and Penny rewarded the organization by pounding away the lower levels of the minor leagues and quickly became the 5th rated best prospect in 1999. He was then traded to the Florida Marlins in exchange for a much needed closer at the time in Matt Mantei; as the story goes, Penny went on to produce a 20.6 WAR for four different teams and is still going strong today. Junior Spivey was drafted in the 36th round and came out of the gates a-blazing, posting a 4.5 WAR in his first full season in 2002 and even gathered enough votes to place 14th in the MVP race that year. Spivey then fell off the map and never posted a WAR above 1 before retiring in 2005.

Jack Cust was the first overall pick in 1997 and, like the other top WAR producers, was traded before he ever played any meaningful games with the D-backs. His 8.1 career WAR is hard to gauge given his prominent DH status in the AL. Additionally, there were only three other players who went on to the MLB from the 1997 draft. Two guys who not many people know of in Brian Gordon and Ron Calloway, and one who a lot of us will remember in Alex Cintron. Interestingly, the D-backs decided to keep Cintron and his entire 1.9 WAR that he provided in five years with the team...

The next big hitter didn't come until 1999 when we drafted Lyle Overbay in the 18th round. Lyle played 96 games with the Diamondbacks producing 1 WAR before being packaged in the megatrade that brought Richie Sexson to Arizona. Overbay has produced 16.8 WAR since then.

The following year the D-backs drafted Brandon Webb in the 8th round. Webb may never again pitch like he used to and isn't very well referred to these days by Arizona fans, but the fact remains that he gave D-backs fans a reason to watch in the horrible 2004 season and beyond. He won a Cy Young in 2006 and placed second in '07 and '08. Finally, the D-backs could pump their fist and brag about one of their draft picks. Unfortunately, his shoulder exploded in 2009 and he still hasn't found all of the pieces that went missing. He's long gone from Arizona, but he still remains as the best draft pick Arizona has ever had.

Dan Uggla was drafted in the 11th round in 2001 and played over 500 games with nearly 2,400 plate appearances in the minor leagues. He posted a slash line of .276/.347/.442 during that time but never made it to Triple-A. In December of 2005, the D-backs chose not to protect Uggla in the Rule 5 draft and the Florida Malrins scooped him up. The rest is history.

Since then, we've seen some new stars begin to rise to the occasion. Stephen Drew is sporting a 9.0 WAR and Justin Upton isn't far behind at 8.7 WAR. Those are definitely improvements that should help erase some blemishes off of what has been a seemingly endless amount of bad luck and poor choices. Speaking of poor choices, let's go back to those first-round picks that I mentioned earlier...

Kind of mind-shattering how poor our first-rounders have been. Overall, though, the D-backs just haven't had many success stories come from the draft. That could all change within the next few years as Justin Upton continues to play and guys like Jarrod Parker and A.J. Pollock sit in the wings. We'll have to wait and see.