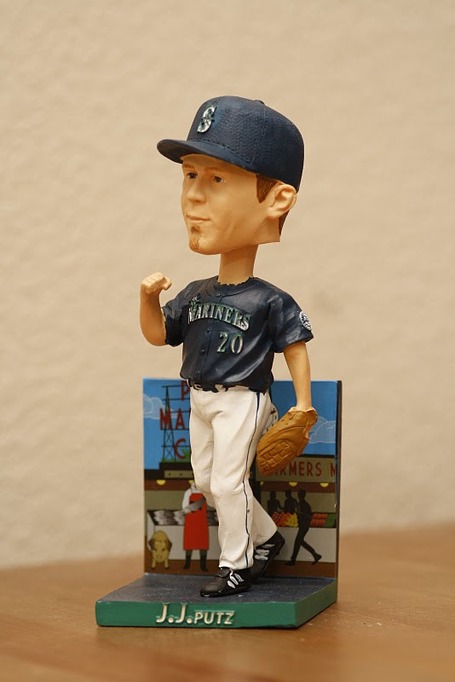 Record: 11-15. Pace: 69-93.
Change on last year: -1
With the four-game series tied at 1, a win today could put us in position to win a 4-game series, which is always a good thing. On the other hand, a loss today would not make this series a loss because of the extra game. Oh, the wonderful world of four-game series!

IPK is on the mound today, and we are well aware of the great performance he dialed up last time out. It would be unrealistic to expect a repeat, but I think this year's offense could conceivably take a quality start and turn it into a victory. Were the guys successful? Did Ian pitch a no-hitter? Did Alfonso Soriano spontaneously combust? Read on to find out!

Squaring off on the mound were the newly paternal Ian Kennedy and Matt Garza, he of the .400+ BABIP and allegedly no-hit stuff. Roberts’ hot hitting earned him a start at second base (which actually happens to be his most-played position in his career), with Mora at third. It is great that Gibson makes sure his best bats are in the lineup instead of paying homage to veterans. There are many people that would like to see Roberts as the undisputed starter at third, but it looks like someone out there needs see just a few more months of him hitting .350 to make the final call. Daron and Joe Sr. provided the entertainment, which got me thinking: barring geographical proximities, Grace only works about 4 of every 6 Diamondbacks games. At least we don’t have Matt Williams announcing any longer …

After Ian set the Cubs down in order in the first, CY and Parra looked silly striking out for the first two outs. Justin doubled off the wall in left and came around on a single by Drew, who moved to second on a single by hot-hitting Roberts but got stranded as Russell The Muscle popped out to center to end the inning. Stephen continues to lead all MLB shortstops in RBI despite missing time at the beginning of the year. Ian promptly dispatched the leadoff hitter in the second, but managed to give up yet another home run to Soriano on a pitch right down the heart of the plate. Alfonso is quickly travelling up the list of my most hated players, but he is quite far from the top spot comfortably occupied by Mat Latos. He set a career high in homers in April with 10, but to be fair, he had the benefit of playing 6 games against the Diamondbacks – that’s five home runs right there. A single by Byrd followed, but Ian finished off the inning without further damage. Miggy led off the bottom of the second with a marvelous bunt that rolled a total of 60 feet down the third base line, but that feat was negated by a Mora double play ball and a Kennedy lineout. The latter proceeded to have a quick inning with three groundouts. CY flied out to center to start the third – he looks to be reverting back to his not-so-glorious 2009 with an identical 0.36 GB-FB ratio (none of his other years had a ratio below 0.5). We can only hope that problem is addressed rather quickly, as the player with such great speed that bats in the leadoff spot should do everything possible to not hit the ball in the air. A groundout by Parra and a strikeout by Justin ended the inning with no damage done, the game tied at 1 after three innings.

Castro led off the fourth with a double, advanced to third on a flyout by Ramirez, and scored on a two-out single by Soriano. After an error by Mora put runners on first and second with two out, Ian pitched around Soto to load the bases and struck out Garza, a career .000 hitter, to end the threat. Diamondbacks could not maintain that little bit of momentum and went down in order in the bottom of the inning. Ian gave up a one-out single to Barney and struck out Castro, but was unable to get out of the inning intact as he gave up an RBI double to Ramirez. A lineout by Baker ended the inning, but at that point it seemed like Ian did not have "it" today the same way he had it in his last start. Some fine defensive positioning and a few Garza curveballs made the Diamondbacks look helpless for the second straight inning, while Ian finally got the ball in on Soriano and exploded his bat for a weak grounder to second. A fine play in the hole by Drew and a warning-track catch by Justin ended the sixth for the Cubs. CY walked to start the bottom of the inning and was promptly coached in by Matt Williams on a nice opposite-field RBI double by Parra, aided by some shoddy defense by Soriano. Justin reminded us of why he is not at all ready to fulfill all those expectations just yet by striking out on four pitches with a man at third and no outs, but Drew happily drove him in with a single over the drawn-in infield. A questionable call at second base gave the Cubs the second out, and Roberts flied out to end the inning with the game now tied at 3.

In the 7th, Ian gave a much-needed 1-2-3 inning with two strikeouts and a groundout. Garza kept pace with an easy inning of his own. After two quick outs in the eighth an error by Drew forced Ian out of the game when Gibby brought in Hernandez to get rid of Soriano. A strikeout followed, keeping the tie and securing a quality start and a no-decision for Kennedy. Kelly pinch-hit for Hernandez in the 8th and promptly struck out, continuing his spring struggles. Parra worked a 2-out walk ("you know those late walks …"), but Upton continued to demonstrate his complete inability to shorten up in key situations by majestically whiffing on a pitch that bounced off the plate. Putz was brought in to keep the game tied and gave up a single to Byrd to start off, and almost threw the ball away on a bunt but was saved by a great play by Stephen at second base. The play ended the day for Mike Quade, who came to argue the call – looks like Lou did a good job grooming his replacement. Putz then walked Colvin and got a perfect double play ball off the bat of Fukudome, but they were only able to get the out at second. That was costly, as Barney came through with a single up the middle to give the Cubs the lead, and Castro followed with a single to provide insurance. There is something to be said here about closers in non-save situations (or late-inning manager ejections), but we shouldn’t go there at this time. The Diamondbacks had a faint chance with tying run at the plate after a Roberts walk, but a Branyan flyout and a Miggy groundout ended our chances, to the delight of the many thousands of obnoxious snowbirds. 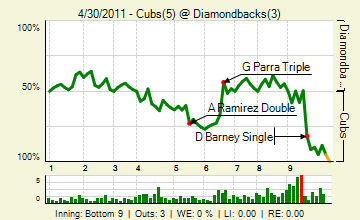 Frustrating game, but we have a chance to split tomorrow with our best pitcher on the mound. Can’t say I didn’t see this one coming though, as Garza’s advanced metrics suggest he is much better than his ERA and W-L record show. He once again proved his reputation of a strikeout master, whiffing ten Diamondbacks. The offense continues to sputter, making the outburst against Dempster look like a clear outlier in the sea of hitting futility; we did not have many opportunities today, only leaving 7 men on base. I am not convinced a day off was the right thing for Kelly, and Branyan is yet to contribute to our victory in a meaningful way. On the positive side, Drew continues to rake, and IPK still looks like a good steal. Seeing that the Yankees keep trotting out the likes of Freddy Garcia and Big Fat Bartolo Colon, they surely wish they could have that move back.

One thing that makes me (and many others, no doubt) happy is that tomorrow is the last time we will see the stupid Cubs this year. That alone is enough to atone for the bad loss we took today. Hudson on the mound against Casey Coleman – if I were a betting man, I would bet on Coleman pitching a 3-hit shutout. But again, we could score 7 runs in the first inning again and show how smart I am.

I would give the comment of the night to Jim with this gem:

In the current real estake market

It would probably be more economic for Fulton Homes to donate a Fulton Home for each HR.