Diamondbacks 6, Cubs 4: The Man With The Golden Glove

Share All sharing options for: Diamondbacks 6, Cubs 4: The Man With The Golden Glove

After a- let's be fair- surprising Opening Day victory in Denver, the Diamondbacks offense has been fairly quiet. Now, that's due to a combination of bad luck, bad timing, and just a lack of clutch, but while our pitching has been pretty decent so far, we just haven't been able to do much to support them. With the Diamondbacks sending out Armando Galarraga, our number 5 starter, to face off against Ryan Dempster, were we going to see another quiet day from our bats?

At the start, it looked like we might. A Melvin Mora single in the second inning was our only baserunner in the first two innings, but Galarraga was more than enough to match Dempster early on. Actually, I'm sorry- Galarraga and Chris Young were more than enough. No, sorry, let me try that again. Galarraga and Chris Young were more than enough. CY made his presence known in the first inning, making two great diving catches to rob Cubs hitters. If you didn't catch the game, go watch the plays on MLB, or you should see them on highlight reels later.

The third inning was when all the fun started, though it didn't begin easily for us. Gerardo Parra led off with a bloop single that he inexplicably tried to stretch into a double, where he was gunned down. However, Willie "Hey Remember When You Guys Didn't Want Me On Your Team" Bloomquist got a two out single which he, predictably, turned into a double by swiping second base. Chris Young came to the plate and, having realized he couldn't win this game on flashy catches alone, lined one to center that flew just past the outstretched glove of Marlon Byrd. Bloomquist came around to score easily. In the outfield, the Cubs bobbled the ball and then missed the cutoff man, all while CY kept his foot on the gas all the way around the bases, coming in to score easily for a 2-0 lead.

Galarraga kept sitting down Cubs batters, holding them hitless through the first three, though things had the chance to go haywire in the fourth inning. A leadoff single by Byrd was followed by a home run from Ramirez to tie the game, and it looked like the game might take a turn for the worse as the next batter, Tyler Colvin, send the first pitch deep to left-center. But Chris Young's defense stepped it up again, and he made his third highlight-reel-worthy catch of the game, crashing into the cold bricks of Wrigley to snag the ball for the out. After that, Galarraga only gave up three more hits through the next 4+ innings, and ended up with a respectable line- 7+ innings, 4 earned runs, five hits and only two walks allowed.

With the game tied again, the offense stepped it up in the top of the fifth. Doubles from Parra, CY, and Kelly Johnson, along with a single from Bloomquist, gave the team a solid 6-3 lead. The Cubs and Diamondbacks traded solo home runs in the bottom of the seventh and the top of the eighth, with Miguel Montero launching his second bomb of the season. Juan Gutierrez allowed an inherited runner to score in the eighth, dropped Galarraga's quality start bid, but another 1-2-3 inning from J.J. Putz locked down his second save of the season and made us all worry just a little bit less about his time in Spring Training. Armando took the win for his first in a Diamondbacks uniform. 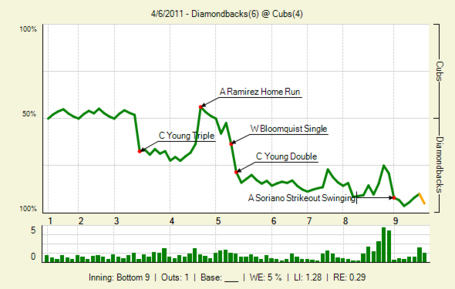 A nice outing for the Diamondbacks. After seeing a lot of hard-hit balls get caught for outs over the past few, it was nice to finally see some luck go our way. Galarraga gave us a good start, and deep into the game- I was surprised when he took the mound to start the eighth, though he only faced one batter. Our good bullpen made an appearance, and for once the clumsy defensive mistakes weren't made by our team. A nice way to leave Chicago and break our eight game losing streak against the Cubs.

Pretty good thread for a weekday afternoon game, ending just past 750 comments around the last out. Clefo, powered by some sugared-up mockery of a cookie (and waste of perfectly good grapes) led the post count, with snakecharmer in second and DBacksSkins and hotclaws tied for third. Also stopping by for the excitement were Jim McLennan, brian custer, venomfan, JustAJ, pygalgia, emilylovesthedbacks, jinnah, luckycc, blue bulldog, Turambar, jaydubsped, Shawnwck, Wimb, UAwildcats, PhoenixFly, IHateSouthBend, piratedan7, longshorts, Bryan J. Boltik, soco, Sprankton, SenSurround, Bcawz, and Cran Man. Comment of the day comes from early in the game when UAWildcats said Galarraga had luck on his side, and he was corrected:

So the Diamondbacks end the road trip with a 2-3 record, which is, to be honest, much better than a 1-4 trip. A travel day tomorrow brings our boys back to Arizona, where we'll face off with Travis Wood and the Cincinnati Reds for our home opener on Friday.