A messy 7th inning for both pitching squads made for an interesting game but the D-backs still managed to let this one slip away. Despite a quality start (though it's debatable) from Barry Enright, the team couldn't piece together enough offense at the right times to salvage a victory. Not only have we lost disappointing back-to-back games against the Cubs, but worse, we've lost eight consecutive against the blue Chicago team dating back to last season. Shivers.

On the bright side - we're really good at somehow causing the opposing starting pitcher to injure themselves.

The Cubs came out of the gate with their secret "we know everything about Barry Enright" strategy and absolutely lit the place up through the first three innings. Barry was hammered for seven hits and four runs and looked to have zero command on any of his pitches. Despite all of that, however, it was Miguel Montero who was responsible for kick starting the early afternoon troubles.

With only one out and runners on second and third in the bottom of the second inning Montero attempted a pick off at second base. Thing is, his throw didn't go to second base, it went to center field. A run scored thanks to the error and Montero's hopes of playing 140 games this year took another small hit. There's no way he'll end up playing that many games if he continues to make these types of errors in that sort of quantity. Enright followed up that disaster by allowing a walk to Fukodme and a double to Starlin Castro which drove in the second run of the inning. Thankfully, Fukodome got lost in translation and mistook a stop sign for a green light and was tagged out at home plate.

The D-backs quickly answered back in the top of the third inning when Ryan Roberts did his best Willie Boomquist impersonation with a leadoff home run. The rest of the frame went down in order but the game was still close at 2-1. Cue Tyler Colvin.

Colvin powered a fastball into the right field bleachers scoring Marlon Byrd. Enright allowed yet another hit following the home run but recovered with a juicy double play to end the third inning. It would be the last mistake Barry would make for the rest of the afternoon.

The game then scampered along remaining 4-1 while both pitchers settled back and did their jobs. Andrew Cashner was blowing away the D-backs lineup in his first Major League start, having held Arizona to two hits over 5 1/3 innings, but suddenly had to leave because of tightness in his right shoulder. We've seen three of the four opposing starting pitchers have to leave because of some sort of ailment to start the 2011 season. Weird, huh?

Meanwhile, like I said, Enright settled back and allowed only one walk after the first three dreadful innings. He finished the game with what is statistically called a "quality start" but left with an unimpressive line of 6 IP/ 7 hits/ 4 ER/ 3 BB/ and only 3 Ks totaling for a 1.67 WHIP and 6.00 ERA. That's not what I'd consider a quality start...

All sorts of things happened. Hopefully you didn't blink. The D-backs took advantage of Cashner leaving by jumping all over Samardzija, Mateo, and Russell but only mustered two runs. The potential to lay it the Cubs was there but we could only manage to tie the game. At the time, it seemed like it was something to get excited about, but then came the D-backs bullpen.

Sam Demel remains cursed by the BABIP gods and just couldn't get any kind of break. Then Joe Paterson came in for four pitches - all balls - with the bases loaded. Kind of surprised to see Gibson throw a rookie like Paterson into that kind of situation, but I suppose it was worth a test run. Guti finished off the inning by squeaking the last out from the relief pitcher/hitter Russell.

The D-backs made one last effort at a comeback in the ninth inning against the fill-in closer Sean Marshall. Miranda started the inning by making a relatively bad bunt look good by beating out the throw. Ryan Roberts followed with a fielder's choice and Melvin Mora placed runners on the corners with a pinch-hit single. Another pinch-hitter in Xavier Nady came to plate next. He lined one back at Marshall which ricocheted toward Starlin Castro who just barely threw him out at first. Roberts scored from third, but we were down to our last out. Willie Bloomquist tried but just didn't have enough veteranness to be the hero. End game: 6-5. 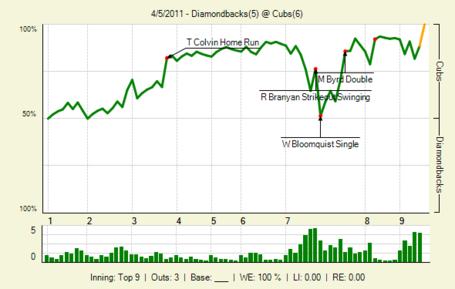 The baseball equivalent of [insert bad thing]: Sam Demel, -26.8%
A decent GDT for a matinee with nearly 700 comments among a crew of 30. Here's how it unfolded:

We can try out a new play called "getting a hit with runners in scoring position". I know it’s really exotic, but it could be worth a try.

I'm working my way to grumpy old curmudgeon status with all the grace I can muster.

This was in response to the D-backs recently going 1-20 with RISP
Tune in early for another afternoon game tomorrow as a surprising move has Armando Galarraga (0-0, -- ERA) pitted against Ryan Dempster (0-1, 8.10 ERA). Galarraga will continue to try and prove that he belongs in the rotation while Dempster tries to recover from a six run, six hit, four walk outing in his opening day start.