Well, the game started off okay, with Willie Bloomquist enjoying his first at-bat in Chicago for Arizona, depositing a pitch into the left-field stands. It's all the more impressive given that it wasn't apparently wind-assisted - if anything, it was into the wind at Wrigley, which was blowing LF-to-RF - and that Bloomquist has a career high of four homers. The freakish nature of the event did not, however, herald a subsequent offensive outburst for the Diamondbacks, and it was downhill from there. If they had their chances, they couldn't get a clutch hit when they needed it, and Russell Branyan inexplicably failed to deliver the home-run Daron Sutton promised us. Sheesh.

Arizona's biggest wasted opportunity was likely in the eighth, when Justin Upton reached on an error, and Russell Branyan followed with a single. Chris Young effectively sac-bunted, advancing the runners with a squibber back to the mound, and Miguel Montero was then walked, loading them up for Ryan Roberts. He fouled off a couple of fastballs from Cubs legend Kerry Wood, then stared at strike three on the corner of the plate. Gerardo Parra flew harmlessly out to left-field and the chance to tie things up was wasted.

Not that the Cubs were much clutcher, going hitless with runners in scoring position through the first seven frames. Joe Saunders extended the streak of quality starts by Arizona pitchers, who have now gone 3-for-3 thus far in 2011. He certainly destroyed the mirage of suck generated by his spring training ERA (12.46, resulting from the 24 earned runs allowed in 17.1 innings of work). It wasn't particularly dominating, and he had his share of help, such as Carlos Pena striking out on a 'hovercraft' slider, but the end result was two runs in six innings, on five hits and three walks, with three strikeouts.

His only real mistake was a 73-mph curveball that only curved nicely into Alfonso Soriano's wheelhouse, and was promptly turned into a souvenir for the bleacher creatures. The other run was, frankly a bit unlucky from our point of view: the runner who scored initially reached on an infield single, the ball spinning back to the foul line from where Saunders couldn't get any kind of direction or power on the flip to first. The single, walk and sacrifice fly that followed, however, were all on Saunders, though he stopped further bleeding after having loaded the bases with no-one out.

The bullpen couldn't keep the game close, allowing their first run in their eighth inning of work. Kam Mickolio had another blink-and-you-miss it inning. Just as against the Rockies, he retired all three batters faced in the seventh, but positively dawdled over this time, taking a whole seven pitches - that's a total of 13 in his two innings of work. However, he was kept in for the eighth, and that didn't work as well, surrendering back-to-back doubles (which conceivably might both have left the park elsewhere, or under different wind conditions), to double the Cubs lead. After Joe Paterson got the second out, David Hernandez conceded an RBI single, to make it 4-1.

The Diamondbacks went 0-for-8 with runners in scoring position overall, stranding a total of eleven men. We had the same number of hits as the Cubs, and outwalked them 6-3, but the difference was that Bloomquist's long ball was our only one for extra-bases. Branyan may not have homered, but did have two hits and a walk, as did Miguel Montero, while Bloomquist walked in addition to the solo shot. Good to see Stephen Drew back on the field, pinch-hitting in the ninth [he drew a walk]. Bit of a mixed-bag on the basepaths: Kelly Johnson and Ryan Roberts succeeded, but Justin Upton was caught, and Montero was thrown out advancing on a ball in the dirt.

Wrigley looked half-empty today. The announced crowd was 26,292 - which I think I heard Daron say was the smallest crowd since 2002? Even that seems like an over-estimate, unless they were including the ten thousand seagulls that descended on the park in the later innings. I'm not sure how (the appropriately-named) Marlon Byrd managed to figure out which of the many things flying through the sky, was the game-ending fly-ball he needed to catch. If they ever make The Birds 3 [yes, there was a The Birds II, though you probably didn't notice, like everyone else], just set it in Chicago and bypass the need for CGI or trained avians. 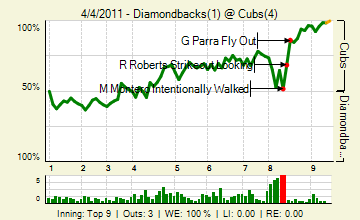 Hard to argue with that. Back for more of the same tomorrow, same (day)time, same channel, with Barry Enright taking the mound. SnakeSounds and SnakeBytes to follow later.