Armando Galarraga has been the beneficiary of plenty of run support. His ERA of 6, coming into tonight, doesn't really mesh with his 3-1 record. Last night Barry Enright was the beneficiary of nearly a dozens runs of support, would Galarraga's lucky streak continue tonight?

Arizona had another good first inning, scoring two runs off of Cubs starter Carlos Zambrano, but that's all they would get all night. Alfonso Soriano honed in on Galarraga's weakness - the home run ball - to lead the Cubs to a 4-2 victory.

Arizona has scored in the 1st inning 16 times so far this season. Nope, wait, make that 17 times. Chris Young worked a leadoff walk and Justin Upton hit a towering home run in Friday's Front Row Grill territory to put the Diamondbacks ahead 2-0. The home run landed at the 440 ft mark and was estimated by me at 453 feet, by Mark McClune at 454 feet, and by ESPN at 455 feet. We'll wait for the "official" home run distance from HitTrackerOnline tomorrow.

Zambrano, as we know, is pretty easy to rattle but settles down nicely, which, unfortunately, he did tonight. Russell Branyan, who came into tonight's game with poor numbers against Zambrano, doubled in the 2nd inning but was stranded at second base, two Diamondbacks walked in the 3rd inning but were stranded, and Melvin Mora turned an apparent hit-by-pitch into a single in the 4th inning and also stayed at first base. Zambrano had 62 pitches after the 3rd inning and 100 after six innings, and was eventually pulled for a pinch hitter in the 7th.

Galarraga was pitched very well and very efficiently through the first four innings. His six-pitch 1st inning was a blink-and-you'll-miss-it frame, and Galarraga stranded Cubs baserunners in the 2nd and 4th innings. In the top of the 5th inning, Galarraga's league-leading eight home runs allowed increased to 10 courtesy of solo shots by Soriano and Giovanni Soto. Just like that the game was tied, and those missed opportunities in the early innings were looming large.

Soriano hit another home run off of Galarraga, this time to the pool, in the 7th inning to put the Cubs ahead for good. Galarraga couldn't believe that one, Soriano just went after a pitch low and in and golfed it out. Then came The Dreaded Eighth Inning. That sounds like a horror movie. Oh wait, it is a horror movie, starring the one and only Esmerling Vasquez. Vasquez got himself in trouble with a leadoff triple by Darwin Barney and then hit Starlin Castro on the hand. Aramis Ramirez's slow grounder to the right side plated Barney to give the Cubs their final run total of four. It actually could have been worse than just the one run, because Vasquez allowed another single and there was a runner on third base before Vasquez finally learned not to throw Soriano low pitches and struck him out on a high fastball.

The Diamondbacks had a plenty of opportunities tonight, as many as 7 hits and 3 walks would allow. Young doubled in the 5th and moved to 3rd base on a sacrifice, but was stranded, and Upton and Melvin Mora had two singles in the 8th inning with nothing doing. A strikeout and two fly balls against Cubs closer Carlos Marmol ended a quiet night for Arizona. 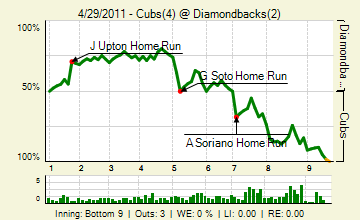 If you missed the numbers during the broadcast (thanks, shoewizard), here they are again: Galarraga, Enright and Joe Saunders have combined to give up 21 home runs in 85 innings pitched, or 2.2 home runs per "game" (9 IP). That's, y'know, NOT GOOD but I don't have the league average numbers at the tip of my fingers to use as a comparison. Jim referred us to his article a few weeks ago in which he points out that a rotation full of fly ball pitchers is bad. Jim, I think you wrote this article four months late and forgot to messenger it over to Kevin Towers...

Not a terribly active thread, barely over 400 posts, but it is a Friday night, so I guess some people have social lives and stuff. Bcawz led the way with 88 posts, justin in second place, and myself in third. All present were kishi, BattleMoses, justin1985, Torpedosneak, snakecharmer, blue bulldog, DbacksSkins, hotclaws, Bcawz, Rockkstarr12, blank_38, azshadowwalker, Jim McLennan, emilylovesthedbacks, Dallas D'Back Fan, SenSurround, 4 Corners Fan, CardsForTheWin, jonny-yuma, UAwildcats, and NASCARbernet. kishi scored Comment of the Thread with his only comment tonight, with his response to the Cubs' $3 beer plan:

I can only imagine

Some Cubs exec caught coverage of the Disco Demolition night debacle and thought, "You know what? Anything the White Sox can do, we can do bigger."

We're only half way through this series with the Cubs. So far, the Diamondbacks did really well in the first game, which Wailord did not attend, and pretty poorly in this one, which he did attend. So forgive me if I don't have high hopes for tomorrow, folks. ;)