Share All sharing options for: Diamondbacks 11, Cubs 2: Move Enright Along...

Record: 11-13. Pace: 74-88. Change on last season: +0
The Diamondbacks in the first inning today certainly DID move right along, sending twelve batters to the plate and scoring seven en route to a rout of Chicago and Barry Enright's first win of the season. It was a nice way to begin a three game series against the Engine That Drives Every Economy Everywhere Ever, the Cubs.

Delightful details after the jump.

Though Stephen Drew's fireworks will probably grab the headlines tonight, there wasn't any one great story to this game -- the offense did its part in scoring 7 in the 1st, despite "coasting" to "only" 4 runs the rest of the game; Barry Enright held the Cubs to 2 runs through nearly 7 innings, and Justin Upton and Gerardo Parra both made genuinely sparkling defensive plays to keep runs from scoring later in the inning.

Early in the game, jinnah suggested that I simply lay out a recap like this:

Barry pitched around a single by Starlin Castro in the top of the 1st to shut out the Cubs, and then the fun started. Ryan Dempster certainly wasn't on his game tonight and, in fact, by IP, this was his shortest game since he was a reliever, lasting all of one out and allowing every single 1st inning run scored. Chris Young led off the bottom with a double, and suddenly, Dempster couldn't find the strike zone with the help of a native guide. Kelly Johnson drew a walk, and after a LOUD foul ball into the cheap seats, Justin Upton was hit by a pitch, loading the bases for cleanup hitter Stephen Drew.

What happened next, according to Jim, hadn't happened in the Majors since September 2008, and in the NL since July 2007. With no outs, Stephen Drew took Dempster to the bank, depositing a fastball into the outfield seats for his first career Grand Slam. It turned out to be all the runs the team would need, and the team's win % stood at 85.5%, but just for good measure, after Miguel Montero grounded out, Melvin Mora, Russell Branyan and Gerardo Parra all walked to load the bases for Barry. Barry singled to bring in another run and reload the bases, and after another Chris Young hit, Justin Berg came in to clean up Dempster's mess. KJ and Upton made outs, but the damage was done. Not bad when you can rack up 95.9 WPA before your second out.

Barry had a 1-2-3 2nd, while Berg gave up a single to Droo and an RBI double to Miggy. Gerardo Parra notably drew his second walk of the game in the second inning (nevermind that it was intentional) so Berg could get to Enright, who... drew a 4 pitch walk of his own. CY grounded out to end the threat, but the score was 8-0.

Former Dback Koyie Hill homered to break up the shutout in the 3rd, but Barry got a timely double play from Castro to get around a Kosuke Fukudome single. Upton suffered his second HBP of the game but was erased by Drew's fielder's choice, but Miggy took Berg deep to extend the margin to 9 runs.

Enright had a 1-2-3 4th, and the Dbacks threatened again in the bottom of the inning, as Branyan singled and Parra drew yet his 3rd walk of the game. Hey, if batting 8th will teach him a little patience at the Major League level, who am I to argue? Barry showed bunt but swung instead, grounding into a double play, and CY ended the threat with a groundout.

Things got tricky in the 5th, when Barry made a triple decker sandwich of outs and walks but escaped without a run by the Cubs. Upton made a fantastic diving catch to end the inning and keep the Cubs from scoring. The Dbacks had a similar half inning, 3 straight outs spoiling 2 straight walks. Not much doing until the 7th, when the Cubs rode two singles and a Reed Johnson sac fly to another run. After a walk to Fukudome, Kirk Gibson gave the ball to Josh Collmenter to finish the game, with a walk and 3 strikeouts in 2.1 IP. Barry's final line read 6.2IP, 5H, 4BB, 4K, and a well-earned W.

In Arizona's half of the inning, CY lined another double and was driven home by Droo on a groundout. With his 5th RBI, our everyday SS set a single game career high. An Aramis Ramirez walk and a Branyan double were the only other baserunners before a Dbacks win that, according to FanGraphs, was more or less set in stone (99% win odds) at the 1st out of the 4th inning.

All told, Barry Enright was the only starter that didn't score a run, and he drove one in instead. Jim also noted that the 0.1 IP against the Dbacks tied a franchise record for an opposing starter's shortest stint -- it's not often that a starting pitcher has fewer innings than outings in one game. Drew went 2-5 with 3 runs scored, the Salami and 5 RBI, while CY went 3-5 with 2 runs each scored and driven in. If this game were Enright's audition to continue being a member of the big league rotation, he passed, though IHateSouthBend wasn't happy about the 1:1 K/BB ratio. On the day, the Cubs K'd 7x but drew 5 walks, while the numbers for Arizona's offense were 3 and 9 respectively, to go with 11 hits to Chicago's 5.

If this game were a movie, we'd have to nominate the entire ensemble cast for Best Supporting Actor. That having been said, here's FanGraphs with the envelope. And the winner is... 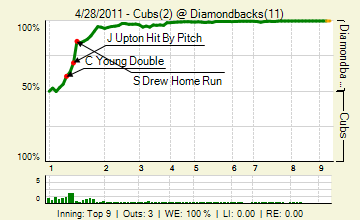 That's right! This is something I personally can't recall ever seeing before -- everyone on the team had a positive WPA. Even Josh C's 0-1 at bat (yeah, if you've got a reliever hitting, it's either a very good thing, as in Josh Collmenter, or a very bad thing, as in Justin Berg) was WP neutral, coming as it did at a time (bottom of the 8th) when the Dbacks were basically ensured a victory. Josh's 2.1 scoreless IP only added 0.1%. Chris Young was the second ranked hitter, at 8.6%, and Upton was the third, with 6.0%. Hey, FanGraphs doesn't care if you went 0-2 and got on via a walk and two plunks...

In the Gameday thread, we had another largely-ensemble performance. While I was the only poster in triple digits, and Clefo and kishi were the only two over 74, (both were in the 90s) we somehow made it to 907 comments as of this writing. Besides we three kings, there were hotclaws, Bcawz, UAwildcats, NASCARbernet, jinnah, Jdub220, Dallas D'Back Fan, Jim, luckycc, emilylovesthedbacks, IHateSouthBend, Zavada's Moustache, piratedan7, asteroid, Prosopis, Sprankton, snakecharmer, SenSurround, xmet, Wailord, JustAJ, BattleMoses, BigPapaKishi, 4 Corners Fan, dbacks25, Torpedosneak, mrssoco, txzona, mohavegreen, DeDxDbacKxJroK, CardsForTheWin, blank_38, JoeCB1991, Xeifrank, and Turambar. An unidentified Snakepitter must have been with us in spirit, for he was shown on TV accessing the 'Pit from his phone while at the game, yet nobody 'fessed up to it. (Prosopis speculated that it might have been Mr. X from DBBP, and it DID kinda look like him)

Comment of the night goes to kishi, with 4 recs, for this little gem:

Did we forget to write up the unwritten rules of Phoenix baseball? Here goes:

That’s the important part for today.

Here's to another great all-around performance against the Cubs tomorrow.