Share All sharing options for: D-backs 4, Phillies 8: Tyler Skaggs for 2016 Cy Young! Death to All Chickens!

Aww, fine, I'll muster up the energy to write a legitimate introduction to this, in spite of the absolute crapitude of the game.  The D-backs came into today's contest with the hopes of doing the unthinkable: pulling off a sweep of the vaunted Philadelphia Phillies against three members - none of whom was named Joe Blanton - of their supposedly-legendary Opening Day rotation.  We managed to miss the most dreaded head of the baseball equivalent of a death-bringing hydra, Roy Halladay, but still needed to rough up Cole Hamels if we were going to walk away with our sweep.

Why was it absolutely necessary that we rough up Hamels?  Well, because Joe Saunders was on the mound for the D-backs and he was most assuredly going to get roughed up himself.  If you were to look simply at his peripherals on the game - a K:BB ratio of 8:1 and GO:FO of 4:2 - you'd say "aww, shucks, poor Joe Saunders got unlucky today."  If you were to actually watch the game and the pitches that were getting hit, you'd say "JOE SAUNDERS WHAT THE $@!*%( ARE YOU DOING YOU Q#*!(#)$&!^@ THAT WAS RIGHT OVER THE FREAKING MIDDLE OF THE PLATE!!!"  That's pretty much how today's game was.

Saunders started off his afternoon in grand fashion, surrendering three hits to the first three batters he faced - singles to Shane Victorino and Placido Polanco, then a double to Jimmy Rollins, who proved to be an incredible thorn in the D-backs' side today.  For those bold enough to go back and re-watch the carnage of this game again, pause Rollins' double just before he makes contact with the pitch, and look where it is... center of the plate, just a hair below the belt.  Frankly, Saunders is lucky that the pitch was a ground ball double down the line instead of winding up in the left field seats.

In the blink of an eye, runners were on second and third, nobody was out, and the Phils were already up 1-0.  After Ryan Howard (who had a very Ryan Howard-like game - 1-4, 1 HR, 2 K) struck out, Ben Francisco crushed a double on a pitch that, while low, caught too much of the middle of the plate.  3-0 Phillies.  There was a looming sense in the GDT that it was going to be that kind of game.  The second inning didn't help to assuage concerns, as Saunders coughed up a homer to Shane Victorino.  Blanco had set up down and away on the pitch, but it arrived -or would have arrived, had it not been demolished - about six inches above Blanco's glove, at Victorino's belt.

Saunders wouldn't be scathed again until the fifth inning, but when he was scathed again, it was probably on his worst pitch of the night.  He left an 87 mph fastball dead over the middle of the plate, exactly at the belt to Jimmy Rollins.  Unlike the first at-bat when Saunders was lucky to escape with a double, this swing from Rollins ended in a two-run blast about twenty rows back in left field.  The score was now 6-1, and after Saunders gave up a walk and a hit (to the opposing pitcher Hamels), his night was finally over.  Sam Demel came in, stranding both of the inherited runners, and Saunders' line ended at 5 2/3 innings, 10 hits, 6 runs (all earned), 8 K, 1 BB, 2 HR.  Looking forward to a Saunders-free 2012.

The Phillies struck again in the seventh, though it might be more accurate to say that Juan Gutierrez shot his team in the foot in the seventh.  The Phillies scored despite collecting just one hit, a single, in the inning.  Gutierrez hit a batter and walked two, bringing in the Phillies' seventh run of the game on one of the walks.  Gutierrez's ERA jumped up to 5.56 with the outing, as he continues to fail to inspire confidence as a reliable reliever.  J.J. Putz coughed a homer to Howard in the ninth, continuing the conspiracy of closers struggling in non-save situations.  What's that, he was a middle reliever just a year ago?  Don't bother me with your facts, there's a legitimate statistical trend at work here!

The D-backs struck for the first time in the bottom of the second, with a walk to Stephen Drew coming before an RBI double from Melvin Mora, one of two doubles for Mora on the day, a refreshing sign of progress for someone who has stumbled out of the gate.  Chris Young was the only other source of offense today for the D-backs, collecting a pair of homers and three RBI, as he continues to demonstrate the skill set that makes him a horrible choice for a lead-off hitter (opinions, I know).  Once his .206 BABIP begins to regress, it'll be interesting to see what kind of line and wOBA he can put up.  Amidst the terrible pitching found elsewhere from the staff, young Josh Collmenter continued to make his case for a larger role by being the only D-backs reliever to throw a full scoreless inning today, striking out one in the eighth.

Today's FanGraph actually sponsored (except not, it's just provided by) FanGraphs, and titles for the day brought to you by the best and worst of the computer/video game industry.  Wow, this one has a depressing shape: 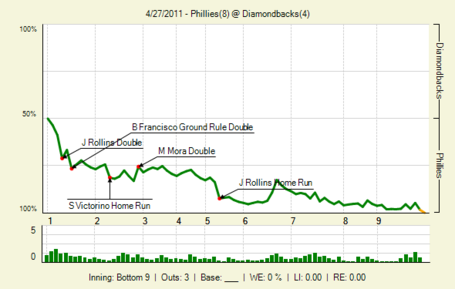 GDT was mildly busy today with 478 comments, but utterly depressed.  Comment of the day was a clear choice with seven recs, going to Sprankton for his referencing of The Oatmeal:

We begin a set against the ever-feeble Cubbies tomorrow at home with a 6:40 start, so hopefully we'll be able to move past our sucktastic performance today.  The starting pitching match-up is an interesting one, with Barry Enright and his 6.65 ERA going up against Ryan Dempster and his 7.71 ERA.  Both pitchers are currently sporting ERA's higher than their FIP's, which in turn are higher than their xFIP's, so we'll see if regression starts kicking in for either of them.