Share All sharing options for: Diamondbacks 7, Phillies 5: Roy, oh Roy! What a Win!

The series isn’t over yet, but when this thing started all anyone wanted to talk about was the rotation Philadelphia had bought.  How the Diamondbacks would even face the pheared Phillies was the question on everyone’s lips, especially since this is the same offense that was handcuffed by a sub-par Mets rotation.

It didn’t look good early.  Daniel Hudson was shaky at the start again, and he gave up a lead-off triple to Shane Victorino.  He was brought home with a Placido Polanco single, and the Phillies had a quick 1-0 lead.  Hudson would settle down, though, working around a Ryan Howard double to end the inning before more damage could be done.

Roy Oswalt seemed to be untouchable at first, easily dispatching the Diamondbacks in the bottom of the first with hardly any effort.  He would get more than he could handle in the next inning, though.  Miguel Montero earned the first D’back hit of the night with a single, and Juan Miranda walked to put two on for Gerardo Parra.  Parra singled, and Montero hustled all the way from second to score just ahead of the throw from Ben Francisco.  Hudson, likely fed up with the lack of run support he had been getting in prior starts, got a real beat on one and doubled to right, scoring both Miranda and Parra.  The Diamondbacks took a 3-1 lead into the third inning and never looked back.

The feared Phillies pitching?  Well, Oswalt was pulled after 3 innings for a pinch hitter, having given up 6 hits and 5 runs.

Things settled down until the sixth, when again the Phillies clawed at the lead.  Yet another three singles brought in 1 run for the road team.  The score wouldn’t remain there for long, though as Ryan Roberts hit a solo home run off the left field foulpole, right after Montero just missed a solo home run of his own.

Some aggressive baserunning in the seventh stretched the lead a little further for the D’backs.  Kelly Johnson hustled out an infield single after a Chris Young double play.  He then stole second, and took third on a wild pitch.  Justin Upton brought him home with a single, but he was promptly thrown out trying to steal second.

It wasn't all roses.  Twice the Diamondbacks' bullpen got itself into jams, but unlike 2010 it managed to dampen the damage and keep the win in line.  Three pitchers, Sam Demel, Joe Paterson, and Esmerling Vasquez all combined for a scoreless seventh.  How they did that is beyond me, considering they also sprinkled in three walks and still somehow kept it a clean sheet.

The Phillies threatened one finally time with a Ryan Howard single, and a Francisco home run to cut the tally to 7-5.  David Hernandez, the fifth Diamondbacks pitcher of the night, shut the door immediately afterwards, though, and the home team secured a series win against one of the favorites to win the NL.

Daniel Hudson finally got his first win of the season, and coincidentally the team actually scored some runs to help him out.  Of course, he had to get things going himself with that 2 run double, but grape snowcones all around. 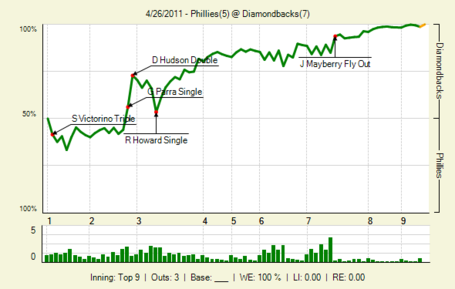 Something encouraging: only one strikeout, the lone victim being Miguel Montero.   Somewhere Kevin Towers is clutching a hairless cat, petting it absentmindedly as it mews pathetically.

Something not so encouraging: twice the Diamondbacks made outs on the base-paths.  It’s the consequence of aggression, and a reminder that unregulated aggression isn’t necessarily a gain.

Pitiful rec'in night, and I'm of one mind to not even award a COTD.  The comment with the most with 4 referred to Ryan Roberts, and his similarity to Spider-man: