Within 48 hours of being with his wife as she gave birth to their first child, Ian Kennedy produced a little gem of his own. He pitched the first complete-game shutout of his career, blanking the team with the best record in the majors on just three hits, striking out ten and walking none: only three Philadelphia players reached base against him all night. Meanwhile, the pitcher you might have expected to throw the shutout, Cliff Lee, took the L, despite striking out a dozen Diamondbacks.

This ranks among the most dominant performances by a Diamondbacks pitcher of all time. As measured by Game Score, it rates a 91, which makes it the best game ever by an Arizona starter not named Randy Johnson or Curt Schilling. Let's think about that. It was better than any Brandon Webb game. Better than any Dan Haren game. Better even than the Edwin Jackson no-hitter [which loses points for all those walks]. Here are the top ten performances, by Game Score, in franchise history, after tonight's marvelous showing by Kennedy.

It was the first complete-game shutout thrown by an Arizona player since Jackson's no-hitter. It was the first at Chase since Dan Haren blanked the Marlins in July 2009. Placido Polanco was the only Phillie to reach scoring position. He doubled with one out in the first, but Kennedy struck out the next two batters to end the threat. Polanco also got to trot down to second in the sixth, as the result of a Kennedy balk on a pick-off move. However, it seemed as if Kennedy got stronger as the game went on, because he then retired the final ten Phillies in order, to close out the victory.

Between them, Kennedy and Lee combined to strike out 22 batters. That's the most by a pair of starters in a Diamondbacks game since Jake Peavy (16) and Brandon Webb (6) reached the same total - you might remember that one, for the walk-off home-run Stephen Drew hit off Trevor Hoffman. Weirdly, that game took place four years ago, to the day. At four minutes over two hours, this evening's contest was the quickest game the Diamondbacks have been involved in since August 2008, when Brandon Webb beat the Pirates in a rapid 1:55. It helps when the teams leave just five on-base combined. And when the home-plate umpire is Bob Davidson: 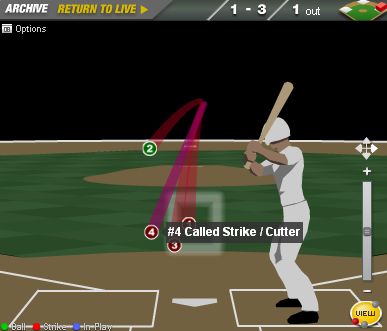 If you wanted an unbeatable argument for replacing the home-plate umpire with pitch f/X, the above should do. It's the third-inning appearance for Gerardo Parra, and the reason pitch #4 was called a strike is simply because Parra showed his obvious disagreement with the call for strike three. Umpire Bob Davidson - the one who tossed Kirk Gibson out for his argument on April 12th against the Cardinals - took exception to this, and in hindsight, it's now apparent that the next pitch was going to be strike three to Parra, even if Cliff Lee dropped the ball while on the mound.

That's wrong on just about every level. I can accept that different umpires interpret the strikezone in different ways. I find it very difficult to tolerate the idea that veteran players - be they hitters or pitchers - get a different strikezone than rookies. But the idea that any umpire would retaliate against a player by deliberately making a ridiculously-bad call on the next pitch is pathetic, pure and simple. Justice was served the next at-bat, when Parra homered on the first pitch he saw. You didn't need to be a telepath to read Parra's mind as he trotted over home-plate past Davidson, both parties carefully avoiding eye-contact.

That made the Diamondbacks' lead 3-0, following up on a two-run homer by Chris Young with two outs in the third. Yeah, good things may happen when you put the ball in play, but better things happen when you smack it out of the park. Tonight's performance shows that it is possible to win, even when you strike-out 13 times in 29 at-bats - 45% of the time - as the Diamondbacks did this evening. [The franchise record for a win is the Peavy game mentioned above, where we fanned 18 times in 29 at-bats, 62%] Of course, when your pitcher throws a shutout, that kinda aids your chances, right there.

Justin Upton was the only Diamondback to reach base safely more than once, with a double over the head of the center-fielder and a walk in the sixth. The latter came around to score after Upton swiped his fourth stolen-base of the year, and then Xavier Nady singled through the hole at short--stop. That completed the scoring for either team, and Arizona took the opener of the home-stand. One final nugget, passed on by GuruB: Kennedy’s child was born at 2:04 am…. the time of the game tonight 2:04. After four dispiriting losses in a row, I betcha didn't see this one coming, did you? I repeat my slogan previously offered: Your Arizona Diamondbacks - WTF? 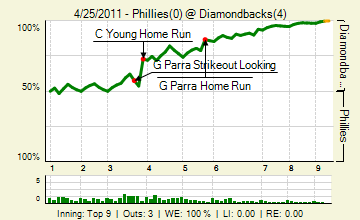 I don't think any of us were expecting much tonight, which might be why the GDT barely made 500 comments. Those who weren't here missed out on a great game: NASCARbernet, hotclaws, and Clefo all passed fifty, while also taking part were UAwildcats, kishi, Sprankton, Prosopis, asteroid, txzona, emilylovesthedbacks, Jim McLennan, Clefo, SenSurround, Zavada's Moustache, DbacksSkins, Jdub220, dbacks25, Scottyyy, Wimb, snakecharmer, soco, Wailord, BattleMoses, blank_38, Torpedosneak, JoeCB1991 and GuruB. A lot of green in the comments, with the most rec'd this worthy winner, courtesy of Clefo:

We'll see you again tomorrow, see if we can do it once more. SnakeSounds will follow shortly.