Diamondbacks 4, Mets 6: Well, at least it wasn't (completely) on the bullpen

Share All sharing options for: Diamondbacks 4, Mets 6: Well, at least it wasn't (completely) on the bullpen

Although some may look at today's rain delay as a nuisance (originally a 10:10MST start delayed until 11:30MST), it was all well and good for me. I mean, sure, there's the obvious benefit of enabling me to be awake on-time to watch the game I was supposed to recap, but more importantly, I was able to see the dog that threw out the first pitch. I mean, I know the organization was hit hard by the whole Madoff scandal, but that's gotta be an all-time low. Oh, wait, they had puppets sing the national anthem, too? Well, gee. Hit the jump to see how things unfolded today at Citi Field...

Actually, speaking of Gee, our lovable resident ginger Barry Enright took the hill against Dillon Gee of the Mets today, the latter of which making just his sixth career start. One would think that this would bode well for Arizona, but as-is often true, pitchers generally have the advantage if a hitter's never seen the arm before. You wouldn't really know it, though, as Arizona appeared to hit the ground running in the opening frame. After two quick outs -- that'll happen when your first two batters have OBPs of .259 and .275 -- Justin Upton blooped one into right, bringing Stephen Drew to the plate with a runner on. Drew laced one down the first base line, just past Ike Davis, and the cavernous Citi Field sent Upton home and Droo to third with his second triple of the season. He didn't any further than that, though, as Ike Davis robbed Miguel Montero of what would have probably been an extra-base hit to end the inning.

Unfortunately, Barry was hit and he was hit hard today, sorta from the get-go. Jose Reyes was given a free pass to first to start the first, and while two outs sandwiched a David Wright a single (including a nice, leaning-over-the-dugout-railing catch by Ryan Roberts), a big steal from Wright to take second allowed Jason Bay's single to score both runners and give New York a one-run lead. Ike Davis singled before the third out came, but Arizona escaped the inning down by one. The Mets continued to kill the ball in the third (again with two outs), when Jason Bay and Ike Davis went back-to-back, the second of which was truly a bomb, landing in Citi Field's right field upper-deck. Josh Thole came up and gave a ball a ride as well, landing for a double around the warning track. After a brief visit to the mound, Barry settled down and induced a grounder to end the inning, down 4-1.

The Diamondbacks went all "hey, us too" in the fourth, taking advantage of a walk to Stephen Drew and an "error" (official ruling) by second-baseman Daniel Murphy. Ryan Roberts continued on his torrid pace, singling one up the middle to cut the deficit to two. Juan Miranda continued his torrid pace (of sucking), but "RBI Machine" Gerardo Parra scored Miggy from second on a single to center. Up with two outs and two men in scoring position, Enright gave a ball a ride to center, but Citi Field sorta swallowed it up, killing any hopes of tying it up in the fourth. Regardless, when looking at the hit counts compared to the 4-3 score, calling Barry -- and, by extension, the team -- anything short of lucky would be a pretty big understatement.

The game seemed up-and-down through and through; in the top of the sixth, Miggy killed a ball to knot the game at four on a solo shot, yet the Mets continued to hit Enright in the bottom half, with a pinch-hit double and RBI single allowing New York to take the lead right back. That was the final nail in Barry's day, as he exited with a line of five innings pitched, five earned runs, and twelve hits, in line for the loss. Sam Demel came in and allowed a single to David Wright, but got a groundout from Beltran to keep the game 5-4. It was a mostly quiet game from there on, save a walk in the eighth from David Hernandez to put Jose Reyes in scoring position. Obviously, because it's how things worse, he scored shortly after on a single. Arizona tried to get something going in the ninth against Mets closer Francisco Rodriguez, as Parra found himself on second with only one out after a nice steal of second, but the offensive juggernaut Xavier Nady struck out and Chris Young followed suit to end the game 6-4. C'est la vie. 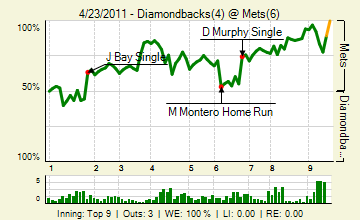 Comment of the Day goes to Jim, who posted the following in response to a question asking what everyone did for Earth Day (which was yesterday, for those of you that just hate the environment):

"While Mrs. SnakePit watched one of the most highly acclaimed films of the year, I sat through a badly made schlock fest with absolutely no redeeming value. And it was awesome."

The Dbacks look to avoid a sweep at the hands of the Mets tomorrow as Armando Galarraga taks the hill against Jon Niese. It'd be pretty cool if we didn't get swept by New York, but that's cool, guys. Whatever.