Share All sharing options for: Diamondbacks 1, Mets 4: Bullpen Fails to Pay Off

If somebody told you that you'd be watching a pitching duel in New York city, you probably would not have picked it to be between the Diamondbacks and Mets, let alone pick Joe Saunders and Mike Pelfrey to be the starting pitchers involved. However, that's indeed what played out in the Citi tonight. Saunders pitched 6 fabulous scoreless innings, and then it became a game of bullpens, and you know how well that usually turns out for Arizona. The bullpen struggled and gave up 4 runs in the 7th and 8th innings to send the Diamondbacks to a loss.

The game started out so promisingly for the Diamondbacks. Chris Young laced a triple to left center field to lead off the game. Mike Pelfrey then walked the .188-hitting Kelly Johnson, setting the table for the Dbacks' 3-4-5 hitters. But Justin Upton struck out, Drew fouled out to third base side, and Montero flied to left. Hello, 2010 Diamondbacks, how we have not missed thee. It was more of the same all night: Ryan Roberts walked to open the 2nd inning, but Pelfrey found a 95MPH fastball to strike out Russell Branyan, and Parra and Saunders popped out. Branyan got on base with a ground-rule double in the 4th but was also stranded.

The Diamondbacks finally pushed one run across in the 3rd inning. Young popped up between home plate and the pitcher's mound, four Mets tried to converge on the ball, and the guy who very audibly called for it, David Wright, dropped it and Young was safe at first base. After CY was caught stealing (on a huge jump and great throw from the catcher Mike Nickeas), Johnson doubled down the line. Upton then Texas-league-doubled, Johnson scored, and the Diamondbacks were up 1-0.

Joe Saunders was pitching well, and the Mets were struggling with leaving their own runners on base. Jose Reyes led off his team's 1st inning with a single, but was later picked off. In the 2nd inning, Jason Bay, fresh off the disabled list, doubled down the right field line and Mike Nickeas walked, but Saunders struck out Ike Davis and Jason Pridie on very nice curve balls. Saunders benefited from a few fabulous catches by Parra, and from the 3rd through 6th innings, Saunders faced the minimum.

But Saunders was throwing a lot of pitches and getting to a lot of 3-2 counts on the Mets hitters. He was close to 100 pitches by the time he batted for himself in the top of the 7th inning, a questionable decision by Gibson. When Saunders walked Wright to lead off the Mets' half of the frame, Gibson pulled him for Esmerling Vasquez. After two outs, ASU phenom Ike Davis hit a borderline home run off the center field wall, and the Mets went up 2-1. Saunders' potential win became a loss for Vasquez, and it only got worse in the dreaded 8th inning, which was pitched primarily by who else but Juan Gutierrez. It's really too tough for words, so instead, take the facts from the play-by-play:

Ryan Roberts walked in the 9th, but the Diamondbacks could do no more against "K-Rod" Francisco Rodriguez, and the game was over. 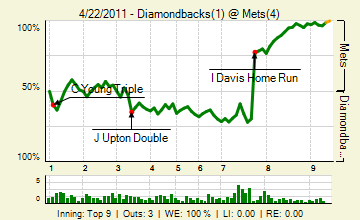 That WPA is a bit misleading, as Guti's runs are only unearned because of his own error. Vasquez pitched a full inning and only allowed 1 earned run and took the loss, whereas Guti allowed pitched 1/3 of an inning, allowed 2 runs, and doesn't even get a poor ERA.

Watching the Mets play defense is like watching Pablo Sandoval round second base - lots of epic falling, diving and missing, and poor reads. The Diamondbacks should've taken more advantage of the baserunners they did get, because they didn't get many. Pelfrey and Saunders both pitched pretty well tonight, better than probably either of their coaches had (honestly) expected. There were 23 fly-ball outs and 8 strikeouts between the two starters, Pelfrey just had the benefit of a better bullpen in Jason Isringhausen and Rodriguez.

It was a pretty active gameday thread until the late innings, with over 800 comments total. Some good discussion on the infield fly rule, some thoughts on Kirk Gibson's managerial decisions. DbacksSkins topped the century mark, I followed in 2nd, and blue bulldog took 3rd. Comment of the Day is Recapper's Discretion because it was funny and true:

Breakfast with Baseball tomorrow: 10:10am start! Barry Enright's smiling ginger head should wake us all up, as he goes against a AAA injury-replacement pitcher in Dillon Gee. See you in the breakfast roll call...