Diamondbacks 4, Reds 7: Leake and the Reds Steal One

Share All sharing options for: Diamondbacks 4, Reds 7: Leake and the Reds Steal One

Given the extracurricular activities of Cincinnati's young pitcher, Mike Leake, it wouldn't have been unusual to believe that the Diamondbacks could keep on its roll over the Reds and have its first season sweep. Unfortunately, Leake was ready to play, and so were the Reds' bats.

Cincinnati took the lead early and never looked back, taking advantage of a shaky Daniel Hudson start. He'll have to continue to wait for his first win of the season, which is unfortunate given that now we know how much he covets the stat.

Things looked good early for the Diamondbacks. Ryan Roberts continued to hit the Konami Code and led the game off with a double. Stephen Drew sent him home with a single, and the Diamondbacks had a 1-0 lead after only one half inning.

There was little time to celebrate, however, as the Reds would strike back immediately and take a lead they wouldn't surrender. Back-to-back singles by Brandon Phillips and Joey Votto set the table, and Hudson continued to find the strike zone difficult to established. He proceeded to walk both Jonny Gomes and Jay Bruce, which tied the game. Miguel Cairo singled in Votto and Gomes for a couple more runs.

Hudson still wasn't out of trouble, though, and his command still wasn't sharp. Ramon Hermandez was plunked to refill the bases, then Paul "Soft J" Janish walked to bring yet another run in. 4-1, with two of the runs scored by walks. Finally Mike Leake ended the torture by hitting into a double play.

The Diamondbacks weren't going to take it sitting down, though, and kept it close in the second inning. Juan Miranda singled, and then hustled his way to third on a Gerado Parra single. Daniel Hudson, in a bid to make up for his last inning, sacrificed Miranda home to cut the lead to 4-2.

Both young pitchers settled down for a while, and they traded 2 perfect innings. In the top of the 5th Kelly Johnson contributed to the cause by knocking a solo homer to right, inching the Diamondbacks a little closer, like a security guard edging up on a suspected thief.

Unfortunately it was about all over after that. Joey Votto answered with his own solo home run in the bottom of the fifth. The lead would be extended even further an inning later when Cairo, after getting a walk, was brought home with a Hernandez double, who was subsequently brought in with a Janish single. 7-3 after 6.

Drew would add a pity home run in the top of the 9th, but it wouldn't be enough. Still, Arizona leaves with a series victory, so there's plenty to be happy about as long as you ignore the 7 ER and 4 BB issued by Hudson today. 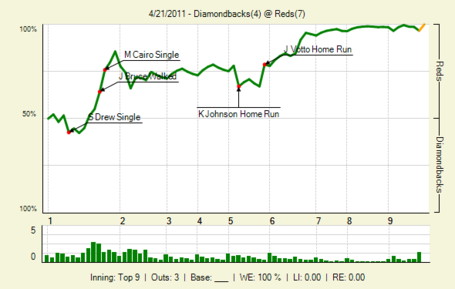 Comment of the Day goes to an early one by dbacks25:

leading the league in caught stealing.

Tomorrow the Diamondbacks continue their Great American Road Trip by heading into Queens, New York to play the Metropolitans. No word yet if the team plans to take in "Picasso and Marie-Thérèse: L’amour Fou," called by New York magazine "one of the most comprehensive and major exhibitions to date exploring the relationship between the notoriously gynecomaniacal artist and his fleshy young mistress and muse." First pitch tomorrow is at 4:10 Arizona time. See you there, maybe.