Diamondbacks 3, Reds 1: So that's what a shutdown bullpen looks like

The Diamondbacks came into the game today wondering if they could do something they haven't managed since September of last year- win three games in a row. To manage it, they'll have to manage some success against Bronson Arroyo, who held the team to one unearned run in six innings when they faced off in Chase Field, the only time the Reds have beaten the Diamondbacks so far this season. On a cloudy, chilly afternoon in Cincinnati, the Diamondbacks took the field, continuing that fight for .500

The game started on a good foot for the Diamondbacks- whatever Bronson Arroyo was throwing, the Diamondbacks were hitting hard in the first few innings. This paid off pretty well, with doubles from Willie Bloomquist and Kelly Johnson giving the team runners at first and second to start the inning. A sacrifice fly from Justin Upton gave Arizona a lead with the first out, but they couldn't manage any more. A double from Stephen Drew to start the second, a sac fly from Ryan Roberts, and a ground out by Ian Kennedy a 2-0 lead.

Meanwhile, the Reds were being baffled by IPK on the mound. After a leadoff walk to start the first, he started tearing his way through the lineup. It wasn't until the bottom of the fourth that the Reds had another baserunner, when Joey Votto managed a single, and IPK shut that down with a ground ball.

Unfortunately, Bronson Arroyo had figured out a way to be similarly effective. After the end of the second inning, the Diamondbacks bats shut down. Arroyo struck out the side swinging in the third inning, and then continued to cruise, while the Diamondbacks just flailed. From the third through the sixth, the DBacks displayed some impressive futility- eight strike outs, six of them swinging.

IPK gave us a bit of a scare in the fifth inning, when Jay Bruce lined a single off of Kennedy's leg. The game stopped for a bit while the trainers checked him out, but he stayed in the game. He struck out Jeremy Hermida looking, and though he gave up a single to Ryan Hanigan, he got Paul Janish and Arroyo to fly out to end the inning.

It was in the bottom of the sixth when IPK really hit some trouble, though. He gave up leadoff walk to Drew Stubbs, and then gave up some hard-hit balls to Brandon Phillips- for an out- and Joey Votto- for an RBI double, to cut the lead to 2-1. With a pitch count that had reached triple digits and what I can only imagine to be a massive bruise forming on his leg, Kennedy left the game with the tying run on base, and Gibby went to the 'pen and called in Juan Gutierrez. And we all held our breath. Fortunately, we got good Guti from the bullpen this time. He got a fly out from Scott Rolen and a swinging strike out from Bruce sent us back to the dugout, and left IPK with the shot at the W.

Fortunately, somewhere on the way back to the dugout, the Diamondbacks remembered how to hit. With one out in the seventh, Stephen Drew gave us our first hit of the game since the he led off the second. Ryan Roberts stepped to the plate and continued to beat up on the Reds, launching a shot to deep left-center. Hitting the ground just shy of the warning track, he made his way to second easily as Drew came in to score, bringing the lead 3-1.

After that, Arroyo's evening was over, and it was down to at battle of the bullpens. And they were both getting the job done. Aroldis Chapman didn't quite seem to have his renowned speed and walked two, but the Diamondbacks were held hitless. Meanwhile, Sam Demel and David Hernandez gave a scoreless inning each, with J.J. Putz coming in for the ninth to shut it down. I'd build up this scene for drama and suspense, but Putz wasn't in the mood for it- he shut down the Reds, 1-2-3, converting his fifth save of the season.

It's amazing what solid pitching can do when you have a few runs to back it up, isn't it? 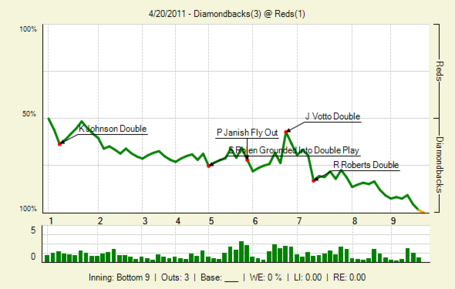 One more game against the Reds tomorrow morning- not on TV, so you'll have to smuggle your AM radio into work, or listen to it via MLB Gameday Audio. We've already won the season series against the NL Central champs, so we look to Daniel Hudson to give us a shot at the sweep and a fond farewell to Cincinnati.