Diamondbacks 1, Rockies 3: We now return to your regularly scheduled programming...

Share All sharing options for: Diamondbacks 1, Rockies 3: We now return to your regularly scheduled programming...

Just the second game of the season and our beloved Diamondbacks have already found a way to toy with our emotions, very nearly coming back in the final frame to take the game from Colorado. Daniel Hudson took the loss for the Diamondbacks, going six and allowing three earned runs, while the Rockies' Jorge De La Rosa  shut down the Diamondbacks through five and a third, allowing just three hits and a walk while striking out five. The bullpen continued its scoreless streak, pitching two more blank frames tonight, marking the seventh consecutive scoreless inning for the crew. Regardless, the Diamondbacks inability to take advantage of early opportunities evened up the record at .500.

Hit the jump for a more detailed account of the game - otherwise, you can pretend the game didn't happen, and we're still on pace for a perfect season.

The game started off well enough: our feared lead-off man Willie Bloomquist singled to start off the first inning and proceeded to steal second, setting up a man-on-second, no out situation; unfortunately, a Kelly Johnson strikeout, Justin Upton pop-up, and a Chris Young flyout erased any hopes of scoring in the opening frame. The Snakes stranded a man at second again in the second and clearly decided they’d had enough of it in the third: Bloomquist was, instead, stranded at third base.

Hudson looked at least a little bit shaky to start, missing some of his spots in the first inning and walking Colorado’s leadoff man Dexter Fowler. Fowler never made it home, though, as Hudson managed to get out of it unscathed, allowing just a single to Carlos Gonzalez before Troy Tulowitzki grounded into a double play to end the inning. Hudson breezed through the second, but Colorado managed to get on the board first on a Dexter Fowler RBI double (and the play at home would have been at least close, had Bloomquist not made Miggy move five feet from the plate). The damage stopped there, though, as Huddy half-intentionally-walked CarGo to get Tulo to ground out to kill the threat.

Arizona, of course, responded to this newfound deficit by ending their string of hits, going down in order in the fourth. At this point, it certainly seemed that De La Rosa was settling down, and it became an even bigger problem after the Rockies took advantage of two defensive errors by Miguel Montero in the next inning. After Ian Stewart came to the plate following a Jose Lopez single, Miggy let one get behind him, advancing Lopez over to second. Though Stewart struck out, Chris Ianetta doubled home Lopez and De La Rosa singled in Ianetta to increase the Colorado lead to three. Hudson stopped the bleeding there, striking out Dexter Fowler to end the inning.

Just two baserunners (and one hit) between the two teams during the six and seventh, and the only piece really worth mentioning is the first appearance for Kam Mickolio – whom we acquired in the Mark Reynolds trade – in a Diamondbacks uniform. He promptly shut down the Rockies in the seventh, striking out Chris Ianetta, then getting Ryan Spilborghs to pop out and coercing a roundball from Dexter Fowler. Not too shabby. Remember, David Hernandez, the other player nabbed by Arizona in the Reynolds trade, worked a scoreless frame yesterday, too, and this is surely not the last time you’ll hear how the two have done.

Joe Paterson made his Diamondbacks debut in the eighth as well, which did not go as swimmingly as Mickolio’s. After a defensive miscue by Parra allowed a would-be out from Seth Smith become a ground rule double, CarGo moved the runner over on a groundout and Paterson was yanked in favor of Sam Demel. Fulfilling his duty spectacularly, Demel pitched around Tulo (who, by the way, is 0/8 in 2011) and forced Todd Helton into a double play, ending the inning.

Things got interesting in the ninth, though, when Justin Upton led the inning off with a single and Chris Young walked in a nine-pitch at-bat, setting the stage for an RBI Ryan Roberts single, breaking up the shutout and making it a two-run ballgame. Montero flew out to deep center, bringing the pinch-hitting Russell Branyan to the plate. Like the Snakes before him, Russell the Muscle battled Street at the plate, then launched a flyball to just about the deepest part of the ballpark that found its way into Dexter Fowler's glove for out number two. The runners tagged, giving Parra a second-and-third, two-out situation for some late game heroics. Being Gerardo Parra, he decided to strike out instead, ending the game with the whole "stranded runner" motif for Arizona in full effect . 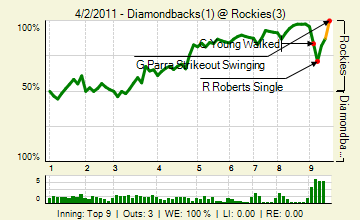 The undisputed Comment of the Night goes to DbacksSkins. Look, it doesn't even require context!

Tulowitzki
is one little 15 year old girl of fail.

The Diamondbacks send Joe Saunders (who,  remember, just knows how to win) to the hill to face off against Colorado's Jhoulys Chacin in tomorrow's rubber match. I wouldn't mind starting the season off with a series victory. Wouldn't mind at all...