Share All sharing options for: Diamondbacks 5, Reds 4: Night of the Long Drives

The Diamondbacks used the long-ball to get their road-trip off to a winning start in Cincinnati this evening. A season-high four home-runs, two by late addition to the line-up Ryan Roberts, accounted for all five men in Sedona Red to cross home-plate. After a wobbly beginning, Armando Galarraga settled down admirably, facing the minimum over his last three frames, and improved his record to 3-0, with his first quality start of the year.

And tonight's game proves that, yes, Arizona can win without Willie Bloomquist in the line-up.

It's funny how things work out sometime. Melvin Mora was originally scheduled to start at third-base, but a foot issue made his a game-time scratch, and Ryan Roberts took over. On the basis of tonight's showing, we may never see Mora again, since Roberts is now tied with Justin Upton and Chris Young for the team lead in homers, and has a line of .382/.462/.765. Quite what we're going to do with Geoff "two years!" Blum when he is ready to play again, I'm not sure - but Roberts has seized the opportunity afforded by Blum's injury, and basically made it impossible for him to be sent down.

Early on, it looked like Armando Galarraga was going to need to rely on his offense to bail him out again, as he allowed the Reds to come back, not once but twice. The extra-base knock continued to be his nemesis - he only gave up four hits all told, but they were each for extra bases, being a home-run and three doubles. Remarkably, of the 18 hits he has surrendered this year, 11 have been for extra bases: six HR and five doubles. However, he was throwing a lot of sliders, and struck out six people - four of the Cincinnati batters stared at strike three which, as Daron Sutton pointed out, is four more K's looking than he managed over his first two starts.

The Diamondbacks went ahead for the third time, on Ryan Roberts second home-run of the game - giving him his second multi-homer game. But the two-run shot in the fifth should have been more valuable, as the team ran into two outs on the base-paths prior to that. Juan Miranda led off with a double, but Galarraga bunted the ball too firmly back to the mound, and Miranda was out by about 20 feet at third [the D-backs maybe should have spent more time working on that in spring, rather than pick-offs - they are last in the NL for sacrifice bunts]. Then, when Kelly Johnson singled, Galarraga got halfway to third before deciding to go back and was caught in a rundown.

As Nick Piecoro Tweeted, "Things we just learned: 1. Armando Galarraga is not a great bunter. 2. Armando Galarraga is not a great base runner." Hey, that's what you get when you trade for an AL pitcher, who had thirteen plate-appearances in his professional career coming into this season - and he was signed in 2001. But if his off3nsiv3 skillz were a little short of l33t level, you couldn't have asked better of him over the final three frames. After it taking him 71 pitches for the first three, he got the final nine outs in only 31. He was rescued by a key double play in the fifth, with Joe Paterson likely warming to face Joey Votto, if there had been men on.

Arizona padded the lead with a homer in the top of the sixth, and after Galarraga departed, it was over to the bullpen for the final stretch. Esmerling Vasquez looked very impressive with a perfect seventh, and seems to have extended his pitching repertoire since last year. David Hernandez gave up his first run in the eighth, as a late lead-off walk came around to score. But it was unearned, thanks to Montero's league-leading fifth error [not just leading catchers, but all fielders [keep telling yourself: "He's hitting .380/.456/.620... He's hitting .380/.456/.620..."]. And after the tying run sat on first with no-one out, Hernandez schooled Joey Votto on three pitches and retired the next two batters.

Other stuff of interest, before we get to the final inning - consider it a dramatic pause for effect. Kelly Johnson got his second homer, and had another hit, but it tells you how bad he's been struggling, that's he's still only hitting .177/.250/.323. Justin Upton had an acrobatic dive in right, and may have gone deep after Roberts' homer, but on review by the umpires, it was called a triple - can't really argue with the call, as replays were inconclusive. Juan Miranda got himself a couple of very solid hits, getting his OPS up to .782, so we may hopefully see a bit more of him - and, therefore, less Xavier Nady - this series.

Back to the ninth. A one-run lead. Anyone else out there having flashbacks of 2010, as closer J.J. Putz went and plunked the first Reds batter, to put the tying run right back out there. A sacrifice bunt moved him over, but Putz got a ground-ball to Roberts for the second out, and closed proceedings with a strikeout. The victory gives the Diamondbacks their second winning streak of...er, two games, so we'll reconvene tomorrow to see if we can win on consecutive days for the first time this season, and extend the run to three. 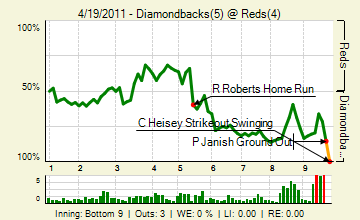 Just shy of 500 comments in the GDT, with Bcawz dominating in a Roberts-esque fashion, cracking three digits. snakecharmer and Rockkstarr12 kept things up for the laideez, to take second and third respectively. Also present, Jim McLennan, Clefo, xmet, hotclaws, BattleMoses, GuruB, Zavada's Moustache, kishi, emilylovesthedbacks, 4 Corners Fan, Jdub220, dbacks25, Dallas D'Back Fan, JustAJ, UAwildcats, Bryan J. Boltik, SenSurround, Baseballdad and IHateSouthBend. Comment of the night goes to hotclaws for what turned out to be a prophetic reply to, "I think Montero’s defense has gotten much better. Am I seeing things?"

"I like to keep a bottle of stimulant handy in case I see a snake, which I also keep handy."

While the victory was very nice 'n' all, I think those in the thread were probably more excited by the SnakePit Shout-out from Daron, who read a chunk from ZM's series preview on the air. I trust the check is in the mail... I was looking for some kind of helpful diagram on how to swear a blood oath, per Daron's request [he's trying to talk Mark Grace into making one], but Google Images seemed more intent on throwing up death metal album covers. So you'll have to work it out yourselves, guys. Sorry. :-)