In an absolutely shocking turn of events, we did not get to witness the highly-expected pitchers' duel between Barry Zito and Joe Saunders, two pitchers with ERA+ of 101 and 93 (respectively) since 2009. Zito fell victim to the whole injured-opposing-pitchers virus that seems to take hold of nearly every starter that goes up against Arizona. Ok, so maybe saying nearly every starter is a slight exaggeration, but it's certainly a fun little tidbit of information. Hit the jump to see how the game unfolded. If you need any incentive, we tie a franchise record within ...

Diamondbacks pitchers certainly have a knack for sucking in the early-going, whether it's Hudson in any of his three starts this year or Ian Kennedy the other night, and Joe Saunders was no exception tonight. Giants leadoff hitter quickly doubled to get the action started, and Giants young phenom Buster Posey sent a ball into the left-field seats three batters later to give the Giants a 2-0 cushion. Nothing doing in the second for San Francisco, but one note of interest was the 6-4-3 double play that ended the inning for Joe Saunders (you'll see why shortly).

As one might expect, two-run deficit for the best offense in baseball (by wOBA, at least) is but a scratch. Chris Young roped a ball to left with one down, reaching second with ease, and Xavier Nady got out, as it's all he knows in life walked to put pressure on Zito, pressure enough to force an errant pickoff throw to second, allowing both runners to advance. Miguel Montero, whose .444 batting average sat seventh in the lineup, crushed a double to right, knotting the game up at two. After Mora singled to left and Joe Saunders went all fail-bunt (popping up to the pitcher), all of the pressure apparently killed Zito's arm or something, allowing him to join the ranks of Ubaldo Jimenez, Jorge De La Rosa, and Andrew Cashner as opposing starters that've been - excuse the pun - snakebitten by Arizona this year. The game was halted to allow Zito to throw with the trianers on the mound, but he was ultimately taken out of the game in favor of Guillermo Mota.

The Giants were held scoreless once again in the third and fourth, with two more double plays helping to keep the game under control. Fast-forward to the fourth, and I guess it was "Dbacks that the Fans Hate" night or something, as Xavier Nady once again reached base in the fourth, getting doubled home by Melvin Mora (?!), putting Arizona up a run. Though, so as to not ruin the whole "...that the Fans Hate" part, he tried to stretch it into a triple and was subsequently thrown out by about a mile. See, that's how you end an inning in style, Melvin. Yet another double play occurred in the fifth when Pablo Sandoval grounded to short, bringing the tally up to four through five innings. Pretty crazy. Things looked ready to unravel in the sixth when Freddy Sanchez doubled home Aaron Rowand to knot the game at three a piece and Posey walked with only one down, but the good ole GIDP god saved us again, as Miguel Tejada grounded to short to end the inning. Pretty... crazier. Eliminating five runners on the basepaths is certainly one way to keep your opponent from scoring. It's also tied for the most in franchise history.

The baseball gods were not as kind in the seventh. Pat Burrell singled a ball off of Saunders' right foot, and the trainers had to come out to make sure he was alright. He was kept in the game after being evaluated and it looked like we'd get lucky once again, as pinch-running Darren Ford was caught stealing in a pickoff and He Who Eats Cake grounded out to first. Unfortunately, things don't really work as expected in baseball, and singles from Mark DeRosa and Brandon Belt allowed an Aaron Rowand walk to load the bases. Saunders got the hook at this point, and Sam Demel came in to get that last out to keep the game tied. Freddy Sanchez promptly singled to left, scoring both DeRosa and Belt, putting the Giants up 5-3. The eighth was mostly quiet, though it is worth mentioning that a) Juan Gutierrez didn't suck, getting a 1-2-3 inning, and b), Willie Bloomquist struck out to end his hitting streak at ten. Hernandez kept San Fran quiet in the ninth, but Brian Wilson did the same to the Snakes in the bottom half, with the final out coming on a Chris Young strikeout. 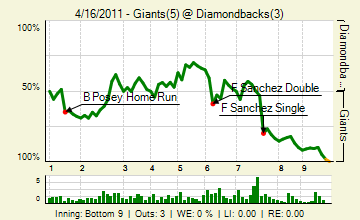 The GDT continued the pattern of the last few nights' past, as it garnered just under 300 comments. Clefo led the way with 59, BattleMoses took second with 42, and xmet came in third with 33. All involved were: soco, kishi, piratedan7, Bcawz,, asteroid, UAwildcats, Dallas D'Back Fan, Jim McLennan, NASCARbernet, shoewizard, azshadowwalker, snakecharmer, 4 Corners Fan, hotclaws, and Prosopis.
A severe lack of rec'd comments tonight, with multiple tying for Comment of the Night (rec-wise), so Dallas D'backs Fan wins because he responded to me in the process. Something something corruption. After I commented "hey, a strikeout", referring to a Saunders strikeout in the first:

And we're not even batting yet!

The Diamondbacks look to avoid being swept tomorrow as Barry Enright matches up against Madison Bumgarner with a 1:10MST pitch time. Please, guys, let's just not get owned by the Giants at home. Please?