The San Francisco Giants rolled into town today to find a hurting Diamondbacks team. Aaron Heilman was placed on the Disabled List earlier today, and the rest of the pitching staff was hit hard by the St. Louis Cardinals during the week. It did not get any better today against the reigning World Series champions. Daniel Hudson gave up a 3-run home run to Pablo Sandoval in the 1st inning, and that was all Matt Cain needed for his second victory of the year.

Arizona's Tale of Woe continues after the jump.

Hudson struggled again from the beginning of the game. He threw over 25 pitches in the 1st inning as Freddie Sanchez and Buster Posey singled ahead of Pablo Sandoval, who launched one high into right-center field. Hudson would end up striking out the side (5 Ks in two innings, 10 Ks in all tonight) but it was little consolation for the 3-0 hole the team was in. If you've seen Matt Cain pitch any time in the last 4 or 5 years, you'd know he doesn't need much of a cushion to get in a groove. In fact, San Francisco added to its lead with a run-scoring double by Miguel Tejada in the 4th. In the 5th, Hudson was about to get out of a jam with a strike-em-out (of Sandoval), throw-em-out (of Aubrey Huff) inning-ending double-play because Huff was going to be out by 10 feet, but Miguel Montero airmailed the throw over Melvin Mora's head at 3rd base, and Huff scored to give the Giants a 5-0 lead.

Arizona had baserunners in five of the six innings Cain pitched, but nothin' was doin' until the 7th inning. Stephen Drew led off the inning with a double and Mora was hit in the arm by a pitch. Cain, at over 100 pitches, was pulled for Jeremy Affeldt. Affeldt struck out Montero but walked pinch-hitter Xavier Nady, and Willie Bloomquist (proposed nickname: The Florist) hit a sacrifice fly to score Drew and prevent the shutout. Unfortunately, Kelly Johnson struck out with two runners in scoring position to end the threat.

Thanks to solid pitching from Sam Demel and two scoreless and quite boring innings out of newly recalled Esmerling Vasquez, the Diamondbacks were still in this thing come the 9th inning. The Giants sent Javier Lopez out to try to give closer Brian Wilson the night off, and he retired Drew nd Mora on groundouts fairly quickly. But after Montero walked and Ryan Roberts singled to make it a save situation, Wilson came in anyway. Willie "The Florist" Bloomquist singled to center to make it 5-2 and once again gave two baserunners to Kelly Johnson, but he harmlessly flew out to left, and the game was over. 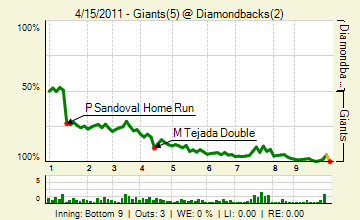 It was a very, very quiet gameday thread, the quietest one in quite some time. It's not even that the Diamondbacks did so poorly, but it was quite frankly a boring game. I didn't hear the attendance announced, but it seemed very sparse with a loud Giants contingency present. Here, we only had 22 users contribute to fewer than 300 comments. Clefo led the way with 57, rockstarr behind him in second, and txzona in third. All present were: Jim McLennan, Clefo, Zavada's Moustache, Sprankton, txzona, Rockkstarr12, Dallas D'Back Fan, UAwildcats, DeDxDbacKxJroK, snakecharmer, BattleMoses, hotclaws, pygalgia, Muu, longshorts, xmet, piratedan7, unnamedDBacksfan, JoeStock, dbacks25, NASCARbernet, and kishi.

I'm giving Jim Comment of the Thread for this gem which does need a little context. Go, read, enjoy. (It won't take you long... I'll wait....)

The only thing deader than this GDT is our offense.

Guess everyone is driving up to Flagstaff for the bubble-bath wrestling.

Tomorrow is the early evening start time of 5:10pm, Joe Saunders against Barry Zito, a lefty-lefty matchup. Saunders wants to forget his last outing, and Zito wants to build on his. It's likely only one of them will be successful... tune in tomorrow for the exciting showdown.