Share All sharing options for: 'Pit Your Wits: Week 2

Last Thursday the U.S.S. ‘Pit Your Wits embarked upon its maiden voyage (and for those of you that missed it, feel free to read up on it here for a more expanded explanation of the contest), and it certainly brought out the funnier side in a lot of the members here. Hit the jump to see last week's winners for the haiku/limerick contest, the current standings, and most importantly, next week's challenge.

Coming in third with 10 recs is DbacksSkins with his depressing haiku:

I wanted to write
A haiku about my team
But instead I cried.

Congrats, Skins. Have a medal.

Diamondhacks took second with his poignant reminder of years past, garnering 12 recs:

There once was a Johnson who hurled
in that era when banners unfurled
Ah! those were the days – kid
that’ve since been replaced, With
The Most Positive Team In The World

A well-deserved silver to you, sir.

Coming in first with 15 recs (pretty sure the most I've seen on a post in recent memory) is luckycc, who managed to include both Dan Haren and Melvin Mora in the same limerick... and still make it rhyme:

There once was a sports team from ArizonaTo survive the game, fans drank CoronaThey traded Dan HarenThe offense was barrenNow we’re stuck with that bum, Melvin Mora

Take your gold and display it proudly. Like, on your fridge. Or something.

Congrats to the winners and thanks to everyone for participating in Week 1's competition. I was pretty nervous before posting that we wouldn't get any participation and this contest would fall flat on its face, but you guys got rid of that uneasiness pretty quickly. Let's take a look at the standings, something that'll be included in each week's post. There's a chance that I'll run these in seasons, but I won't even considering implementing that as to not over-complicate things. Yet.

It'll be interesting to see how these standings shake out over the course of the next few weeks. Now, here's the challenge for the week of [today's date here]: 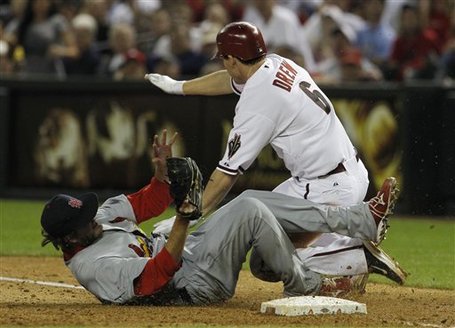 via the Associated Press

Remember, submissions are cut off Wednesday at 11:59PST, and the top three most-rec'd submissions (comments) will be the winners. You can submit as many as you'd like, but only your highest-scoring comment will count. Good luck to everyone, and see you next Thursday!