If you missed tonight’s game featuring the Diamondbacks square off against Chris Carpenter and the Cardinals, then slap yourself for missing one hell of a game.  Tape-measure home runs, bad pitching from surprising players, and fireworks between the home plate umpire and a manager all added up for a baseball game as imagined by Henry Miller.

The D’backs had the unfortunate luck of facing Chris Carpenter, who had not ever lost to Arizona in previous meetings.  The home team jumped on Carpenter early, though, scoring 2 runs; the first off a Stephen Drew double that brought Justin Upton home, and the second on a Chris Young single brought Drew around.  They would pile on Carpenter in the second frame, with Upton unleashing a monster three run bomb that went all the way to Fatburger.  He stopped to admire his handiwork, and no one could blame him except perhaps his hapless pitching opponent.

Arizona would extend its lead over Carpenter in the fifth inning with a Chris Young 2 run shot that went to deep left center.  St. Louis’ starter, so successful against the Diamondbacks in previous attempts, would leave after the inning in line for the loss.

The Cardinals hung around, though, picking away at an inconsistent Armando Galarraga.  The visitors would start the second inning off with back-to-back jacks from Lance Berkman, his third of the series, and David Freese to tie the game.  A collective sinking of stomachs across Arizona was palpable.  Colby Rasmus would cut the lead from 5-2 to 5-3 with a solo homer of his own in the top of the third.

Galarraga would ultimately ‘out-duel’ Carpenter in the atypical pitcher’s duel, but his victory was short lived.  In the top of the fifth, with a 8-3 lead, Armando found his way into trouble by giving up a double to Ryan Theriot and then a single to Albert Pujols.  Matt Holliday, still fresh off an appendectomy operation, would single in Theriot to cut Arizona’s lead to 8-4.  With two runners on and two outs, Galarraga had space to work with, but promptly threw it away by walking two straight batters to gift the Cards another run.  He would finally induce Molina into a fielder’s choice to end the threat, and keep the score at 8-5.

After getting Miguel Montero home on a Melvin Mora sacrifice fly, the Diamondbacks stood 9-5 as they stared into the abyss that was the sixth inning.  Kam Mickolio was brought in for relief, and lorded over a 26 minute half inning that left the fans still watching in pure agony.  Pujols and Holliday were subdued with strikeouts, but Mickolio walked two and gave up 3 singles on the way to helping the Cardinals cut the lead to 9-8.  Any hope of an easy victory seemed doubtful, even with tacos long secured.

Luckily the Diamondbacks struck back in the bottom of the sixth to the put the game away for good.  Russell Branyan, the owner of two long doubles, was brought home on a Ryan Roberts double.  He and Montero were on board for Juan Miranda, a man so derided as he walked to the plate that some were calling him the pinch GIDP.  He silenced the doubters for at least one night, though, with a three run homer that put the Diamondbacks up for good with 13-8 lead.

An unfortunate moment for the Cardinals near the end of the game featured Bryan Augenstein.  The reliever planted his left leg awkwardly on a pitch and had to be removed from the game with a groin injury.

Of course, the most eventual part of the game barely registers in the box score.  To kick things off, Montero was erroneously called for a called third strike on a check swing that certainly did not go around.  Montero let the home plate umpire, Bob Davidson, know his feelings on the subject, and the two exchanged words.  When Montero came up to bat again in the third, again he was called for a strike on a check swing.  And again, he did not actually go around.  One would think that making a call wrong once would cause a rational person to perhaps issue a makeup call later, but Bob Davidson is evidently not a rational man.

When Gibson said something from the dugout, Davidson immediately motioned for the manager to be ejected.  Gibson ran, gave a rigorous talk to Davidson, most likely calling into question various traits and inabilities of the blundering umpire.  He then refused to leave, yelling from the dugout, "I ain’t goin’."  Eventually he did leave, and the game proceeded without any further interruption by the erroneous overseer. 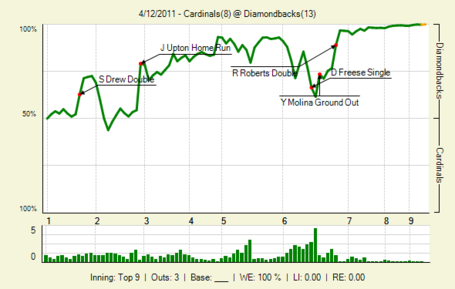 Comment of the day goes to Dallas D'backs Fan:

Tomorrow is the rubber match between the D'backs and Cards.  First pitch is at 6:40pm local time, and will not be on local TV.  So either get yourself an old fashioned radio, or head on down to the park.  I'm sure there will be plenty of seats to choose from.