Diamondbacks 2, Cardinals 8: Juan For The Road?

Share All sharing options for: Diamondbacks 2, Cardinals 8: Juan For The Road?

The Diamondbacks certainly had their changes this evening, getting seven hits and four walks through the first six frames, but only converted them to a single run. However, the Cardinals did a much better job of taking advantage of theirs, even as Albert Pujols went 0-for-4 with a double-play, before the gift of a late-inning at-bat against Juan Gutierrez. They were helped by their starting pitcher getting two hits and driving in two. On our end Barry Enright is proving nothing if not consistent, exactly matching his outing the first time round, by allowing four runs over six innings of work. Unfortunately, on this occasion, that was a few too many, and Arizona go back below .500 again.

We saw the negative side of "aggressive base-running" immediately. Willie Bloomquist extended his hitting stresk to eight games with a single, but was then immediately picked off first. Which is a shame, since Kelly Johnson followed up with a double, though was stranded there. That was pretty much the story of the game. We had runners on base every inning until the eighth, getting someone into scoring position in most of these. But we were 1-for-9 with RISP; that simply regresses us back towards league average, as we'd actually been over-achieving there, hitting .273 with an .833 OPS going into tonight.

However, it was the Cardinals who got on the board first, in the second - and it wasn't the usual route. Their #8 hitter singled, and the pitcher showed bunt at the first few pitches, before slapping it over the head of a surprised Chris Young in shallow center for an RBI double. Can't relieve blame Young for playing in, as St. Louis starter Kyle McClellan had exactly three hits in his entire professional career, since being drafted in 2002. Enright got out of the inning without further damage, and redeemed himself by accepting a four-pitch walk from his opposite number - the first in the majors for Bazza.

Despite this, things got unpleasant in the fourth, as it took Enright six attempts to get the final out. That included another RBI for the Cardinals pitcher, who scorched a liner through the right side, after an intentional walk to put men on first and second was followed by a wild pitch. However, Barry got Phat Albert to fly out harmlessly with the bases loaded, which at least kept the Diamondbacks within grand-slam range. Though we got one run back in the bottom half, unfortunately, Enright couldn't match McClellan - after a good at-bat, he ended up grounding into an inning-ending double-play with two on.

Much as in his first game, Enright wobbled rather than break, and continued the near-unbroken streak of Arizona starters going six or longer. His final line was nine hits, one walk and four strikeouts, with four K's. You really have to look at the second McClellan at-bat as the crucial one; if Enright had retired the pitcher there, he'd quite possibly have allowed only one run. He was efficient enough, taking 86 pitches to get through 29 batters - that's an average of less than three per hitter, but we needed runs. Russell Branyan hit for Enright with two out and two on in the sixth, and grounded out to first.

The bullpen was a mixed bag. Sam Demel gave up one run over two innings, on a solo homer - bad pitch selection with two strikes. Joe Paterson chewed up and spat out Colby Rasmus, making him look like a Little Leaguer on strike three well out of the zone, but Juan Gutierrez was horrid. He allowed three runs, including two homers, and has already been tagged this season for a total of nine, six earned, in just 3.2 innings, thanks to nine hits and two walks. Small sample-size, I know, but it really seems like he has reverted to the man who got tattooed last April like Ryan Roberts on a drunken bender.

Willie Bloomquist kept his hitting streak going with that first inning single, while Justin Upton reached three times on two hits and a walk: Melvin Mora had two hits, while Juan Miranda got a single and a walk. We had a decent K:BB ratio of 4:4, until the side was struck out in the ninth, including Kelly Johnson's third K of the evening. Blargh. This felt like a game we had a good chance of winning, but we find ourselves instead on the receiving end of our biggest defeat to date. Encouragingly, we've only been outscored by one run, 46-47, but our team ERA is now up at 4.72, not all that much better than last year's figure of 5.16...

Attendance: 15,746. That's not quite an all-time low - we had a couple below that in August last year - but only nine games into the year... It could be a long, empty summer at Chase. 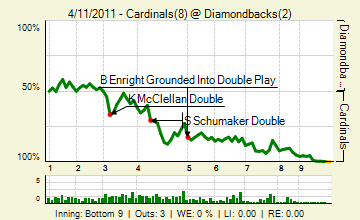 does not seem to match his twitter personality. His twitter says "I’m happy to be here, you guys!" His beard says "Flapjacks."