Well, whatever happens
Most memorable Opening Day game ever for the D-backs?
-- Jim McLennan

Sure. "Memorable." That's one word for it. Exciting, frustrating, and ulcer-inducing would be other good words and phrases for the game too. Opening Day with all its pomp and circumstance did not disappoint for Diamondbacks and Rockies fans. The Rockies took an early lead, but Arizona took a 4-3 lead in the 5th inning on a Justin Upton home run and Miguel Montero extended that to 6-3 in the 6th with a 2-run home run of his own, but a plethora of errors and miscues in the 7th allowed Colorado to tie the game. In extra innings, the Diamondbacks bullpen proved superior. (No, I'm not kidding.) Gerardo Parra scored the winning run on a wild pitch in the 11th inning, and J.J. Putz came in and saved the game with a perfect frame.

Plenty to talk about today, as the Diamondbacks are tied atop the NL West podium and are on pace to go 162-0!

Ian Kennedy was picked for his first Opening Day start and struggled early, and by early, I mean from the first batter of the inning for Colorado. Dexter Fowler walked on 6 straight fastballs, and you know what they say about leadoff walks. Something about them always coming around to score? Fowler advanced on a wild pitch and scored on a Seth Smith double. Seth Smith scored on a Todd Helton single, and the Rockies had a 2-0 lead after the first inning. This time last year, 2 runs would've been a lock for Ubaldo Jimenez to get the win, but he did not have his best stuff today. Back-to-back doubles by Miguel Montero and Gerardo Parra in the 2nd inning cut the Rockies lead to 2-1, but the Rockies got that run back in their half. After two innings, Ian Kennedy was at 53 pitches and 2 wild pitches, and it was looking like it might be a short day for IPK.

But Kennedy settled down over the next few innings and gave his team what they needed. He got a little help from a dubious "fan interference" call in the 5th inning. With a runner on second and Helton at the plate, Parra slid into the left field wall trying to make a catch. The 3rd base umpire Bill Welke saw some fans leaning out for the ball and called Helton out. From the TV camera's point of view, it didn't look like the ball landed close to Parra, but Kennedy took it and stranded Carlos Gonzalez at second base. Kennedy didn't strike out a man until the 4th inning, but he ended the 6th with back-to-back strikeouts of Ian Stewart and Dexter Fowler. Kennedy ended the afternoon with 6 innings, 4 runs (3 earned), 1 home run to Jose Lopez, and 3 strikeouts. After being on pace to reach 100 pitches by the 4th, he threw 110 through his 6 innings of work. A quality start for the Arizona youngster.

After Arizona's first run in the 2nd inning, they threatened again in the 4th, but new 3rd baseman Melvin Mora grounded into his first of two double plays. In the 5th inning, Jimenez walked the pitcher Kennedy and allowed a single to Willie Bloomquist, Justin Upton made him pay with a 3-run home run to deep left field. A lead! The first Diamondbacks lead of the 2011 season! A lead that Miguel Montero extended in the 6th inning with a 2-run shot to Coors Field State Park (aka right-center field). With Juan Gutierrez coming in to pitch the 7th inning, that lead of 6 to 4..........disappeared. But this time, it was not Gutierrez's fault. Guti struck out 3 batters and got 2 grounders in his one inning of work. Again, I'm not kidding.

Guti started off with a nice strikeout to Seth Smith, and then Carlos Gonzalez singled. After Parra "the RBI Preventing Machine" made a nice running catch of Troy Tulowitzki's line drive, there were 2 outs and one runner on base. A single up the middle by Helton put two runners on. Ty Wiggington struck out but Montero threw the ball into the dirt and Juan Miranda couldn't dig it out, and the lead was down to 1. Guti got a ground ball to Mora who also threw the ball past Miranda, and Helton came in to tie the game at 6 all. Gutierrez struck out catcher Chris Iannetta to end the 7th inning with his 5th out. The blown save may go on Gutierrez's record, but it really belongs to the entire Diamondbacks infield.

Heilman came in to pitch the 8th inning and looked great, although only the threat of the JupZooka kept Smith from scoring on a line drive. The Diamondbacks did very little against Huston Street in the 9th, David Hernandez showed his worth with a scoreless half inning, and we were on to extra innings. The Diamondbacks got another break from the umpires when a diving liner to right was called trapped, and Arizona had runners on 1st and 2nd with nobody out, but couldn't score. They broke through in the 11th. Parra had a leadoff single and went to 3rd on a single by Bloomquist, then scored on a wild pitch to the backstop by Matt Lindstrom, and the Diamondbacks had a 7-6 lead. Sam Demel pitched an easy 10th and J.J. Putz a clean 11th for the win and the save, respectably. 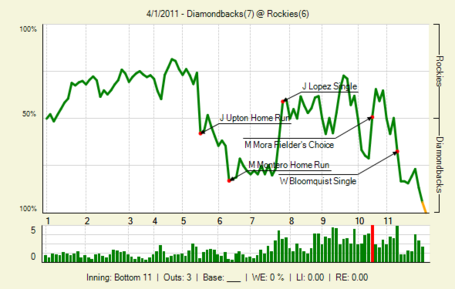 We were quite a chatty bunch today! Pre-game was a little slow, but we picked it up and needed an overflow thread by the 11th. 52 people combined for 2,154 comments in the two threads. I barely nudged kishi by two posts for 1st place, and justin was right behind in 3rd. Nine of us had three digits in comments, and we were mostly on topic! Pretty good for opening day!

I don’t understand this.

I’m watching the D’Backs game, and I,I, am ENJOYING THE GAME. What’s up with that?

For those of you new to the Snakepit - that's how we do things in the gameday threads! Happy to see the new faces, and please don't hesitate to jump in more often. See you back here tomorrow at 5pm!