...but doesn't succeed. A glorious day for baseball, and there was a full house at Salt River Fields for the last Saturday contest of spring training for the Diamondbacks. Present, in number, were a good selection of SnakePitters, taking part in the first (likely to be annual) SnakePicnicFest. A good time was had, opposing right fielders were heckled, and it's just unfortunate that the Arizona bullpen treated us to something we've seen rather too often in the last couple of years - a late-inning meltdown. Juan Gutierrez and Rafael Rodriguez were charged with six runs in 1.1 innings of work, turning a three-run lead into the final deficit, and leaving our record at 11-23.

Details and more pics after the jump

Ian Kennedy took the mound for Arizona, and much like Enright yesterday, hit rough water early on. He walked the lead-off hitter, and that man came around to score on a two-out homer. However, he settled down after that, and by the time he was lifted after walking the lead-off batter in the sixth [his only other walk], he had struck out an impressive nine batters through five innings. The final line was five hits and three runs, all earned. He professed himself ready: "Overall, I felt pretty good. "I feel pretty happy going into the season with my last two starts. My offspeed pitches are there. I didn't throw too many changeups today, but I feel like my curveball feels pretty good."

Esmerling  Vasquez threw two uber-perfect innings, facing one batter below the minimum six - he managed that by getting the inherited runner on first picked off. However, Juan Gutierrez gave up back-to-back homeruns to open the eighth, and Rafael Rodriguez, handed what was now a one-run lead in the ninth, was just horrible, giving up four hits, being charged with a total of four runs in four hits, as the runner he left on third then, came home on a successful two-out bunt single by Kansas City. Admittedly, that 'triple' could have gone as an error on center fielder A.J. Pollock, who basically whiffed it.

The offense did their part, getting a total of fifteen hits, six of them coming in a three-run first inning. We should have scored more, but for a base-running blunder, which saw Kelly Johnson and Justin Upton both heading for the same base at the same time - not sure what our third-base coach's involvement in that little fiasco was. Johnson and Melvin Mora ended up with three hits apiece - the former homered, for the third time this spring - while Russell Branyan and Henry Blanco had a couple of hits, and Upton reached twice, on a hit and a walk. Johnson and Upton each also stole a base - the latter's second success in eight spring attempts.

Overall, however, I wasn't impressed by the Diamondbacks' play. It seemed way too sloppy for a team in the final week of the pre-season, doing things like the base-running blunder mentioned above, or botching a rundown after they picked a runner off, and letting him dive back to first. Kennedy, once he settled down, seemed decent, and it was good to see Stephen Drew back in the line-up, albeit only for half a game. Kelly Johnson looked to be in decent form as well, and I generally tend to think that the offense will not be the biggest problem which Arizona will have this year. However, it still feels like a work in progress, and there will be bumps along the way. 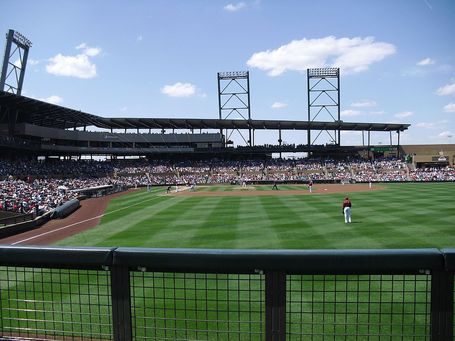 But you really want to hear about SnakePicnicFest, right? Well, we avoided the traffic problems which bedeviled operation on Opening Day - albeit, partly by arriving two and a half hours before first pitch and parking over at the mall next door - still had to pay $5 for that privilege[though on leaving the park, things did seem to be moving pretty smoothly, even if we snuck around the side, past Home Depot, to get to the highway. Local knowledge is a wonderful thing]. Breakfast was had at Denny's and we then headed to right-field, where the socos were already settling themselves in.

People arrived steadily from then until first pitch: those present included kishi, Turumbar, BattleMoses, 'Skins, jinnah and several members of Clan edbigghead. Sam Demel's father-in-law also popped by to say that he enjoys reading the 'Pit, so thanks to him for stopping by, as part of his week in Arizona. The main feature of the afternoon was yelling at whatever poor baseball player happened to be playing in front of us. The chief recipient was the Royals' Jeff Francoeur, who was perpetually harangued with queries like "Star Trek or Star Wars? Scratch your head if it's Star Trek!". Other topics addressed in his direction included NCAA basketball and the ongoing political situation in Libya. We are nothing if not broad-ranging in our inquiries.

To his credit, Francoeur bore this like a trooper, acknowledged our presence on several occasions, shaking his head at the more obscurist or surreal questions hurled his way, and lobbed us a ball [we gave it to a kid, naturally]. The highlight was when the SnakePit hordes, instead of replying to the organ with the traditional "Charge!", opted to yell "Frenchy!" instead. By the third time, Francoeur was laughing out loud; when this was followed by "Tip your hat if we're your favorite fans!",  he duly did so, to the roars of the assembled 'Pitters. I think it's safe to say that we now have a new #1 ballplayer with another team, and it's just a shame we won't see the Royals at Chase in 2011.

We tried our best to get a reaction out of Justin Upton, or the late-inning replacements in right, David Winfree and Lorenzo Cain, but they weren't willing to play with us. Sheesh. The other main leisure pursuit was staying hydrated: it was pretty hot in the sun, and the dispensers of sun-block at the top of the grass ran out by the seventh inning. Fortunately, there were plenty of vendors wandering about - that was especially good, since my attempt to visit a concession stand was abandoned after joining a lengthy queue which failed to move for five minutes. The final tally: four bottles of water, two lemonades and a Gelato were consumed by myself and Mrs. Snakepit.

It was a fun time, though it may be a while before my butt forgives me - grass may look soft, but by the time you've been sitting on it for approaching five hours, you are aware of everything beneath it, down to the earth's inner core. Next time, cushions will be brought. Mrs. S is lobbying for a tent, though I think they might balk at that. Thanks to everyone who turned up: few things are more fun than watching meaningless baseball with a bunch of friends, and the start of the regular season can't come soon enough.