How Important Is The Diamondbacks' Pitching Depth?

Share All sharing options for: How Important Is The Diamondbacks' Pitching Depth?

"I always say you need to go into each season with six or seven starters, just because there are going to be injuries and things are going to happen."
-- Kevin Towers

The news that the DIamondbacks have traded for Armando Galarraga spurred a lot of discussion last week, not least because it added another candidate to an apparently already full Arizona rotation. At the present time, it would appear that we have Joe Saunders, Ian Kennedy and Daniel Hudson as utter locks for rotation positions, with the remaining  spots going to, in rough order of probability: Zach Duke (likely), Galarraga, Barry Enright, Aaron Heilman and Micah Owings (unlikely).

But how important is a team's #6 starter? Let's crunch some numbers...

Firstly, the nominal five-man rotation very rarely happens over the course of a year. There are three basic reasons why a team will need more: injury, mid-season trades and ineffectiveness, and only one of these is truly under managerial control. In 2010, the most stable National League team were the Giants, who used seven starting pitchers; the least stable, the Nationals, tried twice as many, a staggering fourteen starters. The last NL team to use as few as five were the 1966 Dodgers - and they were on a four-man rotation. The Diamondbacks tried a dozen last year, with a combination of all the factors listed responsible for the need.

We had injuries to Kris Benson (and, nominally, Brandon Webb); Dan Haren and Edwin Jackson were traded away; and Dontrelle Willis + Billy Buckner sucked. As a result, our opening rotation [Haren, Jackson, Kennedy, Rodrigo Lopez and Benson] were responsible for 110 Diamondback starts in 2010. You could perhaps add on the 24 made by trade arrivals Saunders and Hudson, replacing Haren and Jackson respectively. But that still leaves the team's pitching depth, even discounting Webb, having to fill in for.28 games - almost an entire #6, if you like. Benson's injury led to a string of tried and failed candidates, before Enright provided stability for the last couple of months.

You might also be surprised how few true "full-time" starters there are too. Guess how many pitchers in the majors made over thirty starts last year? Only 68, including five who, like Haren and Jackson, made starts for two different teams. And that's actually sharply up on the 2009 figure, which was 56, with four mid-season tradees. Divide that across the thirty teams, and they're spread pretty thinly: if you've got more than two full-time starters for a season, you're ahead of the game.

Exceptional rotation stability was certainly one of the things that helped the Giants last season. They became the first National League team since the 1997 Braves to have four pitchers who each made 33 or more starts. Now that, in itself, doesn't guarantee success. But the last seven major-league franchises who did, all won their division that year: as well as the '10 Giants, they were the '08 White Sox, '04 Twins, '97, '93 and '91 Braves, and '90 Athletics. And I note, the only time the Diamondbacks have had more than two such starters was in 2007, when Doug Davis and Livan Hernandez joined Webb, and we got to the NL Championship Series.

To dig further into this, I looked at all 16 National League teams. The starting point was their Opening Day rotation, defined as the first five starters of the 2010 season for them. How many games did those five start over the course of the year? I adjusted the total from that for deals where one of these was traded, giving their original team "credit" for starts made after the deal (those are shown in italics). We can then see how many games had to be filled in from the team's pitching depth.

Yeah, the Nationals rotation pretty much imploded last season, didn't it? I do note there are some potential inconsistencies in these numbers, mostly as a result of using the first five starters as the de facto rotation for a team. Colorado's "true" rotation, for example, probably included Jeff Francis (19 starts) rather than Smith, but Francis opened the year on the DL. Conversely, the nominal Arizona rotation should have included Brandon Webb, who actually didn't appear at all in 2010. Life's too brief to get into all that, however...

It averages out at a very significant 38 games per team last year, from starters who were not in the Opening Day rotation. The long and the short of it is, it probably makes more sense not to think of, and plan for, your rotation as being five men each throwing 32-33 games, but as six pitching about 27 apiece. And even there, given the random nature of derailing events, those replacement games are unlikely to arrive at a steady pace, five days apart, consistently through the season. There will probably be times in a season when you don't need any, and other times when you will need multiple stand-ins.

Hence, Towers' estimate of a need for seven decent pitchers seems reasonable, providing the necessary depth to be more or less safe from issues. That's where the acquisition of back of the rotation starters comes in. As a scout said about one of our new arrivals: "You can’t say Galarraga’s going to be a guy who’s going to charge to the front of your rotation, but he’s going to limit the number of disasters you’ll have on the back end." These moves are about taking the 38 games in question, and giving us maybe a 40% chance of winning them, instead of 30% with a true "replacement level" player. It seems to me, this is a relatively cheap way to pick up four additional victories.

But what improvement in ERA do you need to get that extra 10%? To find out, I looked at all the games played in the NL last year, and calculated the win percentage for games when a team allowed X earned runs - effectively, where their ERA was roughly X [I limited it to games where the team pitched between eight and ten innings in total]. In other words, if you allow X earned runs, what are your chances of winning the game? For those glazing over and muttering that they were told there would be no math, there's a diagram as well, showing the same data. 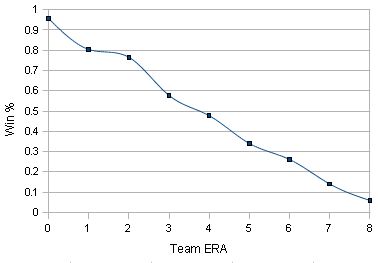 I was surprised how close to a straight line this is. Put another way, if you can allow a run less in a game, it doesn't make much difference whether you go from allowing seven to six, or from four to three. Both have about the same positive effect on win percentage, adding about 11%. That's significant, because the former is a lot easier and cheaper. A quick though experiment shows that. Let's say, you have a rotation of a typical #1, #2, #3, #4 and #5. If you dealt your #2 to another team, and wanted their #1, you'd probably have to throw in a lot more to balance the trade, than if you dealt your #5, and wanted a #4. But the effect, in terms of wins, would be similar.

This isn't really new. We looked at it back in 2008, when we tried to find out what the ERA was for a "typical" #1-5. The conclusion there: "A team will get just as much benefit - about three wins - by upgrading one slot in their rotation from a #5 pitcher to a #4 one, as by going from a #2 to a #1." But what are the typical results obtained by a replacement pitcher? Note, not a replacement-level pitcher, but one pulled in to a rotation after Opening Day. For each NL Team, I summed the starts not made by their Opening Day starters, or direct replacements as the result of a trade e.g. Hudson and Saunders, who replaced Jackson and Haren. [Spreadsheet with data]

Overall, that's 3,204 innings, with a 4.33 ERA, compared to a 4.05 ERA for all 2010 NL starters - about 7% worse than league average. There were some big disparities between teams: the obvious outlier are the Phillies, who were enormously helped by "replacement" starter Roy Oswalt. If we exclude him, the league average goes up to 4.40, about 9% above NL average. And if you look at the other teams significantly helped by replacements, it was the Giants, who largely held Bumgarner back to avoid Super Two status, and the Pirates, who were to starting what our bullpen was to relief (each had the worst ERA in the league, and by a very long way).

Most teams did take a hit from their replacements, though a 4.40 ERA isn't bad - it's probably better than I would have expected, and based on our previous study, it's a #4 starter. This probably reflects cases where, as noted, the Opening Day roster is not a team's optimum one, given the players available, for various reasons. Indeed, 2011 might be the case in Arizona: our "best" rotation for Opening Day might include Jarrod Parker, but it seems almost certain he'lll start the year off in the majors. Also, those who get taken out of a rotation during the year are more likely to be bad pitchers.

Obviously, this kind of thing is almost impossible to predict. How many starts will be needed from beyond the Opening Day rotation by the 2011 Diamondbacks? How will those replacements perform? Pitching depth is like insurance: if you don't need it, it's a waste of money. But nothing concentrates the mind like problems resulting from its absence, and I think that's what the Diamondbacks found out last year - our numbers were worse than league average, even with the pleasant surprise that was Barry Enright. I think the depth we have here is an improvement on 2010: how much value it will provide, remains to be seen.