Diamondbacks 7, Rockies 8: Salt In Our Wounds

Share All sharing options for: Diamondbacks 7, Rockies 8: Salt In Our Wounds

The first contest ever played at Salt River Fields was an enjoyable yet frustrating time - that applies both to the game itself and the experience overall. For the second day in a row, Arizona mounted a spirited comeback in the final inning after some ineffective middle-innings work: this was capped by a marvelous, game-tying three-run homer in the bottom of the ninth, off the bat of prospect Paul Goldschmidt. But it proved insufficient, as Colorado took the lead again with a solo shot in the tenth. For the second day in a row, the Diamondbacks lost by one run, once again leaving the tying run on third-base.

Details of the whole event after the jump. But here's Goldschmidt's homer, as I happened to be videoing what I expected to be the last out of the game...

So much, however, for getting to see the park before the game. It took 35 minutes to get across the entire city of Phoenix, from a little bit south of UofP Stadium, to the Indian bend exit on the 101, from where we could see the stadium. However, it then took forty minutes to get into the complex and find a place to park - it was just fortunate we left with plenty of time to spare. Access and parking are both utterly inadequate: being charged for "Center Field Parking", which eventually turned into a patch of dirt beside the 101, just added insult to injury. It was just fortunate 80% of the crowd had left before the end, so getting out was somewhat less rough. But it's a major deterrent to future visits.

Which is a shame, since once you're inside, it's a great venue. Even with a sell-out crowd, as it was this afternoon, it doesn't feel packed, and the lines to the concessions, etc. were largely short and quickly-moving. We enjoyed a slice of pizza from Upper Crust, and later on, I had a bratwurst - though the server couldn't get their brain around the concept of adding chilli and cheese, claiming those could only come with pepper and onions or they'd "get into trouble." Whatever, dude. Dessert? Oh, if you insist: we'll have the cheesecake on a stick. No, I'm not joking: you can see it below. About the only shortcoming was that it didn't come deep-fried: 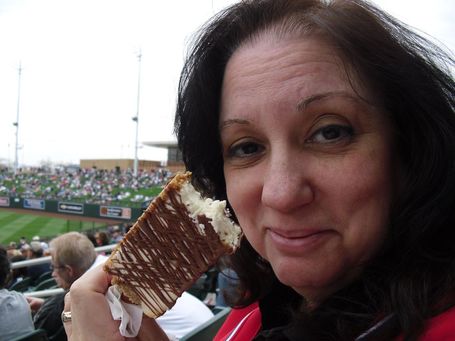 There was a bonus giveaway to attendees, in the form of a postcard-sized plaque marking the inaugural game, shaped like a ticket stub, which was an unexpected bonus, if somewhat unwieldy - thank heavens for the capacious pockets in my pants. There were the usual array of pre-game ceremonies, as Derrick Hall and a rep from the Rockies [sorry, wasn't paying attention, can't tell you who] threw out the ceremonial first pitch. They also showed a video tribute to late Colorado president, Keli McGregor; a trail forming part of the complex has been named after him, along which visitors can read inspiration quotes from the man.

Then, it was on to the game:

If you wanted to sum the game up, the first-string players played each other to a tie; the second-string Rockies took it to the second-string Diamondbacks; but our third-string guys handed it to their third-string guys. Heilman looked solid in his two innings of work, facing the minimum six batters, with the help of a double-play [one of four turned by Arizona on the day]. He was hardly taxed: if he threw more than about fifteen pitches in total, I'd be surprised. Still, he did nothing to harm his chances - which is a good deal more than can be said for most of the pitchers who followed in the next few innings.

Zach Duke allowed five hits in two innings, though only one run resulted from all that action. The final numbers would probably have been much worse, except for our left-handed starter getting the Rockies to hit into a pair of twin killings, while Duke also helped his own cause by picking a runner off first to end the third frame. Mike Hampton followed with a scoreless fifth, but gave up a couple of hits - our prospective LOOGY probably wasn't helped by having to face a string of right-handed batters. Juan Gutierrez fared worse still, allowing two runs in his frame, on a walk and a pair of doubles. 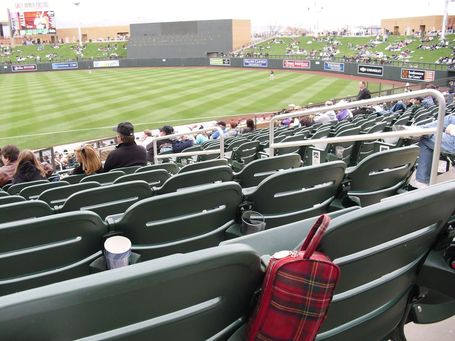 This is what a "sold-out game" looks like in spring training, by the middle of the tenth inning...

But it was the seventh where things fell apart, poor Micah Owings serving up BP to Colorado, retiring only one of six batters faced. Admittedly, he wasn't helped by John Hester wildly throwing the ball over third, trying for a force-play on a bunt attempt, but Owings allowed two doubles, a single and a walk on his own, being tagged with four runs and being replaced by Carlos Rosa. Many more outings like that, and Owings' slim chances of a bullpen spot will evaporate entirely. Jordan Norberto walked two, but he and Brian Sweeney pitched scoreless frames to allow for the comeback, before Daniel Stange took the loss, surrendering a one-out solo home-run in the tenth.

The lead-off spot was particularly productive for the Diamondbacks today, Kelly Johnson and A.J. Pollock combining for four hits there. Johnson put Arizona on top with one out in the third, sending a home-run the opposite way, that just stayed fair down the left-field line, and he reached safely all three times he came up this afternoon, on two hits and a nine-pitch walk. Pollock had a couple of hits after replacing Johnson in the order, while Ryan Roberts got on base three times, thanks to a hit and two walks; Goldschmidt added two knocks, and Brandon Allen got a hit and a walk - in total, Arizona matched Colorado's total, with sixteen hits. 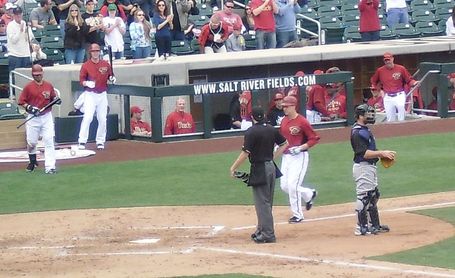 There seemed little chance of this being other than utterly forgettable when we reached the middle of the ninth, with the Rockies 7-2 up, and our lead=off batter made a tame out, to start off our last hope. Then Allen walked, Pollock singled, Marc Krauss singled in a run and Roberts walked. Suddenly, we had the tying run up, in the shape of Tony Abreu. He sac flied out, and it was Goldschmidt time: I told Mrs. SnakePit he was capable of going yard, and Paul made me look like a frickin' genius. Admittedly, it helped that he had apparently faced the pitcher at least six times in the minors and seen all his pitches. But it was still the most remarkable comeback I've ever attended.

Just a shame it couldn't be capped off with a victory. Not the best of performances from Arizona, particularly our pitchers: I know it's spring, but walking more batters than you K - 6-4 was the margin there today - is never a good thing. The defense was a bit of a mixed bag. Hester's gaffe was just horrible - he never set his feet at all, just threw it away. There was also a ball which clanked off Parra's glove in right; that was initially scored as an error, before being changed to a hit - I guess the Coors Field scorer must have been in town. And Wily Mo Pena triggered some disapproving muttering in the stands, after seeming to lollygag it on a hit to left that drove in the Rockies' first run.

On the other hand, some of the double-plays were slickly-turned, Juan Miranda looked good at first, and Chris Young had a fine day in the outfield, covering a lot of ground and also gunning down a runner at home-plate. You will also be glad to hear SnakePit tradition was maintained, by heckling Ryan Spilborghs every time he came to bat, though we sadly missed edbigghead's volume there. We did note, with approval, the presence in the outfield of complimentary sun-screen dispensers. Not that they were needed today - the weather was just about perfect, though it got chilly later - but worth remembering them for March 26th's SnakePicnicFest on the outfield lawn.

what a bunch of losers, but thank goodness for Todd Helton or no one would have showed up.

I'm not anticipating a GDT tomorrow, since I don't think the game is on TV, but after this afternoon's performance - I mean in the GDT, silly! - I am open to being convinced...