The Talking Schtick: KJ in the spotlight for Diamondbacks

Share All sharing options for: The Talking Schtick: KJ in the spotlight for Diamondbacks

What I want to know is, were any of the journalists present brave enough to raise their hands and go, "Who's Peter Crone?" Because even Wikipedia shrugs, and says "Did you mean: peter crane" [former Director of the Royal Botanic Gardens in London, in case you were wondering]. Krone, Krohn, Groan - I tried 'em all. Fortunately, Seth at SB Nation Arizona did some digging, and came up with this link. So now we know.

After the jump, Kelly Johnson talks about arbitration and moral victories, and Mexico comes to Chase. Not all of it.

Clay Zavada arrived at SRF@TS yesterday, and it's looking like his "retirement" may have been a bit of Chinese Whispers. His late arrival was due to him taking care of some personal business:  "It had nothing, really, to do with baseball. I was going through some things and I needed some time. I came in and I talked to Gibby and straightened everything out. I’m here now and ready to play:" He says his shoulder is feeling good, and he's looking forward to getting back on the mound. "I really just want to get back and kick some butt. That’s all that matters to me." That's the Zavada we know and love, certainly.

Kelly Johnson is now with the team too - not normally the most outspoken of team members, but Seth reports that the team's PR guys had him come into the interview room, rather than be interviewed by his locker. He spoke about coming to a pre-arbitration settlement with the team, and seemed glad to have done so. "I don't know anybody that's ever been to a hearing so you go off of hearsay on things like that, and nobody has too many good of things to say. Besides all that, it's no different than anybody else's deal free agency or whatever. It's one of those things that once it's announced, it's all good, but after that it's all about team." 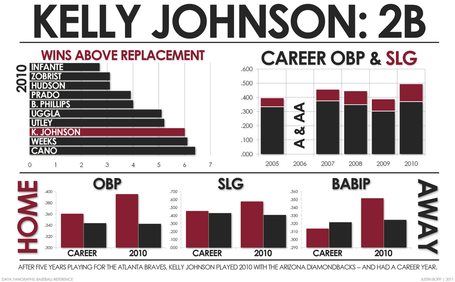 Beyond the Box Score wrote about KJ's splits, and suggested he might have
benefited from some luck at Chase last season.

While Cap'n Kirk may not have wanted to continue discussing last season, the same was apparently not true of Johnson, who had some interesting things to say regarding Arizona's 2010 campaign. Worth reporting Johnson's comments at length [courtesy of Seth]

"I'll be honest, I'm sick of the moral victory thing that we started doing at the end of the year. I think we started with a real good, positive note with spring training and going into the season...I think everyone was confident and positive. I thought  we had a really good momentum going into the season. It was unfortunate the way some games were lost but that's how it works. You still have a chance to go play May, June and July. April, May -- those months aren't going to decide your season.

"It's a shame we started making excuses early and we fell into the trap of moral victories. Well we lost, but the bullpen threw great today. Or, we got a great six innings from our starter but the offense didn't score any runs. We started looking for those positives but were losing.  "I think that's got to be done. It's got to be out the window. It's got to be more about, how are we going to win today. What is the Arizona Diamondbacks going to do today to win the baseball game."

Finally, the team announced this morning that they will close out Spring Training with exhibition games against the Monterrey Sultanes at 6:40 p.m. on March 29 and the Quintana Roo Tigres at 12:40 p.m. on March 30 at Chase. The games mark the second time Arizona has hosted Mexican League teams in exhibition games there, after defeating the Sultanes, 9-4, on March 29, 2008.The Sultanes last won the Mexican League Championship in 2007 and lost in the championship series in 2008. The Tigres were last crowned champions in 2005 and lost in the championship series in 2009.

Tickets for the exhibition games at Chase Field go on sale at 9 a.m. on March 5, along with individual game tickets for the regular season. Revenue from the two games benefit the Arizona Diamondbacks Foundation's "Diamonds Back" Field Building program, which will dedicate its 30th youth baseball field in Arizona since 2000 in a ceremony next month.