"I always notice you have a different attitude on the day of Fan Fest," muttered Mrs. SnakePit,, somewhat grumpily. Maybe it was something do with me dragging her, kicking and screaming, into the Arctic wastes of a harsh Arizona February morning, as we headed towards downtown Phoenix. Still, her tetchy demeanor was radically altered by the application of coffee and a Bacon Temptation omelet from IHOP. So, after a suitably nutritional soothing. we headed downtown to join the ten thousand or thereabout souls attending the seventh Diamondbacks Fan Fest at Chase...

Details, and more photos - many more - after the jump.

Getting there early definitely made sense, not least from a parking point of view - though since it was only five bucks for the Jefferson St. garage across from the ballpark, we didn't hesitate. There did seem to be some confusion about the opening times, and early admission. We handed over our Subway receipt and I got yellow wrist-banded, but Chris was told she didn't need one as she was with me. However, on reaching the gate, we discovered that was incorrect, and she had to go back and get tagged as well. On the plus side, they were already letting us in, a good 15 minutes before the official opening time for Subway munchers of 10 am. 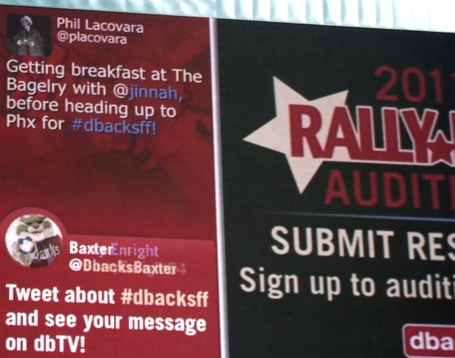 They showed Tweets from fans on the Jumbotron all day. Dunno who this sad geek is. :-)

We walked past the queue of people waiting to get their autograph tickets, and it was already being announced that multiple sessions had sold out - a full hour and a quarter before the doors opened to the general public. They, meanwhile, were queuing outside on what was left of the plaza. I say that, as a large section had been dug up, in preparation to install the solar-powered shade which will cover the space. That made things more than a little cramped outside, as I later found out, when I tried to go back to the car with an armful of purchases. 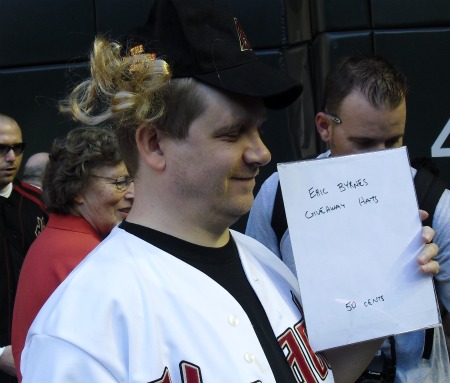 Oh, how the mighty are fallen. Byrnesmabilia, reduced to clear. Yes, that is "50 cents"

Fortunately, autographs aren't a priority for us anyway, so we sailed past that line and headed straight for the yard sale which, as always, was a treasure trove of unwanted stuff from team history. Ok, "treasure" might be pushing it for some items, such as the one shown above, but I did pick up an Augie Ojeda bobblehead for a buck. Trust me, I will have got my money's worth of "Actual Size" jokes out of it, by the end of tomorrow night. I also picked up a Tony Clark bat for thirty bucks - as you can see from the photo below, much like the man himself, it's big and black. I got quite some looks when I went to work after the Fest, swinging that over my shoulder.

I am now ready to deal with intruders, burglars, home invaders... Pretty much anybody, anytime...

Mrs. SnakePit also snagged some more crockery including espresso cups, soup bowls and less formal big soda buckets, which will become part of the furnishing of SnakePit Towers 2.0. I also picked up an armful of other stuff, which will be sent to deserving out of town/state/country D-backs fans at some point, whenever I can work out how to distribute them. Most of these - save the bat - were dumped back into the car, and Mrs. SnakePit then departed shortly thereafter, needing to show a house, and leaving me to my own devices. 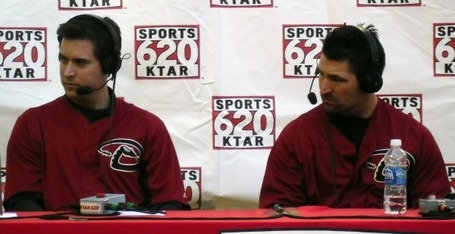 I listened to KTAR for a bit, as they were broadcasting from the park - nice to hear the dulcet tones of Greg Schulte again. I also went down into the clubhouse and did the annual mooch around there, gauging personality based on the contents of their locker. Miguel Montero appears to have moved into his locker, while Ian Kennedy appears to be the team Imelda Marcos, going by the sheer volume of shoes in his space. The 2001 World Series trophy had been taken out of its normal spot in the rotund, and was on display in the locker-room: Here's a picture. It will be of particular interest to Rockies and Padres fans, who probably won't have seen one before... 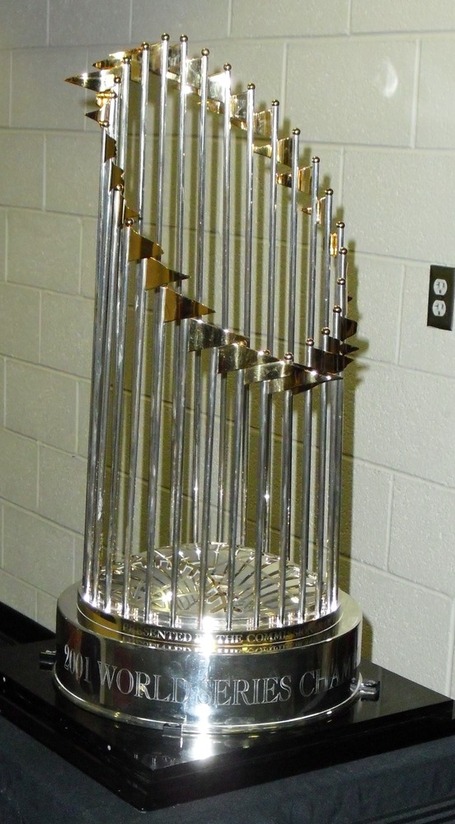 See that World Series? That's ours, that is...

The lines for the autograph sessions - both the paid for and the "free for under-12" ones - as well as the photo opportunities, were long but seemed to be cheerful enough, on both sets of participants' sides. I was happy enough just to meander, bumping into various people. Naturally, about the first person I saw was our ticket rep Mike - which seems to be the case every year! Among the too many to mention also spotted, and in no particular order: soco, BattleMoses, Seth from SB Nation Arizona, Turumbar and Reynolds rapper. I missed the 'Skins/jinnah troupe, as I had to depart, though they apparently spotted me.

"I didn't say Diamondbacks fans are cattle. What I said was, they should be treated like cattle..."

I would have been quite happy to sit in the sunshine all afternoon, but unfortunately, wage slavery demanded my presence, so I had to depart, before the event was barely half-over. However, it had served its purpose - and, no, that wasn't just the acquisition of more items, with which to clutter up SnakePit Towers. FanFest is the equivalent of Groundhog Day, potentially the end of winter - with the bonus that it never results in six weeks more. Pitchers and catchers report tomorrow, folks. How cool is that? 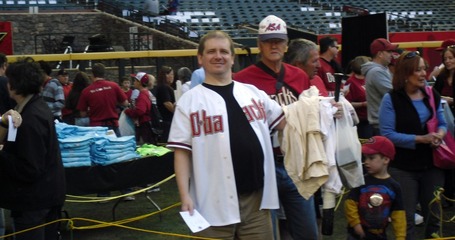 Do you have some kind of shopping cart? 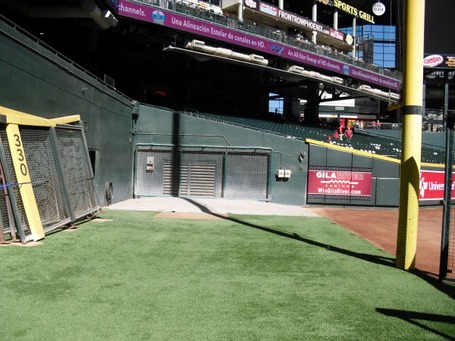 In the bullpen. I got a good one of the bullpen phone, which I'll be using once the season starts... 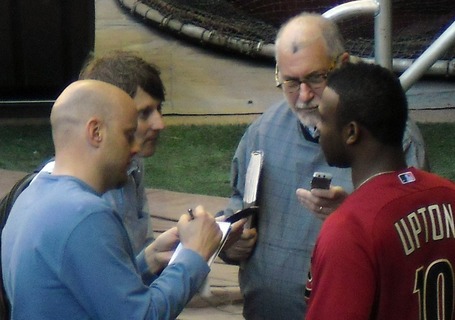 Messrs. Gilbert, Piecoro and Magruder get the inside scoop from Upton 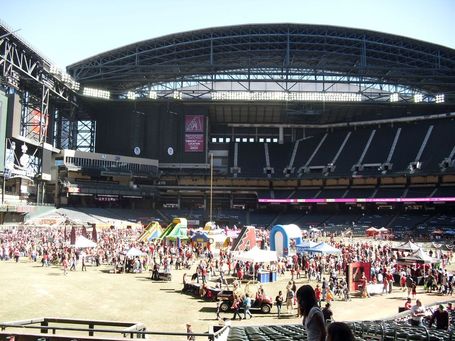