The upcoming weekend, means we can probably declare the long, dark winter officially over. Pitchers and catchers report on Sunday, but before that, Saturday sees another important marker on the road to Opening Day, with the 2011 Diamondbacks Subway FanFest. Always a great deal of fun, this is the seventh season the event has been held at Chase, and a crowd in excess of ten thousand is expected for the event again this year.

Details, and a suggested get-together, after the jump.

If you want to get a jump on the weekend, some of the Diamondbacks' players will be visiting Wild Horse Pass Hotel & Casino on Friday night. Joe Saunders, Sam Demel, Konrad Schmidt and Jarrod Parker for a meet and greet autograph session from 6pm to 7pm. Each attendee can have one item signed by each player, and free autographed player photos will also be available. It takes place in the Ocotillo Ballroom at the casino, which is located [for Google Mapping purposes] at 5040 Wild Horse Pass Blvd, Chandler, AZ 85226.

Moving on to Saturday itself, there's one rather under-advertised little secret attendees might want to know. You can get early admission and jump the line to buy autograph vouchers, in front of the masses, by visiting Subway and picking up two Value Meals. Hold on to the receipt, bring it to Gate A at Chase Field on Saturday, and you'll be admitted to the FanFest at 10 a.m, an hour before gates open to the general public. Having been part of the tidal wave of humanity which is the latter, we learned our lesson, and enjoyed dinner, courtesy of Subway, on Tuesday night. :-)

Once you get in, most people head either to pick up autograph tickets or the yard sale. Both will provide plenty of opportunity for queuing - though hopefully not at the level of a couple of years back, where to reach the end of the checkout line at the yard sale, you actually had to leave the yard sale. The queue is a good place to go over the schedule.and map, and work out what and when you want to see. Some information on the schedule can be found on the D-backs site [click on the "FanFest A-to-Z" link], but autograph session times, for instance, aren't yet known, so check the program for details of those. Here's a map showing the expected layout. 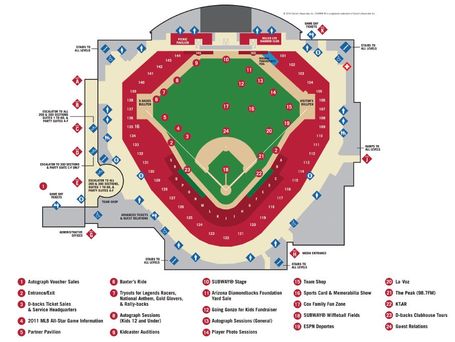 Some of the concession stands will be open, but don't expect a full selection. We'll be having breakfast before arrival to achieve the necessary level of caffeination - and also to avoid tiresome tramping up the stairs from the field to the concourse where the concession stands. It's longer than it looks, especially by the third or fourth time you've made the trip. Bear in mind that's also where the rest-rooms are, so we'd recommend making a stop on your way in, before heading down to the field where the bulk of the attractions are located.

There should be a bumper crop of players in attendance, since pitchers and catchers officially report tomorrow (some are already around), and that's at the new facility just across town at Salt River Fields, rather than a couple of hours down the I-10. And it'll be a new experience for many of them - from a quick scan of the list, about one-third of the players and the majority of the coaching staff scheduled to attend, were not with the franchise at this time last season. I trust they will be wearing name badges of some kind, because I'm not sure I could pick out Xavier Nady, say, from a line-up quite yet.

As already noted, we'll be in attendance, so if anyone wants to meet up, compare Yard Sale purchases, etc. we'll be well down for that. The plan is to take a breather around 12-12:30, and sit in the regular SnakePit fest section (136) down the left-field line, just above the Diamondbacks bullpen (and probably peering into it!). Please feel free to swing by and say hello. If you haven't met us before, Mrs. SnakePit and I will be easily recognizable, by our SnakePit D-backs jerseys, assuming we can find them - we have moved house since the last time we wore them...

Of course, there will be a full, illustrated report of the event on Saturday afternoon, so if we don't see you there, you can relive the event vicariously, through that. Photograph with Baxter not included.