Share All sharing options for: Duel of the Diamondbacks: '07 vs '98

Aaaand we're back! After quite a delay, the Duel of the Diamondbacks returns. Some technical issues capped off with an accident forced the delay. A couple surgeries and stitches later, I have a good amount of feeling back in my right three middle fingers. Let's just hope this is a quick Series...

To recap, the first two match-ups are over with, with one surprising result; the 2001 team was upset, knocking them out of the tournament. Here's the latest update: 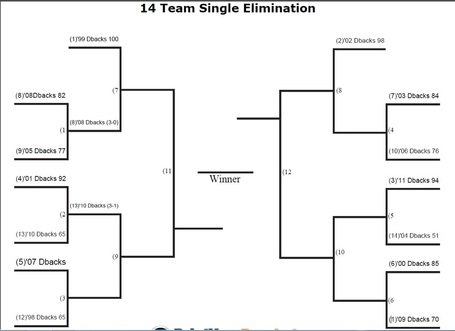 This Series, already at a 1-0 advantage to the Overdogs due to the first fan post I made. (I'll add the recap of the first game in begin this Series.)

Here are the lineups for both teams:

And the starting rotation for the 98 team:

The 1998 season was the Diamondbacks' inaugural season. They looked to contend in what was a strong NL West. They finished the season with a record of 65-97, 33GBs of the 98-win Padres. Although a lot of firsts were set this year, Buck and his men were largely out-classed. This would be a largely forgotten team, as just the next year, many new acquisitions would shadow or replace many of the '98 names.

The Arizona Diamondbacks' 2007 season resulted in a NL West crown, along with the best record in the National League. The Arizona Diamondbacks' most notable move in the offseason was when, on 1/9/07, they got their 2001 World Series co-MVP back, pitcher Randy Johnson after making a deal with the Yankees. However, Johnson suffered from injuries and underwent season-ending surgery in early August. Despite R.J.'s absence and the fact they have fewer runs scored (712) to runs allowed (732), the Diamondbacks were still able to win their first National League West title since '02 and finished with their first winning record since '03. They went to the NLDS against the a fierce Cubs team, where they swept them cleanly to move to the NLCS. An On-Fire Rockies team though, would cut the World Series dream short with a 4-game sweep.

Prediction: It seems to be that the '07 team has a scrappy offense and a solid bullpen. How well that will translate to this Sim will have to show itself. The '98 team is just out of it's league here (2007 Sweep)

'07 Dbacks strike early in the bottom half of the first off Benes. After Chris Young and Orlando Hudson go quietly, Eric Byrnes hits a grounder that Jay Bell can't get out of his glove quickly and the runner beats the throw. After Byrnes immediately swipes 2B, Conor Jackson cranks a double into the LCF gap scoring Byrnes easily from second. Stephen Drew follows that up with a single that (somehow) scores Jackson from first. Mark Reynolds continues the rally with a line drive to Left Center that moves Drew to third. With runners on the corners, Carlos Quentin gets hit in the knee by a pitch that loads the bases. Still with two outs, Chris Snyder grounds a ball that just beats Andy Fox to the leftside. Drew scores but Chip Hale holds Reynolds at third. Now batted all the way around to the pitcher, Webb grounds out harmlessly to 2B. 3-0

With a three run lead, Webb starts to lock up the Inaugural lineup. he faces the minimum till David Dellucci triples in the 3rd, but is able to work through the inning shutout intact. It wouldn't last long: In the 4th after retiring Kelly Stinnett, a single by Devon White, and a K by Matt Williams, the 98 team starts with it's own 2-out rally. Bell grounds it thru Hudson and Jackson to put runners on the corners. Brandon Webb, deciding a shutout would be boring, walks both Travis Lee and Garcia to score White from third. But thats all Webb would allow, as he gets Dellucci to ground into a 4-6 fielder's choice. In fact, thats all he would give the 98er's; working 8 innings allowing 6 hits and 4 walks, while K'ing 10 in 129 pitches. Interestingly, he doesn't get a clean inning the rest of the game, either allowing one hit and/or walk, but is able to come out unscathed.

The '07 team adds 2 in the 5th on Reynolds' double that scores Drew, and he touches home after Snyder's single to right. In the 8th, with Benes still laboring, Tony Clark delivers the knockout blow with a pinch-hit RBI single that scores Quentin. Benes final line: 7.1IP 12H 6ER 1BB and 4K's on 109 pitches. Besides a pinch-hit single from Tony Batista, Pena easily secures the W for the 2007 team.

(multiple changes to line-up, including not having the 98 catcher batting 2nd like whatifsports wants me to...)

Doug Davis' historical playoff outcome wasn't too shabby. October 4th he pitched 5.2IP and allowed 4ERs while striking out 8, which was enough for the win against the Cubs. His other playoff game was against the Rockies where he earned a no-decision after going 5 strong with only 5H and 1ER.

In this game, he showed the same composure, and even more DD-ability at one point retiring 10 in a row from the 3rd through the 6th, and more impressively shutting down 19 of 20 from the 3rd inning through to the 9th.

Brian Anderson had a different story. His first batter of the game, Chris Young, went deep on him. He recovered to get though the order without giving up a hit, but then promptly gave up another solo homerun to C.Y (Only If I could somehow CGI Brian Anderson to do the Ted Lilly glove slam... ). He nearly gave up a third homerun to Young in the 5th ('...flies out to deep RCF') but still allows another run in the form of a O-Dog infield single the scores the earlier-in-the-inning double producer Doug Davis. 3-0 to 2007.

Brian Anderson would stay in for the rest of the game, besides finding trouble in nearly every inning. In the 6th he gets a fielder's choice that leaves runners on the corners and the 8th retires Reynolds that strands a Co-Jack double.

In the Top 9th, Double D still laboring, Andy Fox (PH) and Tony Batista are both retired quickly. Unfortunately a CG Shutout wasn't in the cards for Davis, as he gives up a two-bagger to Devon White and a 2-run Homerun to Matt Williams. With the somewhat potent bat of Jay Bell coming up to the plate, Bob Melvin doesn't risk it, and brings in Jose Valverde for the one-out save. 4 pitches later, the ball is in Conor Jackson's glove with Papa Grande doing his seizure-ific Save-lebration.

With the Series back in the purple and teal streets of 90's Phoenix, the 98 team finally finds early offense, grabbing a run in the 2nd on a Tony Batista single that scores Dellucci. Dellucci would also score in the 4th on a Daal single, and along with a Devon White RBI, would give the Inaugural team 3 runs in 4 innings (after getting 3 in the last 18).

Miguel Montero briefly tied the game at 1 in the Top half of the third with a solo shot, but besides that Omar Daal throws an impressive first-5, only allowing 3 hits. The 6th inning would be trouble for him, as he lets up a walk to CY and a single to Orlando Hudson. He's able to retire Byrnes, CoJack and Drew while just allowing CY to scamper home on a Byrnes groundout. 3-2 '98

In the bottom half of the same inning, Livo gets into his own 1st-3rd jam by allowing a double and single back to back. Andy Fox is caught stealing by Montero, before Batista grounds out for the third out.

To the Top 8th, '07 down a run, the offense gets another 1st-3rd chance with just one out. With a 'Clint Sodowsky' pitching, Drew pops out in front of Mark Reynolds. But Reynolds picks up Drew by single-ing in Hudson to tie the game up. Willie Banks is brought in to keep the game even, but walks J-Up to load the bases. Montero spoils the opportunity by flying out to Left-Center.

In a change of pace, the teams trade reliever-carousel, pinch-hitting happy, no offense innings past the ninth and into the 13th. With Aaron Small brought into to pitch for the 1998 team, Byrnes single, and grabs second moments later with a steal. Small is able to get CoJack and Drew out, before Buck decides to walk Reynolds to get to the youngster Upton. J-Up tries his best to find a hole, but Matt Williams is able to get a force out at 3rd.

With Dustin Nippert starting the bottom half, he allows a 1-out double to Damien Miller. He's quickly lifted for Brandon Med... oh no not Brandon Medders...... Yamil Benitez is walked by thee oh-so controlled pitches of Medders. That of course sets up a line drive game winning single by Tony Batista to score Miller. 98 stays alive with a walk-off!

With Amaury Telemaco attempting to force a Benes v. Webb Game 5, he toes the rubber and... promptly gives a lead off homerun to Chris Young. Im not going to lie, I think this Series has correctly summed up Chris Young's post-season awesomeness (.326/.453/.721 5 HRs 9RBIs in 12 games).

Telemaco won't get out the inning without allowing another run courtesy of a Stephen Drew single. He gets in trouble the very next inning, allowing 2 hits and 2 fielder's choices that gets another run across the board and another RBI for Young.

Meanwhile R.J. is having little issues with the New-Backs. He has a classic Big Unit day: He is able to work out of a jam in the first, then follow it with 3 innings of 1-2-3 baseball, including striking out the side in the 3rd. In the Top of the 5th, Chris Young continues to have a MONSTER Series by hitting yet another HR. Follow it up with some small ball and a Reynolds RBI scoring Byrnes and Telemaco is out of the game. Chris Young adds to his number in the 6th inning by.... hitting his third homerun of the day. 6-0 to 2007, and it looks bleak for '98.

In the bottom half of the 6th, after two more Ks, the 98 team is able to scratch in a run. A Travis Lee bloop single scores two, and gets R.J. pulled for Tony Pena. They threaten in the 7th and 8th, but are only able to score in the latter inning with another Lee RBI scoring Matty. They are scratching too little too late, as Valverde gathers the Series clinching save K'ing both Batista and White. 6-3 '07

This close-year matchup begs these Questions:

Whose Webb will pitch a better game?

Whose Bautista will pitch a better game?

Which Counsell will be a better lead-off man?

I personally think both Webbs have the potential to go all 9 with either a 1-run CG Loss or a CG Shutout. I guess we'll have to see next week!