Share All sharing options for: Arizona Fall League: Baseball In A Winter Wonderland 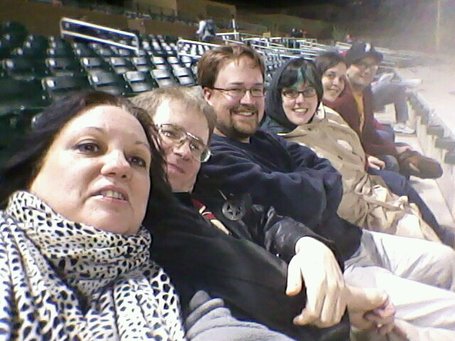 I'm not saying it was cold last night at the Arizona Fall League... But they pinch-ran for one batter with a team of huskies. It was so chilly... [Altogether now: "How chilly was it?"] It was so chilly, that the grounds crew didn't rake the base-paths, they used a zamboni, and the fielders wore gloves on both hands. On this evening, AFL stood for All Frostbitten Limbs. Ok, slight exaggeration, though the box-score temperature of 57F was a sick fantasy by the time the game finished at 9:30pm [checking the nearest weather station, at 64th St + Osborn, 49F was closer]. But this was certainly not the Arizona I signed up for: y'know, the one with the palm-trees and the swimming-pools.

It was still a lot of fun - but, sorry Dan, this report probably won't be the place to see in-depth reports on prospects. Hey, what could I do, the ink froze solid in my pen...

We had come prepared. Seriously, this was the first time I'd worn long pants since, maybe March. And my trusty leather trench-coat - bought on a trip to Arizona, back before I moved out here, so we're talking a good dozen or more years - got its annual excursion out of the closet. Scarf? Check. Gloves? In pocket. Quilt? No, really, Mrs. SnakePit, are you serious? Why, it appears that you are. Fortunately, the rules on what can be taken in to Salt River Fields appear somewhat lax, and not exactly enforced, so explanations on why were carrying bedding in to the stadium proved unnecessary. Can only feel for the players, not able to wrap themselves in blankets.

Great things about the Arizona Fall League include that it's $7 to get in, and you can pretty much sit where you want, even directly behind home-plate. Though on this night, "even" should probably be, "even on the outfield lawn," since there was absolutely no-one out there at all - if there'd been any home-runs hit, they would have likely been left there, unless someone could have been bothered to saunter round from the stands to pick them up. We went for the front row at the Rafters dugout, which worked well; the rain which was threatening on arrival, held off, for which we were pretty grateful.

The Rock Lobsters and Oars. It's just like a night at Martini Ranch.
[Think about it... We'll wait for you...]

The AFL has six teams, each of which contains prospects from five major-league teams. For instance, the Salt River Rafters includes Diamondbacks, Rockies, Dodgers, Astros and Tigers. The players wear the parent team's jerseys, but the AFL team cap, which makes for a kinda weird feeling, stylistically, on the diamond. As there can be half-a-dozen different uniforms on view at the same time, it looks more like a pick-up game at the local park than a showcase for future superstars [Of the recently-announced awards, nine Gold Glovers and eleven Silver Sluggers passed through the league on their way to the majors]

Those taking part tonight included a number of top prospects. The Scottsdale Scorpions roster included overall #1 pick in 2010, Bryce Harper of Washington and Mike Trout, the Angels phenom who reached the majors this season, at age 19, and hit five home-runs in 40 games. Harper wasn't taking part tonight [to Turumbar's disappointment], but as is normal, did see action as the first-base coach, a position manned by non-participating players. That said, Harper (and his new facial hair) wasn't exactly engaged in the job: I don't think he bothered to speak to any base-runners, or even came within ten feet of them. He was likely just trying to stay warm. 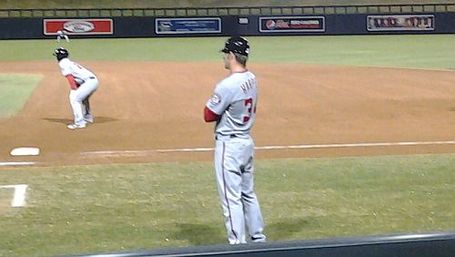 Bryce Harper: not a future coach.

The Rafters, for their part, included Nolan Arenado, who the word is, could be a starter for Colorado in 2013. But, of course, we were there for the D-backs, and got to see five of our seven guys in action. Starting for Salt River were 2B David Nick, RF Adam Eaton and 3B (converted from 1B) Ryan Wheeler . All three men got hits, and they went a combined 4-for-11 on the night. Two were by Eaton, including a lovely bunt-single to lead things off in the first, while Wheeler drove in a couple of runs, with a double and sacrifice fly out of the clean-up spot, and flashed some decent leather at the hot-spot.

On the pitching front, Bryan Woodall worked a scoreless seventh, allowing a hit but retiring the other three batters he faced. However, Eric Smith struggled somewhat in the eighth and ninth, giving the Scorpions a run in each frame, on four hits and a walk, though did strike out three, including Trout, who went down fishing. Hohoho. There. That's the meaningful analysis out of the way. :) I should mention Salt River won the game 9-4, and are currently leading the East division of the AFL, 3.5 up on Mesa with nine games left. Eaton has performed particularly well, hitting .355 and leading the league with 27 runs scored.

As you can see from the various pics, it wasn't exactly crowded; the announced attendance of 346 was about as realistic, by the end of the night, as the announced game-time temperature. There was still a concession stand open, which was doing a roaring trade in coffee and hot-chocolate - at two bucks a pop, it was certainly worth the investment, and we gratefully accepted the donation of a late-inning top-up from a generous benefactor. As well as the blanket, Mrs. SnakePit had brought a selection of high-sugar snackettes, which helped stave off hypothermia over the evening. 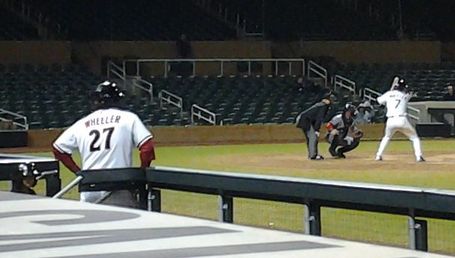 The near-silence makes for an interesting experience. The good thing is, if you yell at the players, you know for sure they are hearing you. The bad thing is...well, if you mention the players in just about anything above a stage-whisper, you know for sure they are hearing you. Key to our surrealist performance was the two Wheelers in the Rafters line-up; as well as Ryan, there was CF Tim. As the latter played for the Rockies, he was immediately dubbed "Evil Wheeler" - or "Undead Wheeler" during the latter stages - with our version labeled "Good Wheeler". Both were gently encouraged, appropriately.

Well, I say "gently encouraged". Our row was about 2% of the attendance, but likely responsible for about 50% of the noise [49% came from Superfan Susan, the next section over, telling all the players they were the best in the billion infinite universes. That's a direct quote.] Other amusement came from "someone" - names changed to protect the guilty - pointing out the similarity between the Rafters' catcher, in his blue helmet and white uniform, and a certain, much-loved character from science-fiction. Hence the loud beeping from us, every time he came to the plate, and when a truck's reversing alarm was heard late in the game, we decided that was his mother cheering him on.

That said, some players appreciated our enthusiasm. Wheeler - no, the good one - tipped his hat in our direction a couple of times, and after we Tweeted him post-game to thank him for being a good sport, responded, "Thanks for the cheers. Any energy from the crowd at an AFL game is much appreciated," and added, "I'm glad I was "good" Wheeler". Adam Eaton got in on the act too, Tweeting, "No love for the little guy or what? Haha..." and calling us "Easily the loudest group of the year." Mission accomplished. We will catch Eaton in spring training. He should check with Jeff Francoeur on this, and be sure to decide in advance whether he prefers Star Trek or Star Wars....

Despite the near-frozen conditions, this was a lot of fun, from reading aloud the Wikipedia article on "balaclavas", through hoping the Scorpions' Dent would get to interact with first-base coach Panik (we had our Hitch-hiker's Guide to the Galaxy references all ready!), to pretending we were at a rave, after the inter-inning music kicked into some hardcore techno. Thanks to the SnakePitters who showed up, and the players for giving their all in the bleak midwinter. The next time we attend a baseball game, I trust it will be slightly warmer.