The Arizona Diamondbacks are the 2001 World Series champions. Somehow, that "ten words or less" synopsis doesn't come anywhere close to doing justice to what history will surely record as among the most amazing Game Sevens in World Series history. Trailing in the ninth against Mariano Rivera, who had converted 23 consecutive post-season save opportunities, the Diamondbacks scratched out two runs. Luis Gonzalez - the man who hit 57 home-runs in the regular season - had a 120-foot bloop over the drawn-in infield, to score Jay Bell from third.

It's only the second time in World Series history a team has won Game 7, after trailing going into the ninth - the 1997 Marlins did it too. And who scored the winning run there? Craig Counsell, who was hit by a pitch, immediately before Gonzo's game-winner.

This might be a bit less... focused than my usual recap. :-)

Maybe we should have know it would end this way. In the regular season, teams leading after eight innings won 95.4% of games played. But in this series, their record was only 4-3. After the dramatic events of game 4 + 5 in New York, where the Yankees rallied against the D-backs closer, Byung-Hyun Kim, it seems entirely fitting that Arizona should rally against a man who had allowed six earned runs in 77.2 post-season innings before tonight: a 0.70 ERA. So when he was handed a lead in the eighth inning, to quote Andy Pettitte, "The game is over as far as we're concerned." Or Derek Jeter: "2-1 in the bottom of the ninth with Mariano on the mound: most teams would give up."

Not these 2001 Diamondbacks. Mark Grace led things off with his third hit of the night, a single to center, saying afterward, "My first reaction was, 'Uh, oh, just don't embarrass yourself.' But then the guys kept saying, 'You've got to believe, you've got to believe.' You know, the way things went in New York, we figured we owed those guys. They did it to us twice, why couldn't we do it to them? Even to Rivera." Bob Brenly replaced Grace with the speedier David Dellucci, and then came perhaps the key play of the inning. Tying run on base, no outs. 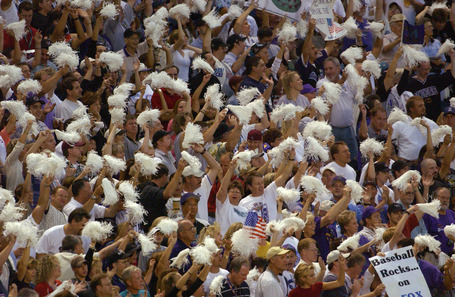 Damian Miller was up there to bunt, but it was a poor sacrifice, straight back to Rivera, who went to second for the force. However, he even throws cutters to his infielders, and the ball sailed past Jeter to the outfield, and both Dellucci and Miller were safe. Rivera looked back ruefully on that error: "I think if I had made that play to second base, that was the whole game right there. If I had made that play to second base, we would have had a good chance. I didn't have a good grip on the ball and it just took off." Tying run in scoring position, no outs.

Jay Bell, pinch-hitting for reliever Randy Johnson (yeah, we'll get to that little nugget in due course!) put down another bunt. Again, it was poor; again, Rivera fielded it and went after the lead runner. However, this time, his throw to third was good, erasing Dellucci [as Mark Grace sardonically added, "I'm mad at Brenly for running for me. I could've gotten thrown out at third."]. Midre Cummings ran for Miller on second, with Bell on first. Tying run in scoring position, one out.

Up steps Tony Womack, who had already been uber-clutch in the post-season, with a key hit in the decisive Game 5 of the Division Series against St. Louis. And he was equally successful here. Despite Rivera breaking his bat, Womack was able to knock the ball down the right-field line, and Cummings scored easily. After failing to get the bunt down, Bell praised his team-mate: "I know Curt and Randy were the co-MVPs but as far as I'm concerned there was a third one. Tony Womack was an MVP of this World Series." Winning run on third-base, one out.

Counsell, who had driven in the tying run in Florida's Game 7 four years ago, had a chance to go one better here, and have the World Series-winning RBI for Arizona. However, it was not to be, though he still did get on base. After fouling off the first pitch, he was plunked by Rivera - only the second man hit by the Yankees' closer in his post-season history. "It started to look like it was happening the same way as '97," he said. Winning run still on third, still one out - except now, there was nowhere for Rivera to put anyone.

Gonzalez said, "Stepping up to the plate there in the ninth inning, that's what everybody dreams about. A key situation to drive in the winning run in the World Series, against one of the best relievers in all of baseball. I choked up (on the bat) and to be honest with you that was the first time I did it all year," adding, "I was just trying to loop a ball. I saw they had the infield in. I didn't have to hit it hard. I just had to put it into play and not hit into a double play... I just needed to keep my hands in and make sure I got through the ball."

In Gonzalez's 802nd plate-appearance of the season, the first pitch was fouled off, but on the second, the ball was put in play, and floated through the air.... Said Jerry Colangelo: "It was a moment that was etched in time. The ball didn't seem to want to drop," but Jay Bell realized what the end result was going to be a little earlier: "Once I saw Derek backpedaling, I saw they had no chance. I'm going home thinking, good gracious, this is it." And Gonzo: "I'm running to first, and I can't believe it. I can't believe it's me in that situation. The first guy I was greeted by was Eddie Rodriguez, our first base coach. Then the whole pile got there. It was total chaos. It was an unbelievable feeling."

I just spent 750 words describing one-half of one inning in tonight's contest, and it's natural to focus on a dramatic climax which would have been rejected by Hollywood as implausible. However, that was merely icing on a tremendous game which had everything. That would include, a pair of tremendous starting performances from Curt Schilling and Roger Clemens, runners thrown out at third, a near-miraculous home-run and the sight of a three-time Cy Young winner (with a fourth surely a near-certainty) coming out of the Diamondbacks bullpen. 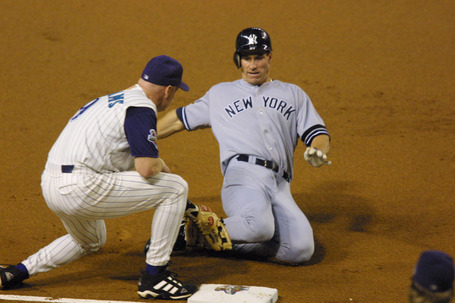 Where to start? What about with Randy Johnson, who became the first pitcher to win a World Series Game 7 in relief, after starting Game 6, since Harry Brecheen for the 1946 Cardinals. And Brecheen had a day's rest: the Big Unit had no such luxury after seven innings for Arizona yesterday. If you didn't get goose-bumps on the site of him striding in from an unexpected direction in the eighth inning (though he won Game 5 of the 1995 ALDS out of the bullpen with the Mariners), you probably have a fondness for brains. The weird dust- and rain-storm which swirled out of nowhere the previous frame to blow around Bank One Ballpark, seemed like an omen of all that was to come.

Credit Schilling every bit as much, pitching once again on short rest, and blanking the Yankees into the seventh. Indeed, he faced the minimum through the front six innings, with the only base-runner a double in the first, and he was gunned down by Danny Bautista, trying to stretch it into a triple (above). Meanwhile, the Arizona offense was being shut down almost as effectively, if less spectacularly, by Roger Clemens. While he didn't have a single clean inning, he got the outs when they mattered; Clemens stranded Diamondbacks in scoring position after each of the first three innings, the home team hitters going 0-for-4 with four strikeouts in the clutch.

The game stayed scoreless until the bottom of the sixth, when Steve Finley singled to lead off, and Bautista - again replacing Reggie Sanders - doubled to the wall in left-center. Unfortunately, Danny Boy had failed to learn from his own assist in the first, and was thrown out at third. That gave Arizona the lead, and with Schilling having retired 16 Yankees in a row at that point, it seemed briefly as if that tally might be sufficient. Theb, in his 48th inning of this post-season campaign, Schilling finally tired and the visitors pounced.

Three singles led to their first run, and then the lead-off hitter in the eight, rookie Alfonso Soriano somehow got one of Schilling's splitters. "That nearly bounced in the dirt," Brenly said. "Miller was going down to block the thing and he just golfed it out of there." It momentarily stunned the crowd of 49.589 in Phoenix, but they soon bounced back, the stands returning to a sea of white pom-poms. And before they saw Johnson in his unusual relief role, another starter.took the mound for Arizona. Miguel Batista, who threw 7.2 shutout innings in Game 5, came in and got Jeter to ground-out. One doubts, however, if history will remember his appearance in quite the same way as Johnson's.

Johnson followed, but Arizona couldn't get anyone into scoring position in the seventh or eighth. Womack singled with one out in the seventh, but was caught stealing second, and Finley singled with two outs in the eighth, but that merely delayed Rivera striking out the Diamondbacks. With our 7-8-9 hitters due up in the bottom of the ninth, it seemed only a matter of time before the Yankees would win their fourth straight World Series.

How little did we know.

Worth noting that Rivera's -62.5% slots in at 14th-worst all-time for a pitcher in a World Series, two slots behind Kim's Game 4 performance. The Series co-MVPs were Schilling and Johnson, a huge part of why the Yankees hit .183 in the series. They had an astonishing run, all the way through these playoffs. Combined, Curt and Randy went 9-1 in 11 starts and one relief appearance, with five complete games and a 1.29 ERA over 90.2 innings. Schilling was the first ever to start six games in one postseason, while Johnson won three games in a World Series, the first since Mickey Lolilch with the 1968 Tigers. 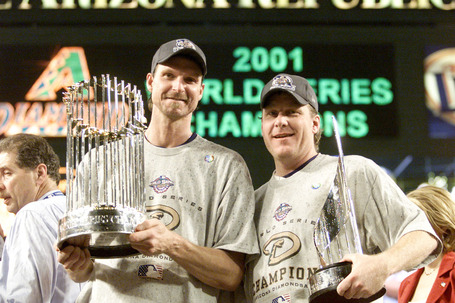 Here's another staggering number. RJ and CS pitched 596 innings for the Diamondbacks all told this year. Mark Grace, as ever, had the words for the occasion.

All through the series, we were hearing about the aura and mystique of the Yankees, well our aura and mystique are Curt and Randy. What can you say about those guys? Curt shows again why he's a warrior. And Randy takes the ball and gets the win. They said all year that they raised the bar for each other. I am just glad I am on their team because that's 30 less outs I get to make. They are amazing.

This is kinda cool. Tom Verducci points out: "With Johnson getting the win and Rivera the loss, this may turn out to be only the second time in World Series history that two future Hall of Famers earned the decisions in a seventh game. The only other Game 7 clash of Hall of Fame titans occurred in 1926, when Jesse Haines of the Cardinals outdueled Waite Hoyt of the Yankees, 3-2. That series also ended with a shocker: Babe Ruth was thrown out stealing for the final out." But the final word can only go to Luis Gonzalez, likely the team's Most Valuable Player in the 2001 season

"The storybook ending is a bloop single."

Truly a magical end to a magical series, that will live in the memory of all who experienced it, from the Stealth bomber which flew overhead before first pitch, through to the Texasest of Texas Leaguers that ended the 2001 season. Below, is perhaps the happiest picture of the post-game celebrations I can imagine: 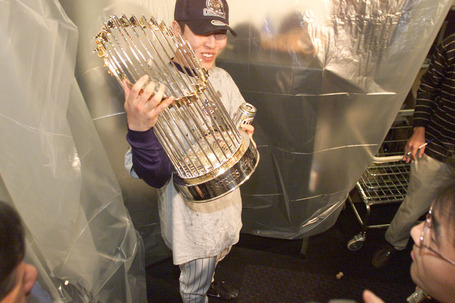 Oh, and I proposed to my girlfriend immediately after the game ended. I had to do it twice: she didn't hear me the first time, what with all the commotion...