The Diamondbacks And Their Cy Young Dominance

Share All sharing options for: The Diamondbacks And Their Cy Young Dominance

Ian Kennedy's showing in the National League Cy Young voting continues an incredible run of success for the franchise in this award since the team first competed for it in 1998. Only four times in the fourteen years since - 1998, 2003, 2005 and 2010 - has there not been a Diamondbacks' representative in the results, and as the graph above shows, Arizona pitchers have received more than twice as many Cy Young points as any other team in the league over that time. Heck, they've earned more than the entire NL East. combined  Let's look at the extraordinary dominance of the D-backs in this award.

It's particularly interesting, given the way BOB/Chase has historically always played as a pitcher-unfriendly park - and environment is not something that seems to be particularly taken into account by BBWAA voter. Despite this, the MVP has proven much less Arizona-heavy. No Diamondback has finished higher than third, which is where Matt Williams did in 1999 and Luis Gonzalez, two years later - Justin Upton is probably unlikely to beat that this year, though I would think somewhere between 3rd and 5th is quite possible. That would be the best result by an Arizona player since Gonzo

But contrast the Cy Young, where a Diamondback has come first or second ten times in the team's brief existence. That's four wins and a runner-up position for the Big Unit; one win and two seconds for Brandon Webb; and two runners-up spots to Curt Schilling. Both the last-named were behind Randy Johnson in 2001 and 2002, representing the only times since 1974 that the winner and runner-up in the National League Cy Young have come from the same team [then, it was the Dodgers' Mike Marshall and Andy Messersmith. Heck, the highest MVP performance from a D-back post-2001 is currently the 7th place, the following season...by. Johnson.

Obviously, Randy is a huge factor in the numbers for the Diamondbacks. His 680 points as an individual are more than any other team has accumulated since 1998. But even if you inexplicably discount the Big Unit's numbers entirely, the rest of Arizona's pitchers have racked up 537 points, still good enough for second-place, fractionally behind the Cardinals. Obviously, things have dropped off of late, with Dan Haren's single third-place mention the only one in 2009 and 2010. But Kennedy's respectable showing this season is, hopefully, the start of another cycle of pitching goodness, with Daniel Hudson, Trevor Bauer, etc. perhaps adding to the total going forward.

It's startling to realize the gulf between the "haves" and the "have nots". Kennedy's 76 points ranks him only 11th-most in Diamondbacks' history. However, it's still more than four franchises - the Reds, Brewers, Pirates and Expos/Nationals - have received combined, over the past fourteen seasons. Pittsburgh have been entirely absent from the Cy Young results for as long as they've been absent from a winning record. Their last pitcher to receive even a single third-place vote, was Doug Drabek, who did exactly that in 1992. Given the most wins by a Pirate since is 15 (Todd Ritchie in 1999), this absence is largely understandable. 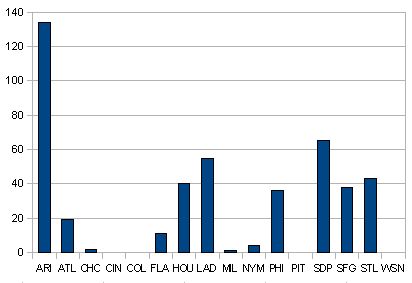 The situation is more or less the same if you limit the data to first-place votes, with the Diamondbacks having gained more than any other two National League teams combined, with Kennedy's appearance there the first since Webb got four in the 2008 balloting. Second-place there goes to the Padres, with almost half their tally due to Jake Peavy's unanimous victory in 2007 Cy Young, though they do also get contributions from Trevor Hoffman and Kevin Brown. These days, however, Petco appears to be viewed as the kind of place where you should put up good numbers; no Padre has received a first-place vote since Peavy, even when winning 90 games last year.

In terms of overall mentions in results, the D-backs do trail the Astros - though so many of those are right at the bottom, I wonder if it's just that the Houston writers might be more homerish than most. The majority of Astros' representatives - eight of 15 - scored three or less points, so clearly make up for in quantity what they lack in quality Though that's a little harsh given that of the 1,591 pitchers who have appear in the National League since 1998, more than 96% did not get any love from the BBWAA. While the awards cliche is to say, "It's an honor just to be mentioned," in the case of the Cy Young, it's probably true. 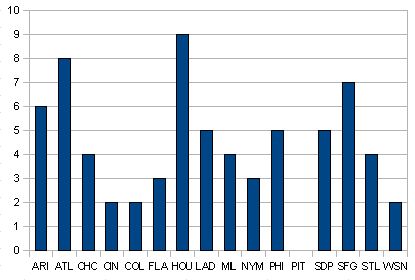 Finally, if we look at how many separate players have been nominated for a team, things do flatten out considerably. While the Astros still lead the way on nine, the Braves move in to second-place, and there's a bunch of teams who are in the 5-6 player range. I think it's perhaps the case that good players can get one Cy Young mention [the list who did in the time concerned included such names as Aaron Harang, Jose Lima and, er, Russ Ortiz]; however, if you can perform well enough to pick up multiple nominations, that then takes you into another, different category. From 1998-2011, that's a club of only about twenty NL pitchers; truly the elite of the game.

And three of them were Diamondbacks.

Here's the full table of data since 1998. The Expos' number [well, one vote!] were folded in to the Nationals' total. Roy Oswalt's 14 points in the 2010 voting were split evenly between Houston and Philadelphia. However, he counts as a player and unique player for each team's tally.