Diamondbacks 2, Brewers 3 - It All Ends Today

Share All sharing options for: Diamondbacks 2, Brewers 3 - It All Ends Today

Win or go home. Elation or Despair. One game, one result, one emotion. Which would it be?

Down in the series 2-0 when we last left Milwaukee, Arizona won both home games in decisive fashion to push the series back to Miller Park for Game 5. In a rematch of Game 1's starters, both were solid and the teams exchanged plenty of zeros. After losing an early 1-0 lead, it was only fitting that the Never Say Die-mondbacks pushed across the tying run in the top of the 9th inning. But the team ran out of comebacks, closer J.J. Putz gave up the winning single to Nyjer Morgan in the bottom of the 10th inning, and the Milwaukee Brewers advanced to the National League Championship Series.

The Texas Rangers won their Game 4 in Tampa Bay. The Detroit Tigers won their Game 5 in New York. Could the Arizona Diamondbacks continue the trend of visiting teams' success? The road team has won nine of 15 League Series Game 5s in the wild-card era, but in this series, all the games had been won by the home team. There's nobody else Diamondbacks fans would've rather had on the mound this afternoon than ace Ian Kennedy, and the D-backs are 25-9 in his starts. But Yovani Gallardo had Arizona's number last week in Game 1. It was going to come down to which team - and manager - could make the adjustments.

The book on Gallardo is to jump on him early in the game. After two easy outs in the 1st inning, Justin Upton had a good at-bat and walked, then advanced to second base on a wild pitch, but Miguel Montero struck out. No runs, but they did get Gallardo to throw 22 pitches in that 1st inning. In the 2nd inning, again with two outs, Ryan Roberts singled and Gerardo Parra walked in front of Ian Kennedy. Kennedy too put on a great at-bat, not swinging at many pitches out of the zone, and he almost lined one into the gap, but Ryan Braun made the catch. Gallardo threw another 22 pitches in that inning.

Arizona finally struck first in the 3rd inning. After two easy outs, again, Upton was at bat and was nearly struck out on a good pitch from Gallardo that looked like a strike according to that blue boxy thing. But home plate umpire Jeff Kellogg called it a ball, and on the 3-2 pitch, Justin Upton lined the ball over the short fence in right field, right into the Diamondbacks bullpen for a 1-0 lead - Arizona's first lead in Milwaukee all series. That was the 10th home run by Arizona in the series, the second by Upton. Miguel Montero then struck out on Gallardo's 66th pitch at the end of the third.

Meanwhile, Ian Kennedy was dealing early on, and he had clearly adjusted well to the playoff atmosphere at Miller Park. He allowed only one hit through the first three innings, and that was a two-out single to Ryan Braun in the 1st. He had thrown only 36 pitches, 28 of them for strikes, and was painting the corners well and keeping the Brewers off-balance. But he ran into trouble in the 4th inning. Nyjer Morgan led off the inning with a double and advanced to third on a wild pitch. Kennedy walked Braun, which wasn't really the worst thing that could've happened, and then got Prince Fielder to pop out to left. Aground ball to an infielder would've gotten Ian out of the mess without damage, but he hit Ricky Weeks. Jerry Hairston Jr. blooped a single that almost landed between Goldschmidt, Hill and Upton, but was caught over the shoulder by Aaron Hill. Morgan tagged (though on replays it looked like he'd left early) and raced home to tie the game at 1-1.

Arizona had a chance to score in the 6th inning. After two outs from Upton and Montero, Paul Goldschmidt singled on a ball completely misread by Nyjer Morgan in center field. Though Chris Young then singled, the Diamondbacks couldn't capitalize, and Ryan Roberts ground out to third.

In the Brewers' half of the 6th inning, Milwaukee took their first lead of the day. Ryan Braun led off with a double to left, and Kennedy seemingly pitched around Fielder with a 4-pitch walk to put two on and nobody out. Weeks tried to sacrifice the runners over but instead bunted out to Kennedy, and Hairston laced a ball to deep, deep, deep center field. Chris Young kept going back and got a bit turned around, but made a running catch of the ball and then ran into the center field wall and held onto the ball. It was only the second out, but it would've plated both runners. (As it was, they had gone halfway and had to go back to their bases, so it wasn't even a productive out.) Hairston, Braun, and everybody in attendance couldn't believe that was caught. It was an amazing catch, go watch it now if you haven't yet seen it. I'll wait. .... Okay, well unfortunately, two outs do not end an inning, because otherwise we would've ended the inning tied at 1-1. But Yuniesky Betancourt was up next, and he hit one that landed just a bit in front and to the left of Young, and Braun scored to put the Brewers up 2-1.

We had reached the Milwaukee bullpen, nine outs to go and down a run. A 1-2-3 7th inning against Takashi Saito didn't do much to calm the "ZOMG SEASON OVER" fears festering in the gameday thread since the Betancourt single. Then we came to the 8th inning against Francisco Rodriguez. Aaron Hill walked to lead it off, and suddenly hope was reborn with the heart of the order due up. We were all hoping for another Justin Upton home run, but he struck out swinging. Miguel Montero laced a single to right field, and Hill scampered to third base, and we had runners at the corners. All we needed was a sacrifice fly to tie the game, but Goldschmidt followed in Upton's shoes and struck out swinging. Chris Young walked to load the bases, and being in scoring position now, Montero was pinch-ran for by Collin Cowgill. Would it be another grand slam for Ryan Roberts? That would've been nice, but instead he ground out to the shortstop.

We don't get to the bottom of the 9th still down only a run without phenomenal relief pitching. Bryan Shaw had relieved Kennedy in the bottom of the 7th and struck out the side, and David Hernandez had a similarly easy 8th inning against the heart of the Brewers' order in Braun, Fielder and Weeks. Now it's time for the end of the lineup to face Milwaukee closer John Axford, who hadn't blown a save since April 18th against Philadelphia. Well, there's a first second time for everything. Gerardo Parra broke an 0-for-17 NLDS slump with a double to center, and Sean Burroughs singled to left and Parra was stopped at third base. (He also tripped, but he was being stopped by Matt Williams. It was too shallow for him to have scored.) In true #GibbyBall fashion, Willie Bloomquist then dropped down the safety squeeze bunt. It landed perfectly between Fielder and the pitcher Axford, who nearly collided with each other as Fielder fell down. Willie was safe at first and Parra was safe at home with the 2-2 game-tying run. There was much mayhem and cheering and hope for add-on runs as we've turned the lineup over and have two on with nobody out ahead of the 2-3-4 hitters. But once again, the Diamondbacks failed to hit with runners in scoring position. Aaron Hill struck out, Justin Upton grounded into a fielder's choice and homerin' Henry Blanco (remember, Montero was pinch-ran for in the 6th) also ground out. Arizona was 2-for-11 with RISP on the day, those two hits being the ones from Burroughs and Bloomquist that scored Parra.

Still, it was a tie game in true Diamondbacks fashion. David Hernandez went back out for the bottom of the 9th and made easy work of the Brewers yet again, and we were going to extra innings in game 5. Because why not? It had been a great tense back-and-forth matchup so far, it was fitting that it would go into extras. The Brewers sent Axford back out for the 10th, and this time he made easy work of the Diamondbacks. Goldschmidt flied out to the warning track, but Young grounded out and pinch-hitter Lyle Overbay struck out looking.

To the bottom of the 10th we go, and we call for J.J. Putz out of the bullpen. In the biggest game, you put in your best pitchers, and J.J. had been the best. First, he got Craig Counsell to fly out to Upton in right. Whew, well at least it wasn't going to be a former favorite Diamondback that was going to beat us. But than Carlos Gomez singled to left. Well, okay J.J. was just going to induce a double play, he's done that plenty of times before. But Gomez took a risk and stole second base (while the ball simultaneously got away from the catcher Blanco). So no double-play in order, it was time to strike out the batter Nyjer Morgan. ... Sadly, no. It was Morgan who singled back up the middle, a slow roller over the mound and past a diving Bloomquist. Chris Young had no chance to throw out Gomez, and the Brewers won the game and the NL Division Series. They now face their division rivals, the St. Louis Cardinals, for the National League pennant. 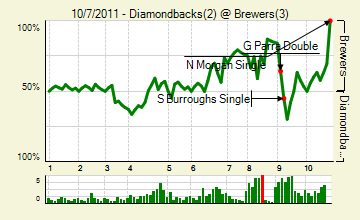 I think that fangraph accurately reflects the energy of the day. It was incredibly tense in the gameday threads. People were forgetting to breathe (in particularly certain pregnant people!), other people weren't allowed to leave and use the bathroom. (Sorry, them's Rally Rules.) There was excitement, nausea, elation, despair and frustration all within about a 20-minute span late in the game.

There were several good candidates for Commend of the Day. I laughed the hardest at 4 Corners Fan's response to a question about "throwing J.J." I think you're right, Anne, the rules do specify you have to throw a baseball. ;) But SenSurround summed up all our feelings with his comment in the 9th inning.

WIN OR LOSE, HANDS DOWN BAR NONE
THIS IS MY FAVORITE TEAM FOREVER AND EVER. THANK YOU FOR THIS FREAKIN UNBELIEVABLE SEASON

In the end, it was pretty typical of the 2011 Diamondbacks' season. (Except, look, no outs on the basepaths!) Some of the usual heroes played their roles - Upton with the home run, Parra with the leadoff double, Hernandez with two clean innings - followed by lesser-known heroes in unexpected places - Burroughs with a single, Bloomquist with a bunt, Shaw striking out the side. If we were going to lose, we were going to lose with our ace in Kennedy to start it and our closer in Putz at the end of it. It truly was anybody's game, it just didn't work out in our favor this afternoon.

That may be it for the 2011 Arizona Diamondbacks, but that's not the end for those of us at AZ Snakepit. If you find yourself lacking Internet activity and still hitting Command-6 every hour to visit the 'Pit, you'll find some more roundtable discussions, all the news in Snake Bytes, and gameday threads to cover the rest of the post-season. We'll have a very special interview with the voices of the Diamondbacks, Daron Sutton and Greg Schulte, any and all off-season news, and our own features postulating what's next for the team.

So don't go anywhere, or at least don't go for long, because we'll still be here. :)