Winning Game 5: What The D-Backs Need To Do

Share All sharing options for: Winning Game 5: What The D-Backs Need To Do 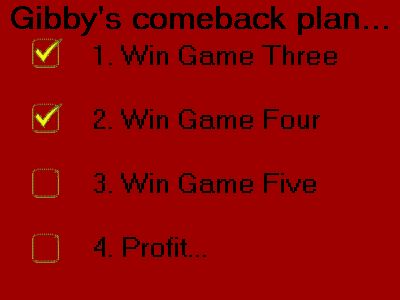 So far, so good. The Diamondbacks have already done the bulk of the heavy lifting, winning back-to-back elimination games against the Brewers, setting up a winner-take-all battle in Milwaukee later today. It'll be a rematch of Game 1, where Ian Kennedy went up against Yovanni Gallardo, with the home team prevailing 4-1. Obviously, the visitors will be hoping to reverse things this afternoon. Let's look at what they'll need to do, if they are to progress to the Championship Series.

Hit the road, 'Backs
Arizona may seem to have all the momentum, after two emphatic victories at Chase Field, where they scored 18 runs in only 16 innings. But as Milwaukee can tell you, momentum is an ephemeral thing, that does not necessarily last through off-days and journeys of 1,500 miles. On the one hand, as soco pointed out, of the five teams which came back from 0-2 down to force a Game 5, four won it all, including two who did it on the road - curiously, both of those were the Red Sox, in 1999 and 2003. On the other hand, the Brewers had the best home record in the National League, and we saw last weekend why this was the case.

It's an area where the Diamondbacks have historically struggled in the post-season, with a 5-11 record on the road during the playoffs. Over their three October campaigns since winning the World Series a decade ago, they have just a solitary victory away from Chase - the clincher in the 2007 Division Series against the Cubs at Wrigley Field.  That 1-5 record is worse than normal: over the same period, post-season teams playing away have won 136 of 304 games, a 44.7% success rate, very close to the regular-season mark of 45.6%. So it doesn't seem, overall, there's any extra 'home edge' in the playoffs. Hopefully, the D-backs are ripe for regression there.

Get Kennedy back on track
There's no doubt that Ian Kennedy's performance in Game 1 was disappointing. The good news is, if the pattern from this season repeats itself, he'll rebound to being the ace that we all know and love, because he rarely has two bad outings in a row. His Game 1 outing resulted in a Game Score of 44. Here are the three comparable starts of Kennedy's 2011, along with what he did in his next outing.

Over the three contests immediately following his most similar games, Kennedy went 2-0 with a 1.17 ERA. Admittedly, all of them were at home, and not against the same opponent. However, even expanding the sample size a bit, to the seven starts where Kennedy posted a Game Score of less than 50, in the next game he averaged a Game Score over 30 points higher, Ian going 6-0 with a 1.49 ERA.

Kennedy said after Game 1, "My location was all over the place. I wasn't getting ahead of guys. That pretty much sums it up." Certainly, he did have some control issues. While his overall strike percentage of 69% was actually a little better than his season average (67%), he only threw a first-pitch strike to 17 of 31 batters faced, a 55% rate that is considerably lower than usual (64%). Sounds like he has the right approach: "I think just using that experience, just like any experience, you learn from it. And you try to build and learn the positive things from it. I've definitely got the first one under my belt. And this one hopefully helps me my next start."

Slay the beast
I've already discussed this as the reason for our success in Chase, but keeping Ryan Braun and Prince Fielder in check would be a big step towards victory. I don't know if the plan of attack for our pitchers changed from the first two games. I saw a graphic during last night's broadcast, which suggested that Fielder might have been getting more off-speed pitches. Or maybe not. According to Gibson, "Ian threw [Braun] great.. He fouled the pitch off right in on his hands. He threw a ball right on the inside corner, and Braun threw his bat straight down and made a double. That's good execution. That's good hitting. You've got to tip your hat on that."

That said, if a situation comes up in the middle of the game, with Fielder at the plate, and a base open, I think it's safe to say some more caution might go into deciding whether or not to challenge him. Playing into this may be who is hitting behind him in the Brewers line-up. It has been Rickie Weeks in the first four games, and he has basically been a non-factor. There are growing calls for Roenicke to shake things up for this decisive contest, but we'll see if anything results from this. But the team has shown that they can restrain the big boppers at the heart of the Milwaukee order, and if they can do so again this afternoon, that will be crucial.

Brave/Foolish prediction
This coming down to the fifth game is not a surprise. It's pretty much what I expected coming in, although I was thinking there would be a split in both Arizona and Wisconsin. With the season on the line, expect both managers to be using every weapon at their disposal, so we could see Zach Greinke or Josh Collmenter coming out of the bullpen, as things unfold. These teams remain as evenly matched as we thought, and the result will likely come down, simply to whoever plays better on the day.

With logic offering little to separate them, I'll go with my heart, and say the Diamondbacks will follow in the wake of the Tigers, and pull through with an under-dog victory on the road. Bonus prophecy: look for Justin Upton to play a key role this afternoon.