In the playoffs you don't think about mechanics, you don't think about what a pitcher is going to do. The adrenaline is just flowing. And you have nothing to lose in the playoffs. You're not worried about your stats, you're not worried if you're 1-for-4 or 4-for-4, because you don't care. The only thing that matters every day is only to win. You can go 0-for-4 with four strikeouts... You'll be happier than you would in the regular season. Because then you're in the cage after the game trying to figure things out. It's just a different feel to me. I like playing in situations like this. It's a lot of fun for me, so I just try to live in the moment.
-- Chris Young

Short outing starters
Both Joe Saunders and Randy Wolf lasted only three innings last night. It's pretty rare for that to happen, especially in the post-season, and there's usually extenuating circumstances [such as the opening game between the Yankees and Tigers last week, where rain forced a suspension in the second inning]. The last time it seems to have happened due to performance, was in the third Yankees-Red Sox contest in 2004. There, both Kevin Brown and Bronson Arroyo failed to get past two innings, allowing four and six runs respectively. It also happened in a Game 4 during our 2001 run, in Atlanta, when Albie Lopez and a short-rest Greg Maddux got quick hooks. An omen?

There was some suggestion that the strike-zone was tight last night, particularly for our hitters, but it doesn't seem to have been too bad. Looking at the normalized charts from Brooks Baseball (which use an adjusted strikezone, because it should vary with things like the batter's height), there only seem to have been three or four missed pitches for the D-backs, mostly down at the bottom edge of the zone, and none of those were by Saunders. 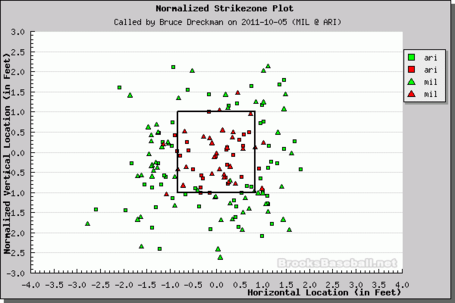 Kirk Gibson was unimpressed with Saunders, and said the decision to remove him was made easier, because the Diamondbacks had two men in scoring position when his spot in the order came up. "We had a chance to score runs. Didn't like the way Joe was throwing the ball; he was elevating, overthrowing the ball. Didn't see any ground balls. And I had a feeling Milwaukee was not going to give in, which they didn't. We had an opportunity to score some runs, so I took advantage of that."

Ron Roenicke has come in for a lot of criticism from Brewers fans for not yanking Randy Wolf quicker, letting him become the first post-season pitcher since Chad Billingsley in 2008 to allow seven runs or more in three or fewer innings. In Roenicke's defense, Wolf has been a slow starter all season: opponents hit him at a .326 clip over his first 25 pitches, but their average dropped to .259 for the next 25, and continued the trend from there (.246 over pitches 51-75,  .230 for #76-100). The difference between him and Saunders is that the latter didn't allow a hit with a runner in scoring position; against Wolf, Arizona had three, which drove in six runs.

Taming Beast Mode, Unleashing the Snake
The Diamondbacks offense has been insane over the past couple of days, posting a collective batting average of .343 in these games at Chase, with a .996 OPS. Almost every aspect of their offensive game has been turned around; for example, their K:BB ratio has been 16:7, a clear improvement over the 22:6 ratio produced in Milwaukee. The net result is that they scored 18 runs in 16 innings of play, and last night, that was highly necessary. From when the franchise came into being, up until last night, teams allowing 11 hits in a playoff game, as the D-backs did, had a record of only 20-51, a .282 win percentage.

Equally as important as our offense recovering its groove, was closing down the heart of the Brewers' order, in Ryan Braun and Prince Fielder. Mission accomplished. After the pair went 9-for-16 at home, combining to both score and drive in six runs, they went 3-for-14 at Chase, with one RBI and no runs scored.  Obviously, they are not the only two hitters in the Brewers line-up: Jerry Hairston, who has gone 6-for-13 with a .500 OBP, has been a surprising contributor. But with Rickie Weeks ineffective, and possibly still not 100%, batting behind Braun and Fielder, it's a lot less more cuddly and less threatening monster, without them.

On the other hand, Justin Upton has been kept pretty quiet as well in the series, going only 3-for-16 thus far, with a .653 OPS. However, the rest of the offense has really stepped up, with five starters currently batting above .350. Leaders so far as Chris Young and Paul Goldschmidt, who have combined to go 11-for-25, a .440 clip, with five home-runs and ten RBI. Young is now the all-time franchise leader for post-season home-runs after his two last night, to give him a total of five. That surpasses Luis Gonzalez's four; Gonzo is the sole other Diamondback with more than two post-season blasts - though with Ryan Roberts and Goldschmidt at two, that might change Friday!

Jarrod Parker = not quite as advertised
After Saunders' quick exit, those of us who were thinking Parker would have been a better bet to start Game Four were feeling quietly pleased with ourselves, and there was some surprise that Kirk Gibson did not turn to Parker at that point, preferring to go to Micah Owings. However, Owings gave Arizona a solid couple of innings, and the zeroes which resulted were absolutely what the Diamondbacks needed at that point. Probably inevitably, he vultured up his ninth consecutive winning decision in the process [and the bullpen ended up with a collective 'quality start', working six innings and allowing three runs].

Then, Parker entered, and we waited for the Milwaukee armageddon that was sure to follow. However, it didn't. Jarrod seemed to have a problem finding the strike zone and threw only four strikes to the four batters that he faced - two of which were returned for hits. It seemed almost as if his pitches were moving too much, and his velocity was also lower than I expected. While he threw almost exclusively fast-balls - nine of the 11 pitches - they averaged only 91.3 mph, and topped out at 92.7 mph. Reports earlier this year has Jerry DiPoto saying  that "Parker's average fastball has been in the 95-96 mph range and he's had games where it has topped out at 100 mph."

Admittedly, one of the two hits was really a fluke one, a chopper that bounced over Roberts' head at third-base. In his post-game comments, Gibson was careful to point that out, and added, "It was a big stage for him. I think he'll be better because of what he went through tonight... I think it will be instrumental and big if we have to use him again." Interestingly, Kirk also mentioned that Daniel Hudson was down in the bullpen at the end of game. If J.J. Putz had struggled in the ninth, maybe Huddy would have got his first professional save?