Diamondbacks 10, Brewers 6: On the Road Again.

Share All sharing options for: Diamondbacks 10, Brewers 6: On the Road Again.

Two days ago, Arizona was done.  Dead.  Gone.  History.  An absolute afterthought of the post-season, lost amid a frenzy of coverage on the Yankees, Matt Moore, Sabathia vs. Verlander, the indestructible Phillies rotation, and Beast Mode.  48 hours later, Arizona has evened their series against the Brewers at two games apiece and will head back to Milwaukee for Game Five after scoring 18 runs in their offense's last 16 innings.  See how the magic happened after the break.  Oh, yeah, I almost forgot..........

Things didn't start off particularly well for Saunders, beginning with a one-out single from the ever-pesky Jerry Hairston after Saunders K'd Corey Hart to lead off the game.  Ryan Braun came up to the plate and did what he's basically been doing all aggravating series long, absolutely demolishing a ball to the left-center field wall for an RBI double.  Braun stole third while Prince Fielder was being "unintentionally" walked, but the hobbling Rickie Weeks came up with the lead-footed Fielder at first base.  Sure enough, Weeks shot a ground ball to Ryan Roberts who started a double play that barely nabbed Weeks at first - I imagine Weeks would have easily beat the throw if he were full-health, but I certainly wasn't complaining.  Keeping Braun from scoring after a one-out double was certainly an impressive feat by Joe, and he gained instant approval points by pitching around Fielder.  Not the greatest start to the game, but it was still a close game.

Then the bottom of the first happened, and it wasn't such a close game anymore.  Willie Bloomquist - who, by golly, is earning every freaking cent of the $900,000 we've paid him this year regardless of my regular-season whining - singled up the middle to lead things off, his third top-of-the-first lead-off single of the series.  Aaron Hill popped up in foul territory to Fielder, but Wolf seemingly pitched around Justin Upton, walking him on four straight pitches to bring up one of yesterday's heroes, Miguel Montero.  Montero poked a single through the right side of the infield, bringing up Paul Goldschmidt - yesterday's big hero - with the bases loaded... again... and little would you expect, but Goldschmidt........

Struck out.  On a horrible third call strike, I might add.  Crap.  No such magic again tonight, right?

Well, Arizona still had an out to play with, and Ryan Roberts - the guy who started the D-backs streak of three straight home games prior to tonight with a D-backs grand slam - strode to the plate with the bases still chucked.  Sure enough, Tatman tattooed one, crushing a line drive shot into the home bullpen in left field to give Arizona a 4-1 lead.  Go ahead and watch it again, I'll wait.

Awesome.  Of course, one of the more under-appreciated aspects of hitting grand slams with two outs is that there are still just two outs after the grand slam is hit, so the bottom of the second inning was certainly not yet over.  In fact, Chris Young strode to the plate and thought that Roberts' idea of hitting a ball over that big yellow line in the outfield looked fun, so he joined the fray by cranking another offering from Wolf to deep left-center for a solo shot that put Arizona up 5-1.  Gerardo Parra grounded out to second to end the inning, but Arizona certainly made up for Saunders' first-inning blips.

Saunders couldn't quite shut the Brewers down again in the second, beginning with an absolutely crushed lead-off double to the vortex of suck known as Yuniesky Betancourt.  Carlos Gomez drilled one to deep center, but CY flagged it down, although the depth did give Betancourt plenty of time to tag up to third on the play.  Betancourt subsequently scored on a ground ball to first base from George Kottaras.  Wolf grounded out to third to end the inning, but the lead shrunk again, to 5-2.  Arizona couldn't get the run back in the bottom half of the inning, as Wolf was wobbly again but worked out of it.  He began the inning by walking Saunders and giving up singles to Hill and Upton, but a Bloomquist double play took Saunders off the base-paths and Montero flied out to left field to end the inning without any more D-backs runs.

Saunders came back out for the third, and was even wobblier than before.  Hart singled on the first pitch of the inning, then Hairston doubled to left to score Hart and Braun was "unintentionally" walked.  Suddenly, the score was 5-3, Prince Fielder was up with two on and nobody out, and things weren't looking particularly promising.  However, Saunders went Super Saiyan on us and pulled out his Veteran Magic (C), getting a flyout from Fielder, a flyout from Rickie Weeks, and god his second-inning nemesis, Betancourt, on a broken-bat infield popout.  Runners on first and second with nobody out and Saunders managed to wiggle out of it.  Needless to say, deep breaths were shared by many a SnakePitter.

Paul Goldschmidt led off the top of the third against Wolf with a single up the middle, then ran on what was practically the first twitch of motion Wolf had in his delivery on the first pitch Wolf made to Ryan Roberts, easily sliding into second after Kottaras couldn't quite cleanly catch the pitch.  Roberts would strike out, but CY walked and Parra moved up both runners with a grounder to Fielder, putting runners on second and third with two out and Saunders' spot in the lineup due up.  Gibson decided to pull his struggling starter for a pinch-hitter (much to the SnakePit's collective delight, it seemed), Collin Cowgill, hoping to capitalize on the runners in scoring position and trusting in his bullpen to hold the lead with Saunders out.  That turned out to be a brilliant decision, as Cowgill shot a single through the left side of the infield to score both runs, re-building the four-run cushion that the big five-run first had initially provided Arizona.  Willie Bloomquist flew out to center to end the inning.

Things settled down a bit after Saunders departed, as Owings took over in the top of the fourth.  Aside from a lead-off single to Carlos Gomez, who would be stranded at third, and a two-out double from Fielder, who was left there due to a Weeks groundout.  Additionally, Marco Estrada came in for Milwaukee and posted back-to-back zeroes, although he did allow back-to-back two-out hits in the fourth before getting RyRo to fly out and end the inning.

Much to some on the SnakePit's delight (mine included), Jarrod Parker came on for the sixth and quickly gave up a lead-off hit to Betancourt, bringing up Gomez.  Gomez pushed a spectacular bunt down the first base line, but Goldschmidt and Hill combined to make a spectacular play in which Goldschmidt fielded the ball and quickly tossed over towards the first base bag with barely a look, getting the ball to a streaking Hill who stepped on the bag just in time to nab a sliding Gomez.  Parker walked Kottaras and gave up a single to Casey McGehee to load the bases with just one out, bringing Gibson back out to the mound and bringing in Bryan Shaw.  So much for the SnakePit's delight, I guess.

Shaw gave up a deep sac fly to Corey Hart that scared the bejeebus out of a rather large crowd of D-backs fans, but still scored just a single run and notched the second out of the inning.  Brewer nuisance Jerry Hairston came up to the plate with runners on first and second, but Shaw was able to induce a soft ground ball to Hill, who stepped on second to get the ending-inning force out.  It was a nerve-wracking inning, but Arizona escaped with their lead cut by just one run, to 7-4.

Chris Narveson, the Brewers' #5 starter during the regular season, came on for his second relief appearance in two days after Estrada was pinch-hit for in the previous half-inning.  Narveson quickly retired Bloomquist on a lineout to left field, but Hill strode to the plate and crushed one over the left field wall above the D-backs bullpen, getting back the run charged to Parker in the previous half-inning and putting Arizona up 8-4.  Upton popped out to Weeks and Montero struck out swinging to end the inning, but Arizona's lead was back at four.

Shaw went back out for the seventh to face the heart of the lineup: Braun, Fielder, and Weeks.  The results?  Wonderful.  Shaw didn't allow a ball to leave the infield, as Braun grounded out to short, Fielder popped up to third, and Weeks grounded out to second.  Heck of a way to go through the 3-4-5 slots of one of the most fearsome lineups in the National League, including a pair of top-10 MVP candidates.  If I had to pick one guy as the early favorite to serve as the primary seventh-inning man for Hernandez and Putz in 2012, it'd definitely be Shaw.

Narveson went back out for the seventh, walking Goldschmidt to lead things off.  Ryan Roberts struck out swinging, but Chris Young certainly didn't - he drilled a 2-1 fastball deep into the left field bleachers, bringing home two more and bringing the score to a nice and relaxing 10-4.  Parra reached base on an error by Weeks to chase Narveson from the game and bring in Kameron Loe, though I personally don't understand why Milwaukee didn't just let Narveson finish off the game and give the bullpen a rest.  As a starter during the regular season, he was more than capable of going the rest of the way.  Not that I'm Ron Roenicke or anything.  Loe came in and finished off the inning quickly, getting a popout from pinch-hitter John McDonald and a force out at second on a grounder to second by Bloomquist.

David Hernandez came on for the eighth inning for some unknown reason, despite the club's six-run lead and his two prior appearances in the LDS.  Hernandez immediately surrendered a single to Yuni Betancourt - his third freaking hit of the day - and a home run to the largely-powerless Carlos Gomez to cut Arizona's lead to 10-6.  Hernandez settled down after the blast, though, getting a strikeout of Kottaras, a groundout from pinch-hitter Mark Kotsay, and a strikeout of Hart to end the inning with no further damage done.

After Takashi Saito worked around a pair of baserunners in the bottom of the eighth, J.J. Putz came on for the ninth, with Hairston, Braun, and Fielder due up.  A four-run lead is a nice cushion, but it doesn't take a lot of imagination to see how that lead to be cut to one after those three are done at the plate, so I certainly understand the use of Putz.  Putz started things off on a sour note by walking Hairston, putting a runner on base for the big boppers that followed.  However, Putz clutched up against the two MVP-caliber bats, getting Braun to fly out to deep center field and Fielder to ground out to second, although Hairston had already advanced to second on the always-asinine "defensive indifference," so the grounder only notched one out.  Weeks popped out in foul territory to Goldschmidt, and the victory was sealed with Hairston left on third. 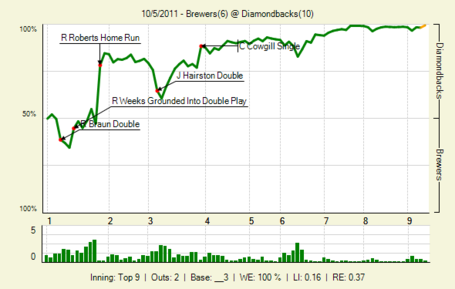 Man, this team is awesome.  Only one green comment, but man was it a good one.  Spelling mistakes are more than excusable given the level of accompanying excitement from this particular point of the game...

"We have to resist it. Do whatever you have to. Cross your fingers. Say a prayer. Think of a basket of kittens. But do not give in to the fear..."

Game Five is at Milwaukee on Friday, game time 4 p.m. Milwaukee time and 2 p.m. Arizona time.  Three things are for certain: I'll be there, you'll be watching, and Arizona will be fighting.  Words can't describe my excitement.