Well, that was amusing. I joined Mrs. SnakePit and around 48,000 of our closest personal friends [plus a few Milwaukee gatecrashers] for a quiet soiree at Chase Field, of genteel socializing and witty repartee, while a friendly game of base and ball unfolded on the green sward in front of us. All terribly calm and civilized, a thoroughly relaxing way to spend the even... Oh, who am I trying to kid. I don't think I've seen such an intense atmosphere at a sporting event, since my days of going to soccer matches in Britain [or, to use the Anglicized term for them, "riots"...] And I thought the roof was going to pop off the place on Goldschmidt's homer. Magic truly does happen.

The omens seem to be aligned for this one. On the highway driving to Chase, we spotted a rainbow off to the left-hand side, and the weather was reminiscent of the general weirdness which swirled around the park during the later stages of Game Seven in the 2001 World Series. There were dust-storms, clouds, showers of rain, gusts of wind - not what you normally expect in Arizona at this time of year. It resulted in the roof at Chase being closed, but that really just served to intensify the atmosphere. It may have helped keep a couple of Brewers' fly-balls in the park, and did not harm to Goldschmidt's, so I'm down with that. 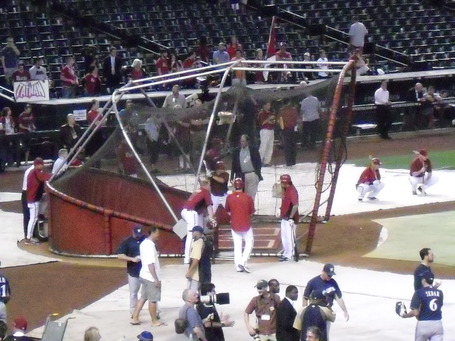 Traffic downtown was a little busy, but not too problematic. Parked at work, and walked through Chase Field, watching a bit of AZ batting practice (above), before emerging on the other side to hit Coach and Willie's. 'skins and Jinnah were already there, staging an Alamo/Masada/Rorke's Drift re-enactment, bravely fending the hordes away from our tables. I think they were glad to see reinforcements arrive. We ordered food, which arrived at about the same time as a heavy rain-shower. Debated running for cover, but having been brought up in Scotland, running from rain seemed a betrayal of my culture. Mrs. SnakePit, however, adopted a unique approach to her dinner:

Emilylovesthedbacks, AZDBACKR and Mr. AZDBACKR joined us, and we dodged the raindrops [or let them pool gently in our salsa, as appropriate]. C&W was certainly busy, even at this early stage, and it was clear that the parking lots were delighted by the sell-out, charging anywhere up to thirty bucks for the privilege of parking. From the upstairs balcony, we also saw what seems to be the Snake Mobile discussed previously on the 'Pit, which was whizzing around the streets at quite an impressive rate of speed for a golf cart with 1,600 square feet of stainless steel affixed to it! 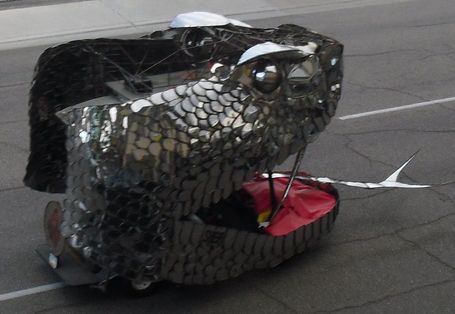 Around 6pm, we headed back in to Chase, splitting up, as unlike SnakePitFests, we were all in different locations - it was already packed, and it took quite some time to make our way to our seats, which were Section 111. Seeing the queues at the concession stand, was very glad we'd eaten at C&W. Everyone coming in was given a red-and-black pom-pom to wave, which was a bit of a mixed blessing. With the majority of the crowd wearing red, it didn't really stand out, and it also made it pretty difficult to watch the game, when the people in front of you are waving them about. However, they do make a great hat.

Got settled just as they were introducing the teams. To no great surprise, Braun and Fielder were booed mercilessly, but there was a sterling ovation for one Brewer, the much-loved Craig Counsell. Needless to say, the D-backs were cheered to the rafters, with particularly loud cheers for Ian Kennedy, Justin Upton and Ryan Roberts. Dr. Jesse Maguire played the National Anthem before the game - more echoes of 2001 - and nailed it totally, with the crowd actually singing along, which is kinda rare. Finally, it was time for the game to start. 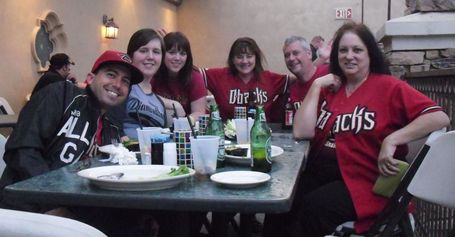 Josh Collmenter seemed to have trouble throwing strikes early on. He walked Braun then a pitch to Fielder got too close to the gravitational well, and the ball was sucked over the event horizon. [Can I just say the "275 lbs" allegedly claimed on the scoreboard for Fielder's weight would only appear accurate if he had been the victim of an unfortunate accident involving a band-saw and his right leg] However, he settled down, struck out Weeks, and the D-backs wasted no time getting on the board. I think someone must have had a word with Montero, because his swings were much, much better today. An RBI from him and Goldy, and we had our first lead of the series.

After a scoreless second, things got nervous with a solo homer for the Brewers, and the meat of their order coming up. However, Collmenter handled them, and we got the run back with Montero's second hit of the night. Of course, this wouldn't be a D-backs game without an out on the basepaths, and I am led to believe that an ill-advised attempt to advance by Montero, led to Upton getting thrown out at home. I didn't actually see the play in question, as the guys in the row in front were still standing up after Montero's RBI - they seemed fairly unclear on the concept of when to stand and when to sit. Maybe this information could be relayed on the scoreboard?

Fast forward to the bottom of the fifth, Collmenter keeping the Brewers in check, and leads off with a single. Another one by Bloomquist follows, and one out later, Upton's grounder advances the runners, at the cost of the second out. This is where I think Montero's good at-bats previously really paid off. If he'd been hacking like he was in Games 1+2, there'd have been no question, but he now was a legitimate threat. On the post-game show, Paul Gambadoro said that intentionally walking Montero was "absolutely the correct thing to do" - which is why he is a talk-radio host. It's very rarely the case, and P. Goldschmidt, Esq. demonstrated exactly why. But you know this already. :) 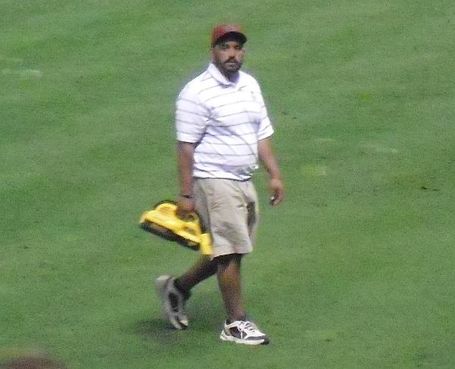 Yes, they were using Dust Busters on the turf at Chase before the game

And that's when the atmosphere in the stands - in our section at least - got...interesting. It seemed like a certain vociferous sub-set of Brewers fans had swanned in expecting a sweep, and had been making asses of themselves, e.g. "beast mode" for every Milwaukee hit. Now, I've no problem with you being loud and/or obnoxious in my 'house' - but if the game unfolds against you, you can certainly then expect to get what you've been given. This seemed to sit very badly with some Brewers supporters, and security was kept busy intervening between the rival fans.  It's not something I've ever seen at Chase before; perhaps some Cubs games came close

Generally, it's a very (perhaps too) laid-back crowd. Was it the playoff atmosphere? The attitude of the Brewers' fans? Too much alcohol? Likely a combination of all these things: certainly there was at least one AZ fan in the row in front, who could well have been described as drunk and belligerent, so I can't pretend the local supporters were entirely innocent. When leaving the front of the park on the way to C&W, I noticed fans there being wanded with metal-detectors. Nothing like that at the back, which seemed odd. Also, if you did want to sneak anything into Chase, we noticed they don't seem to search your bags at the re-entry gate...

To be honest, after we'd blown the game open 8-1 by the end of the fifth, watching the argy-bargy in the stands was probably more interesting than the contest. Hernandez and Putz finished things off, and Roger Clyne came out of the stands to sing us a live version of D-backs Swing, which was nice [Larry Fitzgerald and Rickey Henderson were also present for tonight's game]. I did get some video of said shenanigans, but YouTube is in 'read only' mode, so you'll have to make do with this, which I think is as appropriate as kishi's "Still Alive" link...