Being down 0-2 is never fun. Especially when your pitching has been struggling, your bats haven't shown up, and you're on the edge of elimination. But a change of scene sometimes is just the sort of thing that you need to shake things up, and the DBacks came home looking for a chance to catch their breath and fight back against the Brewers. And that's exactly what they got...

First inning started off strong, with Collmenter getting two quick outs from Cory Hart and Nyjer Morgan. The Brewers looked like they might threaten to score, drawing a walk for Ryan Bryan and Prince Fielder taking a HBP that the radio crew said he leaned into, but Collmenter pulled off a swinging K to send the Brewers down without problems.

The Diamondbacks started the game off strong at the plate. Willie Bloomquist led off the game with quck single, and then- to the echoing cries of "TOOBLAN!"- took second base on a quick steal, just beating Rickie Weeks's tag. Two quick outs followed, and it looked like we might strand our own RISP, but Miguel Montero stepped up and hammered a two-out pitch off the center field wall to bring Bloomquist, and give the Diamondbacks their first lead of the series. Paul Goldschmidt followed that up with a single to right field that was just enough to get Miggy around from second, and the DBacks ended the inning up 2-0.

The second inning went quickly for both teams, with some disputable strike calls from behind home plate. Cory Hart started the third off by parking a pitch in the left field bleachers to cut the lead to 2-1. Collmenter didn't let it rattle him, though, and worked through the scariest portion of the Brewers lineup to get his next three outs from Nyjer Morgan, Ryan Braun, and Prince Fielder.

On the other side of the game, Shaun Marcum seemed to be cruising along, sitting down five straight after letting in the DBacks second run. But that may have been a bit of an illusion- he worked to a three ball count on four straight batters, including taking Josh Collmenter to a full count from 0-2. Two of those batters took walks, and Miguel Montero came up with a runner on second again, and a shot to help out the team. Miggy didn't wait long enough for Marcum to get to 3 balls, taking a 1-1 pitch up the middle to give the DBacks a 3-1 lead and runners at the corners with one out. Marcum's control continued to struggle, but this time the DBacks aggressiveness on the bases bit them. Miggy broke for second on a pitch in the dirt, and J-Up went home on the throw, but a good play by Rickie Weeks had Upton dead at the plate. A pop out from Goldschmidt ended the inning, but the DBacks still got their run back, up 3-1.

After Goldschmidt's out, the pitchers both settled in a little bit, trading 1-2-3 innings until the bottom of the fifth. Josh Collmenter started the inning off with a single to right, and as he stood on first looking a bit surprised, Willie Bloomquist followed it up with a single to center to put two on with nobody out. The Brewers started to loosen an arm in the bullpen, but Marcum stepped up to get a K looking from Aaron Hill and a ground out from Justin Upton. An intentional walk to Miguel Montero brought Paul Goldschmidt to the plate with the bases loaded, and, after Marcum and Lucroy argued over what pitch to throw...

Paul made the Brewers pay for walking the man in front of him, taking a 1-2 pitch over the right field fence for a grand slam, ending Shaun Marcum's night. 4.2 innings, seven earned runs, and not the greatest outing for Marcum.

Kameron Loe came in for the Brewers, and got a ground ball to third from Chris Young- which was promptly thrown away by Jerry Hairston, Jr. CY took second on the throw, and then stole promptly stole third. A single up the middle by the Dread Pirate Ryan Roberts neatly evaded the gloves of three Brewers players to find center field, and all of the sudden, the DBacks were up 8-1.

Meanwhile, on the other side of the field, Josh Collmenter was kicking ass and taking names. He gave up a leadoff walk in the top of the sixth, but buckled down against the bulk of the Brewers lineup, getting Braun, Fielder, and Weeks out, including a nasty swinging K by Fielder. He followed that up with a 1-2-3 inning in the seventh, and ended his night by putting up seven innings, only allowing two hits, two walks, and one run. Just the sort of outing we needed.

David Hernandez came in, facing former Diamondback Craig Counsell, and while the Brewers got ahold of a few pitches, Justin Upton was there to grab them in the outfield, and then J.J. Putz came in to pitch the ninth. Prince Fielder reached on a one-out hit that could have been called an error, Rickie Weeks grounded into a fielder's

So, backs against the wall again, and the DBacks fought back, like they have all season. Plenty of contributions from the offense, as every starter reached base except for Gerardo Parra. Goldschmidt's five RBIs will draw the most attention, but Miguel Montero's evening was pretty big, too. The DBacks also put up fantastic pitching all around, the Brewers were held hitless from Cory Hart's leadoff home run to start to third until Prince Fielder's hit in the ninth. 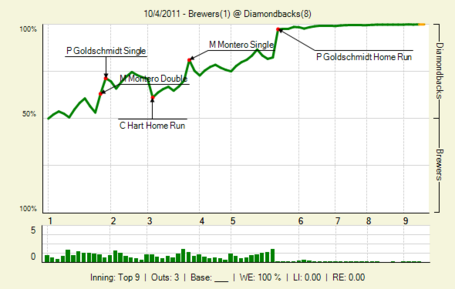 Comment of the night, going a little outside the box here. While we had a few good comments in the thread- honorable mention goes to shoewizard for pointing out that while Fielder may have been hit in the fleshy part, they're all fleshy parts for fielder- we'll award it to Daniel Hudson for his post-game tweet:

I couldn't have said it better myself.

So, a need to win game, and the team stepped up. The Brewers looked more vulnerable than they ever did in Milwaukee, with a few cracks showing up on their offense, their defense, and their composure. Can the DBacks take advantage of that tomorrow? We'll see what Joe Saunders can do.

What else can we say? This was, in fact, a triumph. And our boys are still alive.