[Although I was just 10 years old during this game back in 2001, I remember the game clear as day (We had Skyline Chili for dinner that night) I also am recapping this watching the DVD replay...]

With a chance to take a 3-nil Fall Classic lead in Game 3, 3+ Hours, 3 Total runs, 3 Arz Hits, 3 Arz Errors, and 13 Dback Strikeouts would make for a lousy first showing at Yankee Stadium. Details about the World Series' first ever Mischief Night game following the Jump.

Well our NL Champ 2-0 Diamondbacks played the first of three at Yankee Stadium, and the showing was less than spectacular. 20 win Roger Clemens looked on his horse tonight, K'ing 9, but looked human early on as the Diamondbacks attempted to start a first inning rally. Yankee gaffes would hit early, as Counsell would hit a grounder that Soriano bobbles to give him first base. Arizona gaffes would also start that inning when Counsell would slip trying to get back to first on a pickoff attempt. Finley walked, but would be thrown out as a part of a strike-em-out-throw-em-out. Yankees would also attempt to score in their half off Brian Anderson, but Tino Martinez flies out to a sprinting Finley stranding one in scoring postion.

The Rocket would be just that for most of the game. (although FOX commentators Joe Buck and Tim McCarver would argue how 'comfortable' he was)  In the 2nd and 3rd, barring a single from DH Erubiel Durazo, Clemens would effectively shut down our offense and key a long night of limited, yet missed opportunites.

Anderson would make his first mistake of the night in the 2nd, when Posada homers to left. Anderson would allow a single later on in the inning, as well as a single in the 3rd, but thankfully was able to get out of both jams. B.A. would be effective, but a tad shaky all game. It didn't seem like the 'Awe-factor' effected Brian Anderson much, but it did effect defense and in particular, Damian Miller. Miller would drop or miss three pop-ups near him, as well as missing balls in the dirt and allowing runners to move up.

In the 4th the Diamondbacks would finally plate a run. Finley starts off with a full-count walk, and Gonzalez single to put 2 on and one out. Sanders flies out which moves Finley to third. A patient at bat by Durazo loads the bases for Williams. Matty gets about 20 feet away from a grand-slam, but it is still good enough to score Finely and move gonzo to third. Mark Grace is unable to capitalize and grounds out to Soriano.

The bottom 4th would be dangerous for the Dbacks. After two quick outs, Spencer fouls to Damian Miller to end the inning Miller whiffed on the pop-up allowing Spencer to reach a pitch later on a walk. Anderson would again be unlucky with a grounder from Scott Brosius. Tony Womack decides to forget all basics on fielding for a moment and fails to trap the ball in his glove. Another free out for the Yankees.

And in the weirdest play of the night, rookie Alfonso Soriano popped up to Miller in fair territory. Thinking someone else would field a ball that he is standing under, he looks around before the ball falls to his left in fair play. Shane Spencer runs across thinking he scored, but, thanks to the wind of New York City, the ball rolled foul without anyone touching the ball. Anderson and the rookie would lock horns and battle for 10 pitches before B.A is able to get Soriano to fly out to Fins in center.

After a quick 1-2-3 5th from both teams, the 6th inning Diamondbacks would get their chance to take the lead multiple times but miss out. With 2-outs, Sanders is hit by the pitch (to the satisfaction of the 'good-sporting' Yankee crowd nearby) and moves up to second a few pitches later. Durazo would slap a infield single to Soriano who dives to keep control and prevent Sanders from going farther than third. Williams hits a sure-fire single to left...until left-field newbie Shane Spencer is able to make a diving play to rob a lead from the Diamondbacks.

Bottom half of the inning would be the decider; Bernie Williams slaps a grounder to Womack that he ranges over to grab, but doesn't have enough on the throw to get Bernie at first. With Tino Martinez up, The third pop-up to the catcher would be mis-played, with Mark Grace and Miller colliding to give Tino another shot. Luckly for B.A, he would fly out to the warning-track to right. A wild pitch would move Bernie into scoring position with Posada up, and he eventually walks. Brian Anderson, who clearly lost all composure and stamina is replaced by 'Mo-man' Mike Morgan.  Morgan would get PH David Justice to strike-out, but Scott Brosius would get a broken-bat base hit into leftfield to give the Yankees a slim lead. Morgan would make things interesting, by throwing one into the dirt past Miller to advance the runners up. Soriano would ground out Womack to end the threat.

Brenly would be happy with Anderson's performance, saying afterword:

"He went out and pitched a tremendous ballgame and gave us a couple more innings than we thought we were going to get out of him," Brenly said. "The cool temperature allowed him to pitch deeper in the ballgame than we anticipated, but you have to put runs on the board to win the game and we weren't able to support our pitching tonight."

Clemens would end his night on a high note, as he forces Grace to fly out harmlessly, before striking-out Miller and Womack to the delight of the invigorated Yankee faithful. Morgan and Swindell would hold the Yankees in the 7th allowing just a single to Veteran Paul O'Neill.

Mariano Rivera, in for the 2 inning save, would make short work of the Diamondbacks and actually, make them look quite foolish. Counsell bunts, but Rivera sprinting grabs the ball and tags a diving 'Rudy' at first. He would strikeout Finley and Gonzalez to end the eight, and he would strike out Sanders and Durazo before getting Matt Williams to ground out to Jeter. Well if we took one thing out of this game, its that we better have the lead before the 8th because the Yankees are 155 and 1 all-time in post season play after leading at that point, thanks to the unhittable likes of Rivera.

Schilling on the mound for Game 4, should be interesting. Picture of the Game: 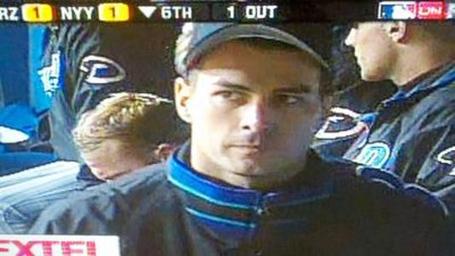 Huh, i forgot who this player is, but he almost looks like Paul Gol.... what was I saying again? (Click picture to go to a less blurry photo)