What're the Odds? Coming Back from a 0-2 Deficit

Share All sharing options for: What're the Odds? Coming Back from a 0-2 Deficit

The Diamondbacks find themselves in the unenviable position of being down 0-2 in the NLDS. Their backs are against the wall because of the short series format; the first two games go to the team with home field advantage, then two at the other team's home, then back to the first location. The Brewers did exactly what you would expect a team to do: play well at home. Now it puts the D-backs on the brink since the series is only 5 games.

You know all these details. The 5 game series has been part of the baseball format since 1995, when MLB added an extra round to the playoffs in an attempt to create more excitement after losing the World Series to a labor dispute the year before. Since 1995 there have been 64 completed series in the first round. The D-backs are playing in their fifth NLDS. Again, you know all of these. What you might not know is the likelihood a team comes back from an 0-2 deficit in a 5 game series.

Like I said above, there have been 64 total 5 game series before this year. In a 5 game series, there aren't many possible outcomes, but when a team goes up 2-0 on the series there are only 4 possible outcomes for the other team: they get swept (win no games), win 1 game, win 2 games, or somehow win all 3 remaining games. As you can imagine every subsequent game should become more difficult, given that it is another opportunity for the leading team to get the series win. To use a tennis term, every game is a match point. The leading team (the Leader from now on) needs to only win one more game to move on. The other team (the Opposition from now on) cannot afford any mistakes.

So let's look at what has come before and figure out the previous odds that the Diamondbacks can reach each outcome. It's not scientific; although there is a larger sample for getting swept, each series has different qualities that might change the outcome odds in the future.

The most likely scenario at this point is that the D-backs get swept. Unfortunately, a first round sweep is a very likely scenario in all situations. Of the 64 previous series, 27 were sweeps. In other words, 42.2% of all 5 game series result in the Opposition winning no games. When you look at all the series with the Leader taking the first two games, the situation becomes even more dire. 41 series have had one team jump out to a 2-0 lead (65.9% of the time). From here 27 of those 41 series ended in a sweep. Obviously any sweep would have to start with the Leader getting a 2-0 lead, but 65.9% of the time the Leader also takes the next game.

In other words, two thirds of the time the Opposition gets swept after dropping the first 2 games. The Diamondbacks are going to have to fight to even get to Game 4.

The second most likely scenario is the Diamondbacks get 1 win. This means that Collmenter will have to be sharp, and the offense clicking, if the home team hopes to see a Game 4. It's just not a particularly likely occurrence. Of the 41 series starting 0-2, the Opposition has managed to win the next game only 14 times. So 34.1% of the time the Leader fails to capitalize on the Match Point.

That might seem like a little ray of sunshine, but keep in mind that winning only 1 game has happened 9 times. In other words, 22% of the time the Opposition only wins one game.

There have been only 5 instances where a team has gone down 0-2 in the League Division Series, but then gone on to win 2 games. If the Diamondbacks want to force a Game 5, they'll have to hope to be in that 12.2%.

So here's a rundown of the various percentages I've tried to sprinkle above:

And for the visual people: 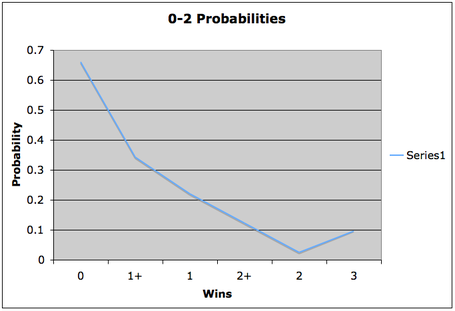 Hopefully the Diamondbacks will win out. The odds aren't good, but it certainly isn't impossible. Sure, it doesn't happen often, but there haven't been many teams that have even gotten an opportunity to try it. And we can't take the failures of previous teams and expect that it will full predict what the Diamondbacks will do.

Yes, this was a depressing piece to read (and write, let me assure you). But I thought people might want some numbers to help contextualize if the Diamondbacks do pull off a tremendous upset. We're down now. But Tuesday's another day.