The score pretty much says it all, though this game was tied until the 6th inning. Home runs from Paul Goldschmidt, Chris Young, and Justin Upton just weren't enough when the Brewers brought an offense, too. Gory details after the jump.

The Diamondbacks wasted another opportunity in the bottom of the 1st, though it may well have ended up not mattering given what later transpired. Willie Bloomquist struck out to lead off the game, though he nearly reached when Jonathan Lucroy dropped strike 3. Aaron Hill followed it up with a double off the LF wall that Ryan Braun immediately fired back in to 2B, but the extra umpiring brought in for such things turned out to be just as unreliable as the regular umpiring, calling Hill's drive foul even though replays showed it was pretty clearly fair by a few feet. Unfazed, Hill followed it up with a single. Also unfazed, Zach Greinke got a foulout and strikeout to strand the runner.

Daniel Hudson's 1st inning issues remained, as Corey Hart led off with a leadoff single, and then Braun whacked a 1 out homer to give the home team a 2-0 lead after 3 batters. Ryan Braun is now 6-8 with a HR against the Dbacks in this series. Paul Goldschmidt gave Dbacks fans a little hope by homering to lead off the 2nd -- though the Dbacks wouldn't score again until the 4th, despite a Ryan Roberts double and another Hill single. In the bottom of the 3rd, though, Braun barely doubled by Upton, who whiffed on trying to cut it off, and it came back to hurt when Prince Fielder hit a ground ball single up the middle to score Braun. In what would become a pattern, both hits came with 2 outs, as did Rickie Weeks' triple to score Fielder on a fly ball that turned CY around in CF. Score: Brew Crew 4, Dbacks 1.

Unlike Game 1, though, the score didn't stay there. CY atoned for the triple by hitting a solo shot with one out in the 4th. Roberts followed it up by a single and went to 2B on an error, but Greinke easily caught him trying to steal 3rd base for the 2nd out. Hudson pitched around a Greinke single for a scoreless 4th. In the 5th, Hill reached again and Upton did something with it, slamming a pitch deep to LF to tie the game. Things were going okay until 1 out in the bottom of the 6th, when things REALLY went south.

With one out in the 6th, Hudson committed the sin of allowing Jerry Hairston Jr. to double. Despite only having thrown 93 pitches, Kirk Gibson, perhaps overreacting to letting Ian Kennedy pitch to Fielder yesterday, pulled Huddy and brought in ROOGY Brad Ziegler...to face Yuniesky Betancourt, one of the worst hitters in the majors. While pitching to Betancourt, Ziegler set up to pitch, then, in the midst of his high leg kick, paused, spun around to 2nd, and was promptly called for a balk. At this point, it was already starting to look like a poor decision to bring in Ziegler, but when he walked Betancourt for just the 17th time this season (WHAAAAT???), it looked even worse. Don't worry; we had no idea how bad it would get. Lucroy laid down a safety squeeze that Ziegler fielded and threw home off-balance, trying to catch Hairston, and threw well past Miguel Montero, which meant not only giving up the sure out at 1st base but letting Lucroy go to 2nd. Mark Kotsay pinch hit for Takashi Saito, and was intentionally walked; I guess to set up a double play. With the score only 5-4, the Brewers responded by getting 3 straight ground ball base hits up the middle -- I mean, if you're trying to get a DP, you wanna induce a ground ball, but not only were these hard hit, they were hit exactly where nobody was fielding. Corey Hart, Nyjer Morgan and Braun made it 9-4 before Gibson finally pulled Ziegler, having not retired a single batter. An easy time to pull Ziegler might've been after Hart reached and the score 6-4, since Ziegler tends to be pretty bad against lefties like Morgan. Joe Paterson came on, struck out one batter (Prince Fielder) and left, then Bryan Shaw came in and retired Weeks to finally end the inning from Hell.

So, you have Gibson probably making an overanxious move by pulling Hudson after a 1 out double, (despite facing the #8 and #9 hitters next and having posted a 1-2-3 5th inning) then you have Gibson NOT pulling Ziegler while balking, erroring and walking two en route to letting all 6 of his batters reach. That included facing two lefties. Think Gibson would've allowed Paterson to face two righties? Then, with 5 runs already in the bank for the Brewers, Gibson burned two pitchers to face two batters. He went from overmanaging to undermanaging to suddenly overmanaging again, in my opinion. On top of it, the pitcher's spot led off the next inning, and despite a 5 run deficit and nobody on base, we were treated to a Sean Burroughs pinch K.

Against LaTroy Hawkins, after Burroughs, Willie Bloomquist and Aaron Hill both walked, and Willie B stole second during Hill's AB. Upton and Montero couldn't do anything, and the Dbacks didn't score. Micah Owings, who just as well could've pinch hit for himself, pitched a 1-2-3 7th. Francisco Rodriguez walked Goldschmidt and gave up a single to CY to start the 8th, but once again, the Dbacks did nothing with it, Roberts, Parra and PH Geoff Blum going down in order. David Hernandez pitched a 1-2-3 8th, and though John Axford walked Hill and Montero, he struck out Goldschmidt to end the game.

Though there weren't too many particularly egregious umpiring mistakes after Aaron Hill's non-double call, (most commenters were ambivalent about the balk call on Ziegler) the strike zone wasn't without its discrepancies between Hudson and Greinke, although that was better than yesterday, too. It's pretty tough to justify extending the zone during Goldy's 9th inning AB:

Given that those first two were called strikes pretty clearly off the plate, it's no wonder Goldschmidt swung at whatever came next. (A low slider, in this case) As noted, however, the strike zone was certainly more consistent than Saturday's game. Perhaps yesterday's Montana-sized zone explains why Brewers pitchers walked 5 Diamondbacks today, expecting all strikeouts looking.

In some ways, we can break down today's game to simple hitting w/ RISP. During the regular season, the Brewers had a .774 OPS in that situation, the Dbacks a .750. (National League average was .723, though that isn't park adjusted, of course) In this game, the Diamondbacks had an .083 OPS w/ runners in scoring position (0-11 with a walk). The Brewers, on the other hand, had a 1.414 OPS w/ RISP (5-9, 1 triple, 2 walks and a reached on error). That's the difference in this game. Despite the Brewers being perceived as a slugging team, we outhomered them 3-1, and were outscored by 5 runs even though we had the same number of baserunners and more chances to drive in runs. 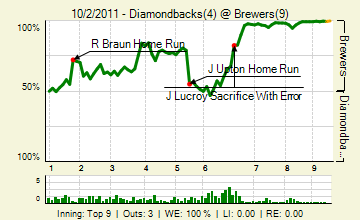 A puppy get tortured.

So, the series comes to Arizona on Tuesday at 6:37PM for at least one game. Let's hope we survive to see a Wednesday game at least.