Well, that went well, didn't it? Let's review the things we should have learned from Game 1:

Ah, there's the offense...
It appears Daniel Hudson is approximately equal to Zack Greinke on short rest. Credit to Paul Goldschmidt, Chris Young and Justin Upton for taking advantage and going deep. Greinke only allowed five home-runs in the entire regular season to right-handed batters, so three such long-balls in one game is good stuff. Aaron Hill reached base all five times he was up, on three hits (or four, including his double, below, rejected by the sixth umpire - good to see them justifying their pay) and two walks, and it was good to see Chris Young get his offensive stroke in order with three hits. All told, ten hits and five free passes was certainly an improvement on the first game. However... 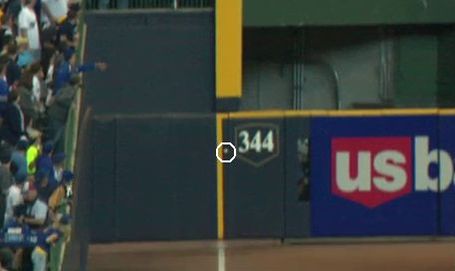 That's now a total of 23 strikeouts in 66 at-bats this series, and we were abysmal in the clutch going hitless with runners in ten attempts with runners in scoring position. Thus far, the only hit we've managed with RISP was in the first inning of the opening game - the hit that resulted in Willie Bloomquist being thrown out at home-plate. In terms of battling, the two best plate appearances the Diamondbacks had this afternoon were perhaps Daniel Hudson's 10-pitch effort in the second, and Bloomquist's 13-pitch walk in the seventh. In contrast, Gerardo Parra saw only 13 pitches all game, going hitless in four PAs with a couple of K's.

And speaking of 0-for-4 with two strikeouts, Miguel Montero is not a good post-season clean-up hitter. Small sample size, but he's yet to get a hit in seven at-bats with four strikeouts. Miggy appears, in both games, to be trying to hit the ball out of the park in every plate appearance, swinging at just about anything. The production from the two teams' #3 and #4 hitters has really been the key difference thus far in the series:
Milwaukee: 9-for-16, six RBI, six R
Arizona: 2-for-17, two RBI, one R

There goes Hudson
Daniel Hudson's first-inning struggles are a matter of record, and this afternoon was no different, with two more being added, courtesy of Ryan Braun. In 34 first innings, including yesterday, Hudson has allowed 29 runs and has an ERA of 6.35 there, and 3.29 the rest of the way. Maybe we should have sent Jarrod Parker out there for the first inning, and then replaced him with Hudson at the start of the second?

So much wrong in that sixth inning for the Diamondbacks. Firstly, after leaving Kennedy out there too long in Game One, it was almost as if Kirk Gibson swung wildly the other way, yanking Daniel Hudson too early. At 93 pitches, Hudson was well within his normal frame of reference, and the previous, fifth inning had been his best yet, retiring Morgan, Braun (backward K) and Fielder in order. Getting Weeks to open the sixth, made it five in a row for our starter, but a double to Hairston led to a rapid visit from Gibson and the hook for Huddy, even though the bottom of the Cardinals order was coming up.

Hudson seemed to think he could go on - though, as we saw yesterday, a pitcher's opinion is not necessarily accurate in these things. He said, "I felt like I had enough left to at least get a couple more outs. But it wasn't my call, obviously, so I don't know." Certainly, if you look at Hudson's pitch velocity, as shown in the Brooks Baseball pitch f/X graph below, there's little or no evidence that he was running out of gas. 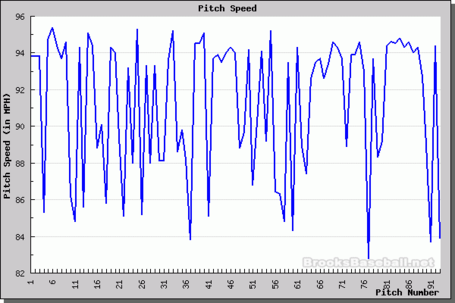 The implosion of Brad Ziegler
Okay, so who do you bring in, with a runner on second and one out? If you chose to give Brad Ziegler his second successive day of coming in as first relief of our starters, than you're the winner. However, blue bulldog summed up the counter-arguments in the GDT:

There are so many reasons to not put in Ziegler. You waste your ROOGY on the shittiest hitter in the lineup. He’s coming in from the bullpen, so his command isn’t going to be as good as if he’s gotten some hitters to pitch to. It’s not even like he’s your ace reliever. You have no one on 1B so it’s not like you need a groundball. In fact, you’d rather have the flyball pitcher out there, because you don’t want to randomly let the guy on second advance.

And then he balked. That was only the fifth post-season balk by a reliever since 1998, and while you probably couldn't argue with the call, Ziegler was unimpressed. "I honestly don't know what he called. I didn't ask him about it. "I didn't feel like I balked. I felt my (front) foot came down on top of the rubber, so I felt I was clear of my back foot at that point. It didn't matter after that." Ziegler didn't make a fuss, apparently because he did not want to be ejected for arguing. However it might have been better for Arizona if he had been.

For it seemed to rattle our relief pitcher horribly. He walked that batter on four pitches, and then made a terrible play on the sacrifice bunt. Rather than taking the sure out at first, and perhaps limiting the damage to one run, he threw wildly home, when there was no play, and missed Montero badly. So, instead of a man on second and two outs, there were two men in scoring position, and still only one out. Brad should have been removed from the game at that point.

However, Gibson left him in there, and after an intentional walk (as we discussed yesterday, "generally, an intentional walk is a poor strategy"), the Brewers then got three hits and three further runs from the next three batters, without Gibson stirring. Admittedly, that took a total of four pitches, but one wonders if this inertia is his lack of post-season experience? Especially in a best of five series, you can't afford to let games career out of control like this: when a pitcher clearly isn't working, go to the next one. Instead, Ziegler was left in to become the first reliever in the history of the post-season to face six batters without recording an out.

Conclusion
We knew that playing in Milwaukee wasn't going to be easy, but the Diamondbacks lost those two games more than the Brewers won them, with a lack of clutching hitting, poor pitching from both starters and Brad Ziegler, and a number of questionable decisions by the coaching staff. At the moment, I'm simply left hoping we don't get swept. Anything more than that, seems premature. And can I just say, doing that whole 'Beast Mode' thing, it seems every time the get even the most meaningless of hits, is immensely irritating? I never thought anyone could make me root for the Phillies, but if the Brewers end up getting to the NLCS, it might just happen...